The strength of party brands means that fighting for marginal districts is now much more expensive for candidates.

Concern about party polarization in Congress is by no means new, but using new research, Henry A. Kim and Brad L. LeVeck argue that it can also lead to more expensive campaigns for incumbents in marginal districts. They maintain that while strong party branding makes it much easier for candidates to communicate their ideology in districts that like the party, in competitive races, incumbent candidates must work hard, and spend more, to present more information to show that they are closer to their district’s preferences than those of their party.

Over the past four decades, parties in the U.S. Congress have become increasingly polarized:  the Democrats have moved further to the left while the Republicans have moved much further to the right. Meanwhile, there is very little evidence that the US public has become similarly polarized. This means that the two parties have moved further away from the average voter, leaving one to wonder whether Democrats and Republicans in the US Congress pay any cost for such behavior.

In a recent study, we find that there literally is a monetary cost to polarization. Incumbents have always had to pay some cost of campaigning, largely to communicate their record to voters. However, thanks to polarization, incumbents in competitive districts now have to spend much more than they used to in order to assure voters that they are different from the rest of their parties. 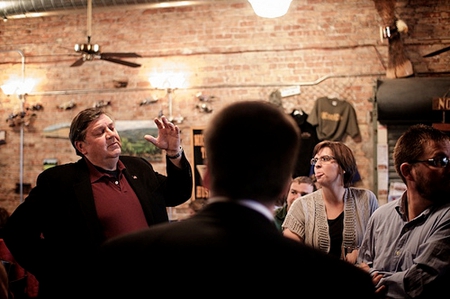 To explain the logic behind our findings, it helps to use an analogy: Party labels are like brands. When a consumer sees the word “Starbucks” on the front of a shop, they instantly know what they’re going to get if they walk inside. Similarly, placing the label “Democrat” or “Republican” on a politician helps voters know what they’re going to get if they vote for that politician. Vote for a Republican, and you’ll likely get lower taxes and less regulation on business. Vote for a Democrat and you’ll likely get more spending on social services and increased environmental protections.

However, labels aren’t always informative. The Starbucks brand is informative because Starbucks produces a highly consistent product, with little variation from store to store. No matter where you go, you pretty much know what a cup of Starbucks’ coffee will taste like. Likewise, a party label is more informative if politicians from that party vote in a highly consistent fashion. In effect, polarization has made party brands more informative to voters because there is less variability in how politicians from each party vote. To see this, consider Figure 1 below: 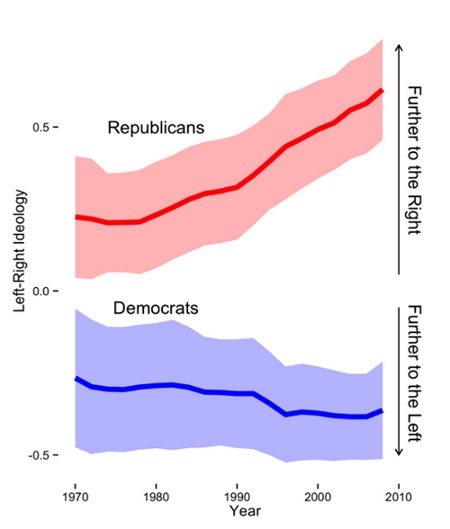 Each line plots the mean DW-Nominate score for each party in each year from 1970 to 2008. DW-Nominate scores are a common measure of a legislator’s inferred left-right ideology, based on his or her voting record. Here we see a well known pattern: since the 1970’s the parties have moved further apart, with much of the movement coming from the Republican Party. However, there is also another important trend in this data. The colored band behind each of the lines shows the standard deviation in each party’s DW-Nominate scores. This is a statistical measure of how much voting records vary within each party. The wider the colored band behind each line, the more variable a party is in terms of how its members vote. For example, the band is very wide for Democrats in the 1970s because House Democrats in this era varied quite a bit on whether they voted as an economic conservative or as an economic liberal. Over time, however, the band for each party has become narrower, as there is less ideological variance within each party: Democrats vote more consistently for the same left-leaning bills while Republicans vote more consistently for the same right-leaning bills.

Because there is less variability in the ideological makeup of each party, voters now have a better idea about what they will get if they vote for an incumbent from a particular party. Even if a voter knows nothing about the incumbent’s actual voting record, it is an increasingly good guess that the incumbent voted like other members of his or her party.

For incumbents in districts that like their party’s “brand”, this is very helpful, as these incumbents can largely ensure their own re-election simply by having the right party label next to their name on a ballot. These incumbents do not need to engage in a lot of additional campaigning because voters automatically associate them with a likeable party.

However, for the incumbents in districts that dislike their party, life has become much more difficult. Like the owner of your local Starbucks franchise, these incumbents may need to spend more money differentiating themselves from the national brand when that brand is locally unpopular (as an aside, a number of Starbucks stores have actually faced a similar problem in the recent past).

To distinguish themselves from the rest of their party, incumbents can create a personal voting record that is much closer to their district’s preferences. However voters do not automatically find out about the incumbent’s record.  Instead, incumbents have to inform voters about their record through costly campaigning. Furthermore, due to the growing strength of party brands, voters are increasingly certain that members of a particular party all act according to a similar ideology. To change these voters’ minds now, incumbents have to present even more information about their own record through more stump speeches and campaign ads, which, again, cost more money.

Figure 2 below provide a general illustration of the trend we’re describing.  Each dot in the plot below represents the amount that a House incumbent spent on campaigning in a particular election (adjusted for inflation). The horizontal axis is a common measure of district partisanship, the vote share received by an incumbent’s party in the last presidential election. In effect, this is a rough proxy for how well a district likes the national party brand of an incumbent (it also happens to correlate highly with more sophisticated measures). 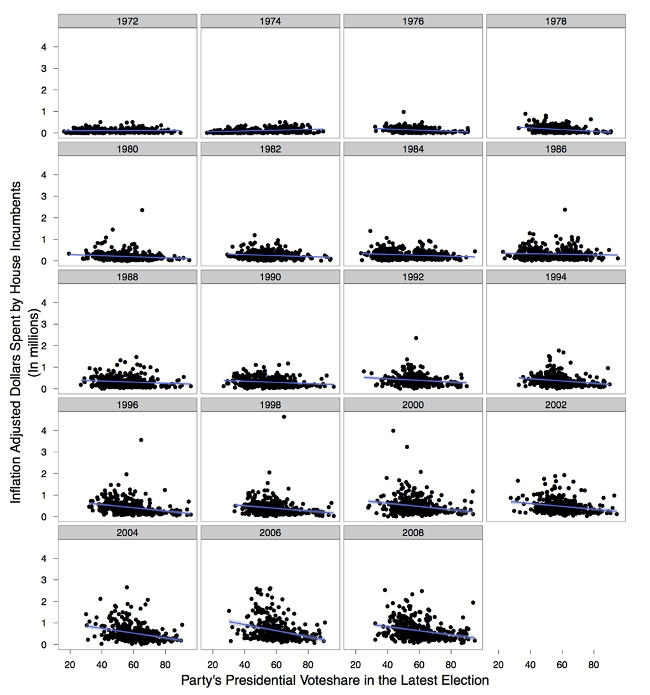 In the 1970’s, party brands were fairly weak and diluted, and the relationship between district partisanship and spending was essentially flat. There was essentially no relationship between how much district liked and incumbent’s party and how much that incumbent spent on their campaign.  However, by the 2000s parties had become more cohesive in the way they voted, and, as a result, party brands had become much more informative. In districts that favor an incumbent’s party brand (numbers closer to 100 on the horizontal axis), campaign spending remained fairly low, but in districts that disfavor the party brand (closer to 0 on the horizontal axis) campaign spending had practically skyrocketed.

Now, as in all studies based on historical data (rather than a controlled experiment), it is impossible to completely exclude the possibility that this trend is driven by a different set of factors. However, we developed a mathematical model to show that there are additional hypotheses that follow from our argument about party brands and campaign spending. We then tested these additional hypotheses with a statistical model that controls for a number of potentially confounding factors. For example, our theory also predicts the apparent non-linearity in the graph above, whereby spending goes up even more dramatically in districts that really disfavor a party’s brand. The fact that this and other hypotheses pan out gives us some additional confidence that our theory provides a useful model for describing how polarization shapes incumbent spending in different localities.

Our ﬁndings should change how we think about the role of party brands. Party brands are often treated as public goods that aid the electoral prospects of party members. In contrast, we show that party brands are simply externalities that help members in relatively safe districts, but harm the electoral prospects of incumbents in more marginal districts. Both the positive and negative effects of the party’s brand become more intense as party brands become more precise. Not only do campaigns become more expensive for incumbents in marginal districts, but it also becomes more expensive for these incumbents to vote with their party. Both of these ﬁndings should encourage new research on how (and whether) parties can compensate marginal incumbents for the increasing cost of party polarization.

This article is based on the American Political Science Review paper “Money, Reputation, and Incumbency in U.S. House Elections, or Why Marginals Have Become More Expensive”, which is open-access until April, 2014.

Brad L. LeVeck – University of California San Diego
Brad L. LeVeck is a postdoctoral researcher at the laboratory on International Law and Regulation at the University of California San Diego. His research uses experiments and mathematical models to study cooperation under uncertainty across a number of substantive domains, including American politics and international relations.