The current government shutdown has been marked by the near complete failure of Republicans and Democrats to communicate and negotiate towards a solution. Rosalyn Cooperman looks at the reasons behind this lack of communication, arguing that because the majority of Republicans and Democrats have relatively safe seats in the House of Representatives, they have little incentive to adopt a compromising stance due to the threat of a primary challenger from within their own party at the next election. The two dozen Republicans who are in favor of a ‘clean’ Continuing Resolution on the budget, on the other hand, are mostly those who represent ‘swing’ districts, and therefore have no re-election incentive for taking an unyielding party line stance.

“What we’ve got here is failure to communicate.  Some men you just can’t reach.” Captain, Cool Hand Luke (1967)

Last weekend congressional Democrats and Republicans declared a temporary cease fire in their otherwise robust campaigns to out-demonize the other just long enough for the House to overwhelmingly pass a bill approving back pay for the more than 800,000 “non-essential” federal workers furloughed when the government shut down.  Why? Members of Congress interested in re-election are well aware that federal workers and retirees reside in every state and congressional district, often in large numbers, as shown in Figure 1, below.

Figure 1 – Ten States with the Largest Population of Federal Employees and Retirees, 2012

Having provided a measure of relief to workers with an opaque promise to eventually pay them whenever the federal government again opens for business, members of Congress and the White House picked up the mantle of trading blame over which party is most at fault for the current sorry state of affairs.  This current failure to communicate precedes a much more worrisome deadline of mid-October when congressional inaction on raising the debt ceiling may well trigger a federal government default on its loans.  To be sure, the desire for parties to have safe congressional districts is a significant problem that Congress created for itself but also one that voters in the districts reinforce with their aggregate preferences.

Since 1998, the Cook Political Report has tracked House district partisanship through its Partisan Voter Index (PVI) which measures the presidential vote by congressional district.  Cook notes that the truly party competitive districts that range from a +5 Republican advantage to a +5 Democratic advantage have steadily decreased, with 164 swing districts in 1998 and only 90 such districts in 2013.  And, Cook adds, during that same period the median Republican seat moved rightward as did the median Democratic seat. In other words, most House members currently represent safe Republican or Democratic districts with constituents who expect them to double down on a message of no-compromise lest they, particularly Republicans, desire a primary opponent from their right in the next election cycle.  In the remaining few dozen districts, most of the seats presently held by Republicans, seats are party competitive and invite more robust challenges from the opposing party.

So in a Congress disinclined to compromise, how do the parties find common ground?   The existence of a bi-partisan plan in the House for a “clean CR”, a continuing resolution to fund discretionary programs in the federal budget without (de)funding the Affordable Care Act (aka “Obamacare”), is receiving attention as a path for reconciliation between the two otherwise intractable sides.  The clean CR is hardly a grand bargain; it is a temporary measure that keeps the government open for another six months at reduced, sequester-level funding and includes a repeal of the medical devices tax included in the Affordable Care Act.  The clean CR lays bare the gulf between the parties, and an identification of which House members support the measure affirms the Cook Report’s Partisan Voter Index (PVI) in action.

Of the 24 Republican representatives on record as supporting the clean CR, 16 come from those few remaining swing districts.  These House members, all men save for Shelley Moore-Capito (WV-2) who is also running in the 2014 midterm for her state’s open U.S. Senate seat, hold seats in districts with a slight, but not absolute, partisan advantage.  The competitive nature of these swing districts provides no re-election incentive for an unyielding party line stance.  The electoral challenge in these districts comes from across party lines, not within.  In contrast, members in party safe districts who dare compromise should expect electoral challenges as is the case with one clean CR supporter, Mike Simpson (ID-2), who already has a primary challenger endorsed by the Club for Growth, an interest group that funds primary challenges against Republicans they deem to be insufficiently conservative.

Note:  Numbers for representatives as of 10/7/13. A “clean CR” refers to a temporary continuing resolution appropriations bill that would not link funding discretionary spending to funding of the Affordable Care Act (aka Obamacare). Partisan Vote Index (PVI), compiled by the Cook Political Report, refers to the presidential vote by congressional district.  Congressional districts with a PVI between +5 Democratic advantage to +5 Republican advantage are identified as party competitive, swing districts.

Incentives for compromise are further enhanced in these swing districts because 19 of the 24 Republican representatives represent districts in states with the largest number of federal employees and retirees whose economies rely on an open, functional federal government.  Similarly, states with large numbers of federal workers have large numbers of government contractors whose work is in the satellite of the federal government but whose waylaid paychecks are not protected by a congressional promise to restore their pay.  Whether congressional Democrats will embrace the clean CR because they believe it is the least-worst offer they will receive from Republicans or whether House leadership will allow a formal vote on the measure is unclear.   What is clear, however, is that members of Congress with no electoral incentives to compromise all but insure a failure to communicate in negotiations to bring a resolution to the government shutdown and, likely, the looming debt ceiling crisis.

Rosalyn Cooperman – University of Mary Washington
Rosalyn Cooperman is an Associate Professor in the Department of Political Science at the University of Mary Washington in Fredericksburg, VA.  Professor Cooperman’s research interests include American political parties, Congress, and organized interests.  Cooperman served as a Principal Investigator for the 2004 and 2012 Convention Delegate Studies, a survey of Democratic and Republican party elites.  Professor Cooperman’s current book project examines the role of women’s PACs in the recruitment and funding of women congressional candidates. 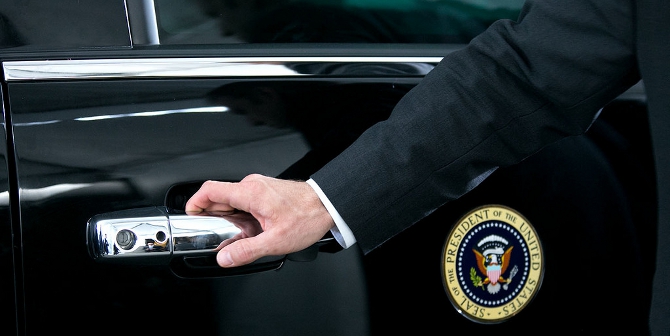 The Hastert rule is severely limiting Speaker John Boehner’s ability to negotiate a compromise over the shutdown.