Robert Skidelsky is Emeritus Professor of Political Economy at the UK’s University of Warwick and the biographer of John Maynard Keynes. His new book, co-authored with his son Edward Skidelsky and entitled How Much is Enough?: Money and the Good Life, brought him to the LSE for a public lecture. In this interview, he discusses economic insatiability and ‘the good life’ with Joel Suss, editor of our sister blog, British Politics and Policy at LSE.

In your new book you argue that capitalism has inflamed our innate tendency to insatiability. Can you elaborate on this?

You could say capitalism is a means to an end, the end being lifting humanity out of poverty in order to enable it to lead the good life. That’s the essential point. The idea that we grow forever and ever seems to me a form of insanity because economic growth is, after all, only a means to wellbeing. The difficult question is: Can we say that at any point we reached a state of wellbeing which enables us to let off further growth?

I think people nowadays, especially politicians, use a metaphor of a race. ‘We must keep in the race’, they say. But of course races come to an end. You don’t go on racing forever and ever. Just think of a marathon that goes on and on. I think that’s inappropriate; a race comes to an end when we’ve got enough. How much is enough? 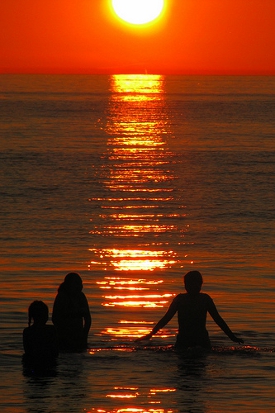 Can we live the ‘good life’? Credit: wsilver (Creative Commons BY)

Your book tries to persuade the reader that an objective conception of the ‘good life’ does exist and can be known.

The book is both an attack on the way we think about individuals as detached from their circumstances and from society and a positive message, which is that if we start thinking about humans in a society we find that at most times and places there has been a much wider measure of agreement than we’re accustomed to believe in what a good life is – in the basic goods; what it means to live wisely, reasonably and well, as Keynes put it in that little essay ‘Economic Possibilities for our Grandchildren’.

You say ‘Post Rawlsian liberalism and neoclassical economics both forbid any public preference for this or that way of life’ (p. 93).

They forbid it in political theory. But in fact, it’s shaped for us by very powerful forces, forces of power, which classical economics ignores. Both Rawls and neoclassical economics share a kind of methodological individualism; they postulate voluntary decisions reached by individuals detached from any of the context in which individuals decide things. Rawls has his ‘veil of ignorance’ where all kinds of things that in real life actually influence the way people decide their choices are removed by assumption. The same is true in neoclassical economics. They both come out of a particular American tradition where methodological individualism is the only form of analysis. These two powerful disciplines are united on that single premise.

Despite our societies growing as rich as Keynes expected when he penned ‘economic possibilities of our grandchildren’ in 1930, our working hours have not fallen as he predicted. Why is this?

We examine lots of possible reasons for this. Two of them are essentially spurious and the other three are worth attention. The first spurious one is that we work so hard because we love work in a quite crude sense. I don’t think that’s right. The evidence is that most people prefer to work shorter hours. Secondly, we work so hard because we’re terrified of leisure. Again because people actually prefer shorter hours the evidence is against that.

I think there is this element of insatiability, restlessness, what people call ‘getting bored with what we’ve got’. But against that is the thought that for thousands of years, the quantity of materials and services didn’t really increase, so where was all this insatiability and greed at that time? It was repressed by moral codes of one kind or another.

Finally, there is also a power system to consider. We don’t choose how long to work, we don’t choose between work and leisure in the way that neoclassical economics would say that we trade off these things. And the other thing that has happened more recently is that it has become very evident that without countervailing power of one kind or another, capitalism does produce huge inequality of wealth and income which keeps lots of people quite poor even though society as a whole gets richer. So the distributional effects of unrestrained capitalism are very inimical to taking more time off work. So I think that these are all explanations of why we got richer on average but haven’t given up work to anything like the extent Keynes thought we would.

You have said before (in an interview with the Institute of New Economic Thinking) that “the ideas that come dominate economics generally serve the interests of the power holders, and at the moment they are the financial power”. Has the financial crisis altered who the power holders are? Will the discipline of economics be transformed as a result?

To answer the second question first, there have been some revolts, led usually by students rather than their professors. For example, there’s the Post-Crash Economics Society at the University of Manchester. There are and have been these sort of rebellions against the kind of economics students are taught because of its detachment from any sort of ethics or sort of ideas of what it’s all for. I don’t think its shaken the economics profession, it’s very deeply entrenched despite things like INET, which were shaking attempts.

But then on the power side, I don’t think it’s shaking financial elite, their wings have only been clipped a bit. If you look at the mechanisms of recovery, which are allowed by orthodox opinion, they’re really monetary and you can sum them up under the rubric of Quantitative Easing. The point is you’re actually shoveling money into the pockets of people who already have assets, and you hope that the asset boom, house prices or other sorts of securities, is going to lift the economy out of the doldrums. It may to some extent do that, but it recreates the unbalanced economic structure that led to the crash in the first place.

The last chapter of the book discusses solutions to the problems raised in the previous chapters. You discuss providing a basic income, reducing the pressure to consume and reducing advertising. Can you elaborate on these?

I think you can just make advertising more expensive for the advertisers in one way or another. They already do that; for example, they do it for cigarettes, they do it for things that are regarded as ‘sin goods’. You could extend the notion of ‘sin goods’ to actually cover all goods consumed to excess. You can change the financing of advertising.

I think the great appeal of a basic income for us is that it gives people more of a choice between work and leisure. It is a particular kind of redistributive mechanism which excludes the government from the choice. Governments are generally in favour of redistribution, but they like to keep control over the process and most redistribution is tied to work, tied to the labour market and things like that. But here is something that is quite detached, it is the beginning of the process of detaching income from work.

We then go further and want a progressive consumption tax. We also want control over the hours of work for quite a large proportion of workers. Not everyone because I think people have to be allowed to exploit themselves. It’s their purposes if they start a business and it’s fine if you want to work 100 hours a week. But workers need some protection on hours of work.

These are all attempts to reproduce what used to be the case when trade unions were much stronger and when there was genuine political competition. Then there were counterbalancing forces. But they’ve all disappeared, so you’ve got to think of new mechanisms.

Robert Skidelsky – University of Warwick
Lord Robert Skidelsky is Emeritus Professor of Political Economy at the University of Warwick. His three volume biography of the economist John Maynard Keynes (1983, 1992, 2000) received numerous prizes, including the Lionel Gelber Prize for International Relations and the Council on Foreign Relations Prize for International Relations.