Confederate cotton creates modern issues, as the right to wear the Confederate flag is contested in contemporary U.S. schools

Although the Civil War was more than 150 years ago, some leftover tensions from 1865 still persist. Ruthann Robson argues that the courtroom is one such battlefield for these conflicts, examining cases regarding the rights of students to wear the Confederate flag to school.

Today, the War Between the States continues on symbolic battlefields including ones in which the cotton is blended into a t-shirt bearing the Confederate flag. The “rules of war” for these engagements is the First Amendment to the United States Constitution, adopted in 1791, which provides that Congress shall make no law “abridging the freedom of speech.” It was made applicable to the States by the Fourteenth Amendment, one of the Reconstruction Amendments (including the one abolishing slavery and involuntary servitude) that became part of the US Constitution after the Civil War. The Confederate flag, like most flags, is recognized as symbolic speech, and as such is protected. Constitutionally, the government cannot generally prohibit wearing or displaying the Confederate flag, but no constitutional rights are absolute. Although an adult wearing a Confederate symbol when walking down a public street has a great deal of constitutional protection, a child sitting in a classroom has much less. 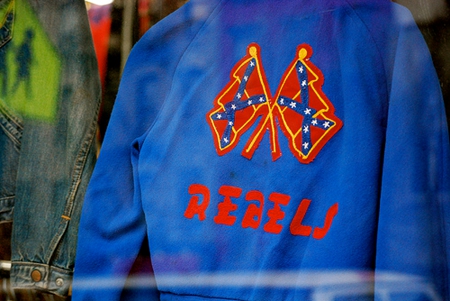 In 1969, the United States Supreme Court decided the watershed case of Tinker v. Des Moines Independent Community School District involving students wearing black armbands to protest United States involvement in the Viet Nam war. The Court declared that students did not “shed their constitutional rights to freedom of speech or expression at the schoolhouse gate.” The majority opinion, authored by the liberal Justice Fortas, opined that “state-operated schools may not be enclaves of totalitarianism,” and favored free speech, the marketplace of ideas, and, implicitly, democracy. The conservative Justice Black peppered his biting dissent with statements such as “students all over the land are already running loose” and “some of the country’s greatest problems are crimes committed by the youth, too many of school age,” ultimately objecting to a “new revolutionary era of permissiveness in this country fostered by the judiciary.”

Tinker remains best known for the standard it articulated, still vibrant more than forty years after the decision. This guideline requires government school officials to demonstrate that the disallowed student expression would be a substantial disruption or material interference with appropriate school discipline. The Court did not invent this “substantial disruption” test from whole cloth, but tailored it from lower court decisions on the suspension of African-American students for wearing voting rights buttons with the acronym SNCC (Student Nonviolent Coordinating Committee) at Mississippi schools during a period of intense civil rights unrest and violence earlier in the 1960s.

Perhaps ironically, one of the most common and contentious types of student attire in post-Tinker cases involves clothes featuring the Confederate flag, usually a t-shirt, but including belt buckles and purses, in which conservative students raise a First Amendment claim. The legal doctrine in the Confederate flag cases centers on the substantial disruption standard, but also encompasses two other matters briefly raised in the Tinker opinion. First, the Court in Tinker noted that the black armbands did not implicate the “rights of other students to be secure and to be let alone,” thus suggesting this should be a factor. Second, the Court in Tinker found it “relevant” that the school did not prohibit the wearing of all symbols of political or controversial significance, and had allowed the wearing of “buttons relating to national political campaigns,” and even “the Iron Cross, traditionally a symbol of Nazism,” thus raising the specter of viewpoint discrimination.

All of the United States Circuit Courts of Appeals that have considered the issue have upheld the authority of government school officials to prevent the wearing of Confederate flag attire despite First Amendment claims by students. The United States Supreme Court has repeatedly refused to hear the issue, most recently denying a petition on October 7, 2013 in Hardwick v. Heyward.  The cases have generally arisen in schools in states that were claimed as part of the Confederacy: South Carolina, Florida, Texas, Tennessee, Kentucky, and Missouri. But even when they arise elsewhere, such as in New Jersey or Kansas, courts have been sensitive to the contested meanings of the Confederate flag. For while many people associate the Confederacy with a war to preserve slavery and a rejection of racial equality, others—including some of the students who wear the Confederate flag on their apparel—argue that the Confederate flag has become a “venerated symbol of my ancestry, a symbol of my Christian religious faith, and a symbol of the South, a symbol of American history and a political symbol, to me, of limited government and resistance to unconstitutional authority.”

Yet the courts’ recognition of the conflicting symbolism has served as a justification for upholding government officials’ choice to ban the symbol in school. As a judge ruling upon a Florida case reasoned, given the “strong feelings” involved, it is “not only constitutionally allowable for school officials to closely contour the range of expression children are permitted regarding such volatile issues, it is their duty to do so.” Thus, there need not be a close link between past incidents of racial violence and the Confederate flag, it is sufficient that school officials reasonably forecast the possibility of disruption and take steps to prevent it, including prohibition of the Confederate flag on clothing.

Ruthann Robson will be speaking about her new book, Dressing Constitutionally: Hierarchy, Sexuality, and Democracy – From Our Hairstyles to Our Shoes at City University of London on 26 November 2013. Click here for more details.