Congress has a very limited ability to hold central bankers to account.

Congress has a very limited ability to hold central bankers to account.

The financial crisis has brought new prominence to the role of central banks and bankers on both sides of the Atlantic. But who holds these powerful figures to account? In the U.S., Congress has this responsibility, but new research by Cheryl Schonhardt-Bailey finds that it has been largely unable to significantly challenge the Fed since the 1970s. She argues that congressional oversight is constrained by members’ electoral incentives, a lack of expertise in monetary policy, the extreme transparency of hearings, and the sheer size of the House and Senate banking committees.

One of the legacies of the recent financial crisis is an institutional one—that is, central banks have acquired more responsibilities and even greater prominence in governing national economies. But these central bankers are, after all, unelected officials with no constituency to which they are held accountable at the ballot box. If we, as voters, do not approve of how our country’s monetary policy is conducted, we can punish our elected representatives (who we trust to hold central banks to account) but we have no direct influence on central bankers. Voters are thus one step removed from exerting direct influence on monetary policy.

This arrangement enables independent central bankers to take a view toward the longer term, at arm’s length from the short-term horizons of politicians and voters. We accept the independence of central banks, assured that this obliges them to explain their policies in formal settings—like banking committees in Congress. In turn, we expect members of Congress (or Parliament in the UK) who serve on these banking committees to challenge central bankers effectively.  But how effective are our elected officials at conducting effective oversight of monetary policy? 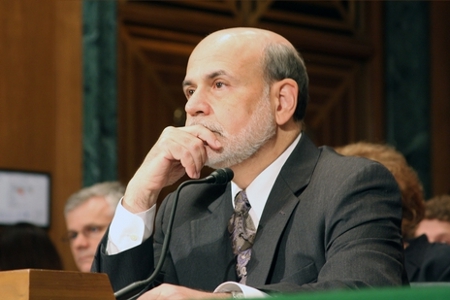 Chairman of the Federal Reserve, Ben Bernanke gives evidence to the US Senate Commitee on Banking, Housing & Urban Affairs

In recent research, I explore this by examining how policy makers and politicians think and talk about monetary policy in the formal settings of the policy meetings of the Federal Open Market Committee (FOMC) and the oversight hearings of the two congressional banking committees. I find that unelected central bankers deliberate on monetary policy in one way, and politicians do so in another. Decade after decade, Fed chairman after Fed chairman, one feature is evident: Fed chairmen tend to talk about the technicalities of monetary policy while senators and representatives talk about other things, such as jobs, fiscal policy, energy policy, education, and so on.  All too often they simply talk past one another. Why?

My textual analysis of the transcripts of the monetary policy oversight hearings in the two congressional banking committees, together with in-depth interviews, points to an institutional rather than an ideological rationale. This may surprise observers familiar with the partisan conflicts in Washington, which led to the recent government shutdown and the tussle over raising the debt ceiling, who would attribute any dysfunction in this area to polarization between Democrats and Republicans.

In conducting oversight, Congress is constrained by specific institutional features. First, the electoral incentives of members divert members’ time and energy away from deliberating on monetary policy.  Unlike other areas of policy where the distributional consequences for constituents are conspicuous and acute, it is difficult for members of Congress to claim credit for delivering (or helping to deliver) low inflation. As former Fed Governor Lawrence Lindsey asked, “Where are the votes? Where do you get the votes back home by taking on monetary policy?” And William Poole (former President of the St. Louis Federal Reserve Bank) comments, “The purpose of the hearings first and foremost, 98%, is for individual members of Congress to spout off and to be visible, to make the evening news, and that’s why those hearings are mostly about stuff other than monetary policy.”

Second, the lack of technical expertise in monetary policy limits the ability of most committee members to hold the Fed to account on its details.  In the words of former Fed Vice-Chair Alice Rivlin, “Most of them don’t have a very keen grasp of monetary policy. They think it is something sort of mysterious and they don’t want to sound stupid so they don’t take it on”, and Poole notes that members do not engage the Fed chairman on monetary policy, “because they do not want to risk asking a question that will prove to be deeply embarrassing, revealing that they don’t know anything of what they are talking about.” Members of Congress characterize their limited expertise and its effect somewhat differently. According to former Congressman Gresham Barratt “you just don’t have the brain power or the time”, and former Senator Evan Bayh remarks that, “you get stretched very thin because the issues you have to deal with are many and are complex, and you don’t have enough time or enough staff support to get into great detail in all of them. It is just not humanly possible.”

Third, the extreme transparency (sometimes described as a “media circus”) of the monetary policy oversight hearings creates an incentive for committee members to “grandstand”, rather than engage the Fed chairman in substantive deliberation. Speaking to one’s constituents via the television cameras may be a way to reflect the concerns of the public, but it creates something of a “revolving door” effect. Gresham Barratt aptly describes the process as: “Getting the attention of the chairman, asking your little question, and then you are gone; because you are playing to the cameras, you want to make sure constituents back home [say] ‘There is Gresham, I saw you.’”

Finally, the membership size of the House and Senate banking committees inhibits deliberation, particularly in the House Financial Services Committee, with over 70 members. Observers note that because there is not enough time for all committee members to ask questions, many decide not to attend at all and instead merely read the transcript after the hearing. Indeed the committee itself is sometimes perceived as serving as a “cash cow”, with individuals seeking membership in order to enhance their campaign funding.

To illustrate these, Figure 1 below lists the ten thematic classes identified by the textual analysis in both the House and Senate banking committee hearings on monetary policy over a period from 1976 to 2008 (covering five different Fed chairmen). The symbols signify where Democrats, Republicans, Independents and the Fed Chairman are statistically significant in their focus on a particular theme, and the first four of these represent the “guts” of monetary policy discourse (inflation, output, labour markets and money growth/credit). With the exception of discussing jobs (mainly by Democrats), members of Congress do not engage with the Fed chairman on monetary policy. 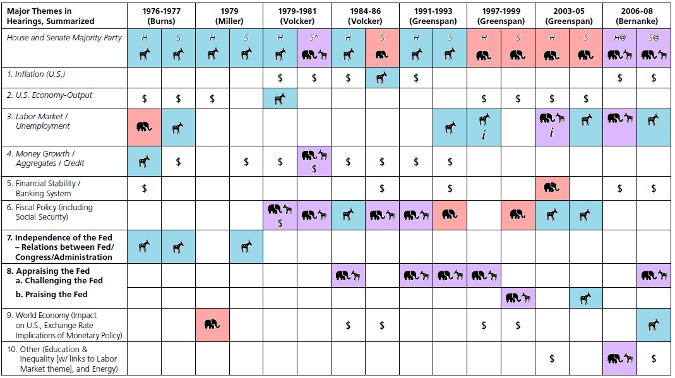 Does this lack of engagement matter? I argue that it certainly does, because effective congressional oversight should be an important contributor to maintaining the reputation and independence of the central bank. Without effective oversight, accountability becomes questionable, and the gap between we as citizen-voters and our governing institutions becomes wider. 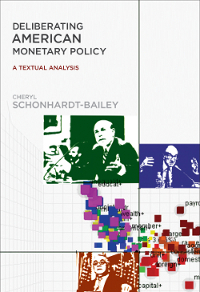 Cheryl Schonhardt-Bailey – LSE Government Department
Cheryl Schonhardt-Bailey is a Reader in Political Science at the LSE and has published several articles and books on 19th century British trade policy. She has employed textual analysis software to examine legislative debates on abortion, and the rhetoric of US presidents (from Woodrow Wilson to Barack Obama). Her most recent book is Deliberating American Monetary Policy: A Textual Analysis (MIT Press, 2013) which provides a systematic examination of deliberation on monetary policy from 1976 to 2008.