Last Friday, Special Counsel Robert Mueller delivered his final report to the US Attorney General, William Barr, who then sent a short summary of the report to Congress. LSE US Centre Director, Peter Trubowitz writes that while Trump has avoided the worst – charges of collusion between his 2016 election campaign and Russia were found to be without merit – the report has left questions about potential obstruction of justice by Trump unanswered.

Trump has clearly avoided the worst — charges that his presidential campaign was conspiring with the Russians.  But it is not the clear vindication that the President and his legal team were hoping for. It is not, as the President tweeted yesterday, “complete and total exoneration.” By not cleanly resolving the question of whether Trump obstructed justice in Trump’s favor, Mueller has left a big question mark hanging over the president’s head.

So you don’t think Mueller’s Report will put an end to the controversy?

No. I think there will be a groundswell of calls for the public release of Mueller’s full report or minimally, giving the report to Congress. Mueller’s striking decision to leave the question of whether Trump obstructed justice unanswered all but guarantees this — it is as if he is saying Congress will need to make that judgment. Democrats will assume that the Attorney General Barr in claiming that the President did not commit obstruction has put the best face on Mueller’s findings about obstruction of justice and will want to see why Mueller was torn on the question. 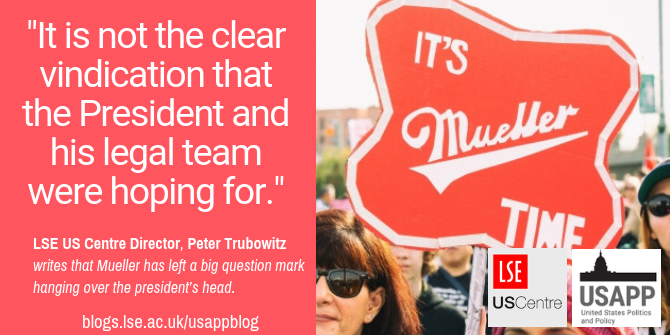 How will this impact impeachment talk on Capitol Hill?

It’s hard to say, but I don’t think it will change Speaker Nancy Pelosi’s judgment that impeachment should be avoided in the absence of a “smoking gun” charge. I also don’t think that the report is likely to have much effect on voters’ judgments about Trump and whether he should be re-elected.  As of late January, 57 percent of voters said they would “definitely not” support Trump in 2020.  That’s not going to change much because of Mueller’s report.