Where urban planning is concerned, the conventional wisdom is that more compact cities are greener. While this may be the case for greenhouse gas emissions, new research on US cities from Sefi Roth and Felipe Carozzi find that denser cities are also more likely to have greater concentrations of harmful air pollution which can be detrimental to human health and well-being.

Air pollution is bad for us. We all know that polluted air is detrimental to our health and recent research shows that it can also affect our performance in education, productivity at work and even our safety. This has important implications for our cities. Why? Because air pollution is primarily an urban problem. It is in large cities and their urban cores where we typically experience the worst air quality. As a result, the economist’s textbook description of urbanization lists air pollution as one of the forces that prevents cities from growing, with bigger cities associated with higher levels of air pollution. Since it is an urban problem, air pollution exposure can be shaped by urban planning and policy. In particular, it can be affected by population density, the defining feature of urbanization that distinguishes cities from smaller towns and villages.

According to our estimates, doubling density – say, increasing the density in Houston to match that of Chicago – increases PM2.5 concentrations by 0.73 μg/m3, which is roughly 10 percent of the average pollution across cities. Using well established functions that map pollution concentration to mortality rates, in conjunction with official mortality costs estimates from the US Environmental Protection Agency, we find that doubling densities would lead to annual mortality costs (the lost income which could be attributed to disease or a shortened lifespan) of as much as $630 per person. Figure 1 shows the relationship between population density and pollution:

So denser cities lead to higher pollutant concentration. Is this really that surprising? Well, if one reads the recent literature on green cities, it definitely is. A prolific strand of research has emphasized the environmental advantages of denser cities. In dense cities, households enjoy shorter commutes when driving to work, and may even switch to other transport modes when these are available. In a world in which a significant amount of emissions are generated by transport – especially driving – this observation has led to the conclusion that denser cities are also greener. But our results indicate that this picture is not as straight forward as it might seem. Yes, denser cities may be associated with lower emissions which is important for reducing global greenhouse gas concentrations.

Photo by Zhu Liang on Unsplash 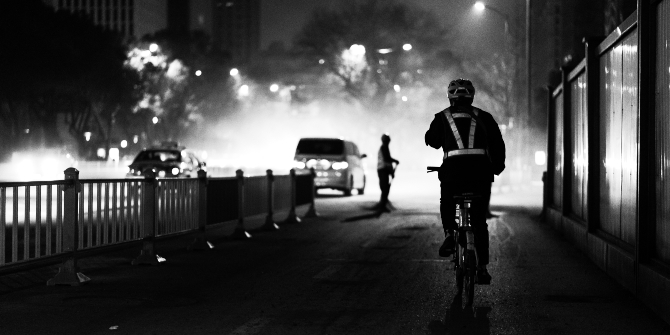