Donald Trump has cited the example of one of his US presidential predecessors, Ronald Reagan, in support of his protectionist policies. But as research by Ufuk Akcigit, Sina Ates and Giammario Impullitti shows, it was the Reagan administration’s innovation policy – not a retreat from globalisation – that promoted long-run growth in the US economy.

In March 2018, President Trump imposed tariffs on Chinese steel and aluminium, invoking concerns about unfair competition and national security. These protectionist measures were later extended to many other countries and goods. Starting with China, US trade partners promptly retaliated, giving rise to the biggest trade conflict of the post-war period.

During his 2016 election campaign, Trump declared that he would implement a protectionist economic policy, following the example of Ronald Reagan. It is certainly true that in President Reagan’s first term, he passed some protectionist measures in the face of a severe recession, a significant appreciation of the dollar and increasing foreign competition from Japanese and European firms. These included an emblematic 49 percent duty on Japanese motorcycles, which was particularly popular with the US manufacturer Harley-Davidson.

But at the same time, Reagan implemented policies to open borders, including the start of negotiations that led to the North American Free Trade Agreement in the early 1990s. By his second term, Reagan’s trade policy agenda had shifted drastically away from protectionism: from closing US markets to opening foreign markets, focusing on resolving unfair trade disputes and reviving bilateral and multilateral negotiations.

In addition, a different set of industrial policies, introduced in the early 1980s and aimed at improving US competitiveness in a more challenging global economy, lasted for the full length of Reagan’s administration and beyond.

These measures included tax incentives for research and development (R&D), strengthening the protection of intellectual property rights, promoting the transfer of military technologies to commercial applications, and procurement contracts by agencies from NASA to the Department of Defense, aimed at creating markets of an appropriate size to encourage firms to make risky investments in innovation.

Our research finds that abandoning protectionism for innovation policy was Reagan’s winning response to international competition. We focus on the Research and Experimentation Tax Credit, an incentive for innovation that was introduced in 1981, subsequently renewed several times and made permanent in 2015. We build a new model of the global economy to assess the effects of R&D subsidies and compare them with the effects of raising trade barriers as a response to growing foreign competition.

Figure 1 shows the erosion of US technological leadership, measured by the share of patents obtained by US companies in the US Patent Office (USPTO). In the mid-1970s, around 70 percent of patents in the United States were owned by US firms; a decade later, this share had dropped to a little over 50 percent. This change is a result of the acceleration of innovative activity by Japanese and European companies. 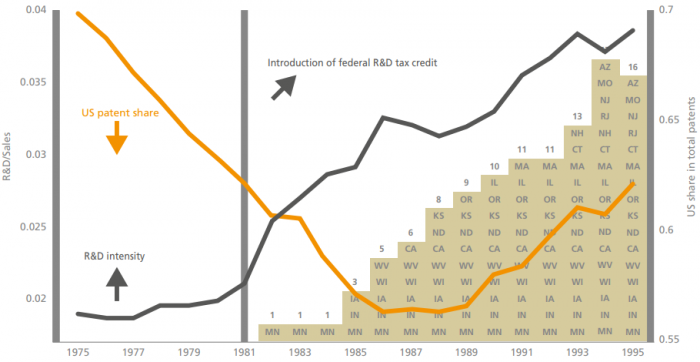 Notes: The figure shows the evolution of aggregate R&D intensity (defined as the ratio of total R&D spending to total sales) of public US firms listed in the Compustat database, and the share of patents registered by US residents in total patents registered in the USPTO database from 1975 to 1995. The ratios are calculated annually. The bars show the total number of US states providing R&D tax credits, along with their names, for every year since the first adoption of such a measure in 1982.

We also saw a similar technological convergence in the global distribution of R&D investments and in market shares in medium to high-tech industries. But this trend seems to reverse in the mid-1980s, shortly after the introduction of the R&D tax credit and the other US innovation policies. The share of US patents starts increasing again and there is a simultaneous acceleration of the average R&D share of total sales in US firms. Figure 1 also shows that starting with Minnesota in 1982, an increasing number of US states adopted a state-level tax credit for R&D expenses.

Our model reproduces the evolution of global leadership in patenting shown in Figure 1, with US firms having the majority of patents in the early 1970s and foreign firms catching up in the next decade. Hence, our policy evaluation exercise is set up in a world where the US economy faces increasing foreign technological competition due to an acceleration of innovation in its main trade partners.

In this global scenario, we find that the R&D subsidy introduced in 1981 promoted income growth in the United States in the short run and even more so in the long run. By reducing the cost of innovation, R&D subsidies stimulate firms’ investment in innovation, allowing them to regain their technological leadership and bring back profits, wages and jobs to the United States. The 19 percent reduction in the cost of innovation brought about by the tax credit generates a 1 percent annual increase in US per capita consumption between during the period 1981-2016. 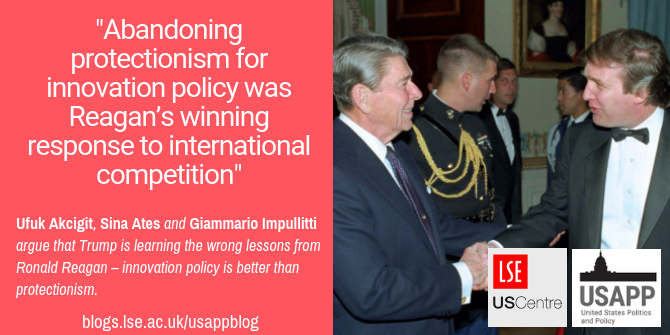 What would have happened if instead of increasing innovation subsidies, Reagan had followed the protectionist approach of his early period in office? We study an alternative scenario in which the United States put a 50 percent tariff rise on all imports.

According to our analysis, this policy would have generated benefits in the short term (10-15 years) because it would have protected US companies in import-competing sectors from foreign competition by helping them maintain their shares of the domestic market. But shielded from foreign competition, US companies would have reduced their investment in innovation, resulting in a slower path of productivity growth and leading to income losses for the US economy in the long run.

Furthermore, in this scenario, short-term benefits are obtained only under the assumption that commercial partners do not respond to duties. In the plausible retaliation scenario in which the trade partners introduce equally protective measures, the short-term benefits also disappear, as foreign tariffs damage US exporters, reducing their quotas in export markets and decreasing their incentives to innovate.

We then turn to analyse optimal policies. We look for the levels of subsidies and tariff barriers that maximise the economic wellbeing of the country. Our simulations indicate that the optimal subsidy to innovation is inversely proportional to global trade openness.

Low multilateral trade barriers generate more competition for US firms in the domestic market and also make it cheaper for them to access foreign markets. Both the competition and market access margin push US companies to innovate, making public interventions in support of innovation less necessary.

In modern economies, future ideas leading to new products and production processes build on the stock of existing ideas. In producing and selling an idea (innovation/patent), companies cannot take account of whether and to what extent their idea will benefit future innovators. This difficulty of pricing future uses and applications of ideas reduces the incentives to innovate for private firms, thereby providing a motive for government to subsidise innovation.

Hence, in modern economies, where ideas are the key drivers of new technologies (which in turn are the key source of economic growth), markets fail to generate the optimal amount of innovation. Our results suggest that this failure is less severe as economies become more open, as competition and access to export markets provide stronger incentives for private firms to innovate.

In preparation for Brexit, the UK government has developed a new industrial strategy ‘aimed at boosting productivity growth… with investment in skills, industries and infrastructure… encouraging the UK to be world’s most innovative economy’. Our results provide an economic rationale for the decision to complement the increased trade barriers that Brexit will bring with industrial policy to stimulate productivity growth.

But there is one big caveat: replacing market openness with tax cuts and other subsidies has important implications for the public finances. Trade openness has a small impact on the government’s budget, as modern trade barriers are mostly nontariff, while tax cuts and subsidies can be very costly and therefore less affordable for many advanced economies characterised by large public debt burden.

When analysing the optimal joint R&D and trade policy, we find that zero trade barriers and moderate R&D subsidies are the best policy option in both the short and long run.

In a 1988 interview with the New York Times, Harley-Davidson’s chief executive Vaughn Beals declared: ‘For years we have been trying to understand why the Japanese were beating us so badly. Before we thought it was their culture. Then we thought it was automation… then dumping. Finally, we understood that we were the problem, not them!’

It turned out that the quality of US motorcycles was much lower than that of Harley –Davidson’s Japanese counterparts. Once the company started improving its products, process and marketing, its market share bounced back.

Giammario Impullitti – University of Nottingham
Giammario Impullitti of the University of Nottingham is a research associate in CEP’s trade programme. His research focuses on two major lines: the first studies the effects of globalization on growth and on labor market outcomes, such as unemployment and income inequality. The second examines the role of innovation policy in promoting growth and development.