Last month, nearly 3,000 in-flight catering workers employed by United Airlines at six major US airports won union recognition after an election which was opposed tooth and nail by their employers. Lauren Burke writes that the workers were able to overcome a combination of heavy anti-union opposition from United and labor laws which largely favor employers by recruiting large numbers of employees into organizing roles and winning the support of local immigrant communities.

On October 23rd, 2018, 2,700 United Airlines in-flight catering workers who prepare, pack, and deliver food to planes across the United States won recognition for their union, UNITE HERE, in a government supervised election.  Workers at six major airports – Denver, Houston, Newark, San Francisco, Honolulu and Cleveland – voted 72 percent in favor of electing the union to represent them.  To win such an astounding victory in a country where the union density has declined to 10.7 percent meant surmounting the considerable obstacles to union victories created by US labor law.  UNITE HERE’s success shows that when the resolve of workers to improve their jobs and lives is supported by good organizing strategy, it is still possible to win.

For Sylvister Ralpho, who has worked in United’s Denver catering kitchen for eight years, the election victory represents huge step forward for him and his community: “For me it’s about workers’ rights. I want to be a part of this and help my friends and family. A lot of people want equality at United.”  Like many of his kitchen co-workers, Sylvister immigrated from the Marshall Islands.  The Denver hub employs a particularly large number of Pacific Islanders, who are drawn to this work for the flight benefits that help them stay connected to their home.

In many industries the US, for a worker to be a member of a union and have the right to collectively bargain over their wages, benefits, and working conditions, they must first be employed at a workplace where the workers are represented by a union. If there is no union in a workplace, workers have to elect the union to gain the right to collectively bargain. However, there is not a single body of law that covers all workers. For most private sector workers, the organizing rights and the process of joining a union is governed by the 1935 National Labor Relations Act (NLRA).  Some workers have no legal protections for their right to organize a union. These include supervisors and foremen, agricultural workers, and domestic workers.  Public sector workers are governed by a patchwork of state and local laws. The union rights of United’s in-flight catering workers are covered by the 1926 Railway Labor Act which is administered by the National Mediation Board (NMB). 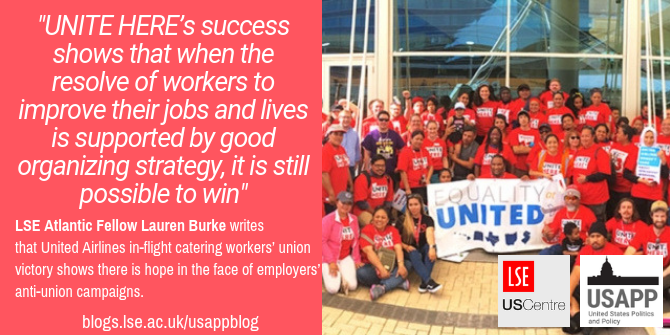 United’s in-flight catering workers formally filed for their election in January of 2018, when 76 percent of the bargaining unit signed cards indicating that they wanted union representation.  Under US labor laws, the bargaining unit defines the group of workers who are eligible to be represented by the union.  The initial challenge that the organizing drive faced was the extraordinarily broad bargaining unit defined by the NMB.  To win, UNITE HERE had to sign up a majority of all the workers in all the kitchens across the country.  This means that even if 100 percent of the 550 workers at the Denver United kitchen voted for union representation, they would not win union representation if there wasn’t majority support from other kitchens thousands of miles away.

Another challenge was that under the NMB workers need to show 50 percent support to even request an election.  In practice, given how much power employers have to intimidate and threaten workers in course of a representation election, no union that really wants to win ever submits the minimum number of cards.  In this case, 76 percent support from all the kitchens far exceeded the minimum required by the NMB.

United Airlines strikes back against the union

Retaliation from the boss came quickly.  In March of 2018, United Airlines filed a complaint alleging that the signatures were obtained through fraudulent means, claiming that organizers from UNITE HERE misrepresented themselves as United Airlines employees.  United’s complaint further alleged that immigrant workers may not have understood what they had signed because of their facility with English.  Normally, the National Mediation Board (NMB) would postpone any investigations until after the election.  However, in this case, the NMB made the unprecedented decision to delay the election until a full investigation of the charges could be conducted.

The delay challenged the workers’ resolve.  Sylvister describes how the investigation impacted him and his coworkers: “The investigation was a long process — many people began to lose hope.  Me and the other leaders took the lead to feel strong.  In the middle people were worried, we were telling them to hang in there and wait for the board to come to our city.  We had to wait and go through the process.”

United Airlines took advantage of this delay to intensify their anti-union campaign.  Under US labor law employers have fairly extensive rights to influence employees in their decision to choose union representation. Furthermore, when employers engage in illegal union-busting activity, legal sanctions against the employers are limited in scope and often employed long after the employer had successfully defeated the organizing drive.  With the election indefinitely postponed, United had a free hand to crush the fledging union.

In May, UNITE HERE filed a complaint with the NMB supported by 58 sworn declarations detailing the extent of the anti-union campaign being waged by United Airlines.  On the day that UNITE HERE filed for the election, United suspended three prominent union leaders in the Newark kitchen.  The complaint also details multiple instances of surveillance of union activity as well interrogation of workers’ opinions of the union. If the workers voted for the union, United threatened them with job termination, and cancellation of the flight benefits that were especially valuable to Pacific Islanders like Silvister.

Finally, in August of 2018, the NMB ruled that there was no basis for United’s claims and scheduled the election for the following month.  The board’s investigation revealed that workers indicated that they did know what they were signing and who they were signing it with.  Further, United itself had taken steps to differentiate itself from the union, when it notified employees that the union may be coming to people’s houses and that they were in no way connected with the company.

By contrast, the NMB did not investigate the union’s claims, reverting to its earlier practice of investigating claims after an election is held.

Despite months of delay in the face of an aggressive anti-union campaign, the percentage of workers supporting the union remained steady.  The ruling from the NMB gives an interesting insight into how UNITE HERE maintained that level of support. Organizers from the union had recruited approximately 10 percent of the workforce to the union organizing committee, which represented the many different groups of workers in the kitchen and could communicate with workers in their own languages.   This committee structure not only kept workers engaged in the campaign, it literally allowed their voices to be heard by the organizers.

Another factor for the success of the organizing drive was the support of local immigrant communities.  Silvister’s Marshallese community church got involved in the campaign, because United is a major employer for the small community. The flight benefits provide a crucial link for the entire community to friends and family in the Marshall Islands, which struggle with extremely high rates of unemployment and are profoundly threatened by climate change and sea level rise.

The next step for the workers is to negotiate their first contract.  Silvister is hopeful about the process: “The thing we’re most excited about is having a voice at work and having our rights.” But, once again, the workers’ ability to put pressure on the airline is restricted by labor law.  Under the NMB, for workers to strike legally they must be permitted to do so by the President of the United States.  Given the current resident of White House, that seems highly unlikely, though tough committee at United will likely find creative ways to fight for a fair contract.

Lauren Burke – LSE Atlantic Fellows Programme
Lauren Burke is an Atlantic Fellow for Social and Economic Equity at the LSE’s International Inequalities Institute. She works with the Labor Network for Sustainability. Previously, she was a worker organizer with UNITE HERE! for over a decade.