In many cases the COVID-19 pandemic has accentuated existing inequalities and threats experienced by those in low income communities. Reporting from New York City, Glyn Robbins looks at the city’s politics of homelessness and eviction in light of the pandemic. He writes that despite local measures like the city’s extended eviction ban, leadership on housing policy ultimately needs to come from Washington DC.

As I write this, temperatures in the city are hitting three figures (on the Fahrenheit scale). There has been a “weather advisory” in place and New Yorkers are being warned to stay cool and if possible, indoors with air-conditioning, suggestions that must ring hollow to the city’s (at least) 60,000 people who don’t have a home. But like many countries, including mine, there’s more likely to be a panic about the weather, than housing.

I arrived here several weeks ago as a Fulbright Scholar attached to the City University of New York’s Graduate Centre. It’s a city and country I’ve visited many times since I first came 35 years ago and – again, as in the UK – have witnessed a steadily deteriorating housing situation. But now is different. We really have no metrics for what could happen next, both with housing and US politics and society more generally.

There’s a strange atmosphere here. At one level, the trappings of normality abound. In the Allerton area of the Bronx, where I’m living, there’s a lively, predominantly Hispanic, street-life, with only facemasks and the City’s vaccination bus to tell you something unusual has happened in the last 16 months. But a few New York conversations are enough to tell you there’s a deep sense of unease and uncertainty.

My neighbors, Eddie and Arora, for example, are very worried about crime – and they’re not alone. Eddie, who came here from Puerto Rico 71 years ago, thinks there are too many immigrants and not enough police. I didn’t ask if they voted in the City’s recent Mayoral primary election, but if they did, it’s likely they voted for Eric Adams, the former NYPD cop who ran as the working class, “law and order” candidate and received the overwhelming support of people in the Bronx.

Adams is likely to win the nomination and therefore, become only the second African American Mayor of the City after the election in November. But he will have done so by, to some extent, coat-tailing the populism and fearmongering of the previous President.

But the NYC Mayoral primaries are yet another source of uncertainty. There has been controversy about the maladministration of the count and this can only feed the deeper political scepticism that, like many other countries, has enveloped the US. Increasingly, commentary is focusing on how divided the nation is, even on the day that’s supposed to unite it. On July 5th, the New York Post devoted its front page and editorial to how “liberals” had besmirched Independence Day.

This political fracture is deep-rooted, but appears to have been exacerbated by COVID-19, which comes alongside the multiple other traumas the US has suffered recently, the murder of George Floyd at the end of May 2020 and the assault on the Capitol on 6 January to name but two. These seismic events took place against the background of sharp left-right political divisions and an economy that was increasingly unable to meet the needs of a large number of citizens, particularly when it came to housing.

Housing need and the pressure of the pandemic

According to the National Low Income Housing Coalition (NLIHC), there isn’t a single county in the US where someone working full time, earning the minimum wage, can afford a two-bedroom apartment without spending more than 30 percent of their income on rent (the widely accepted calculation of affordable housing). Instead, 75 percent of such households spend at least half their wages on housing. NLIHC reckon there’s a national shortage of 7 million affordable homes. Black and Latino people are disproportionately likely to be in housing need.

These issues are of huge importance in the Bronx. It’s the poorest borough in NYC, with a Median Household Income (MHI) of $40,000, compared to $86,000 in the richest, Manhattan. But even here, the socio-economic fissures are profound and complex, as Figure 1 shows. 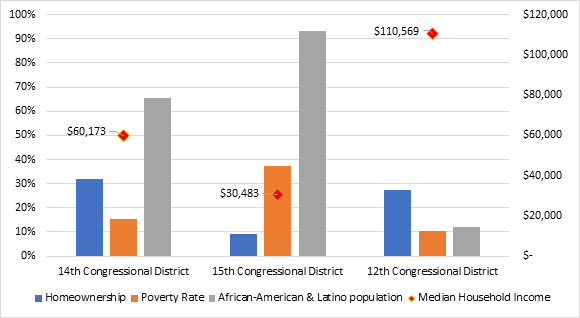 The relatively low homeownership rate in the 12th Congressional District, which covers part of the Upper East Side of Manhattan, is probably explained by the average property price of $1.08 million! I live in the 14th Congressional District (the seat of US House Democratic Representative Alexandria Ocasio-Cortez), just across the Bronx River from the 15th (represented by another Democratic Party “insurgent”, Ritchie Torres), which is the poorest in the US.

Housing has become the key quality-of-life determinant for millions of Americans, not just those in the big cities. On a recent webinar, I heard Whitney Reynolds from the Homeless and Housing Coalition of Kentucky describe the situation in her sparsely populated state, where “even the biggest cities are small towns”, but there’s a 70,000 shortage of truly affordable homes. Things are bad, but they could soon get worse.

Under the extreme pressure of the moment, during the pandemic, there’s been a Federal moratorium on evictions. Ironically, it was issued not by the government’s housing department, but the Centre for Disease Control (CDC), a vivid acknowledgment that housing and health are intrinsically linked. But the eviction ban, which was always qualified and sometimes honored in the breach, is due to end on July 31st. Partly because of a more dynamic campaign coalition, the ban in New York State is in place until the end of August. 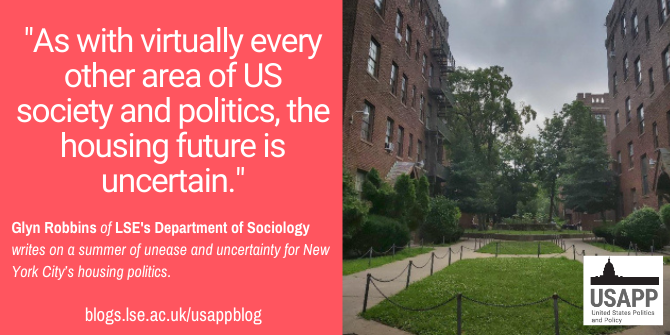 Nobody knows what’s going to happen next. But there are some numbers that give us a clue. Even pre-COVID-19, there were 230,000 New Yorkers in the legal pipework that could lead to eviction. A well-informed source of mine reckons you can double that when the courts re-open and there could be one million people in the State living under the threat of losing their home by the end of the year. Some estimates say there is $2 billion of unpaid rent in New York, the result of people losing income, through no fault of their own, because of the pandemic. There are various mitigation programs around the country, but they are beset with bureaucratic inertia and in any event, may not be adequate to prevent a housing catastrophe the likes of which the US hasn’t seen since the 1930s.

Ultimately, housing is about politics and the extent to which the US avoids this fate depends on decisions taken in Washington DC. The Biden administration is making encouraging noises and there are several pieces of legislation in the offing that could begin the process of changing America’s disastrous housing policy, by seeing the issue as part of the national infrastructure and COVID-19 recovery effort. It’s particularly promising to hear national politicians like Senator Elizabeth Warren seeking serious investment in the nation’s depleted, but much needed, public housing stock, a commitment that is long overdue from UK politicians.

As with virtually every other area of US society and politics, the housing future is uncertain. The machinations of the Congress could yet dilute attempts to defuse the volatility of the market and revert to what geographer and urban planner Samuel Stein tellingly refers to as “the real estate state” that has caused so much damage for decades – and it could be we ain’t seen nothing yet!

But one of the things that keeps bringing me back here is the indomitable spirit, creativity and resilience of the people. Just along from my apartment on Allerton Avenue is an architecturally striking housing block that used to be the Amalgamated Workers Cooperatives – “The Coops” – a 750-home development built in the late 1920s by trade unionists wanting not just better homes, but a more sociable, healthy, educated life. It’s a reminder that housing misery and its many consequences aren’t inevitable, either in the US, or anywhere.