On January 9th, 17 people lost their lives in a fire at the Twin Parks apartment block in the Bronx in New York City. Glyn Robbins draws parallels between this tragedy and the 2017 Grenfell Tower fire in London. He writes that policies of private sector provision of affordable housing on both sides of the Atlantic have failed – and only renewed government investment, with democratic control, can create good quality, safe homes for those in need.

The deadly fire at the Twin Parks apartment block in the Bronx on January 9th came as no surprise. It immediately brought memories of Grenfell Tower in London, where 72 people lost their lives in a fire in June 2017, and there are some stark similarities. But such shocking incidents reflect a systemic failure. Decades of misguided policy, throughout the world, have created a situation where housing has become a matter of life or death for millions. The risks are disproportionately borne by poor people of colour and intensified by the pandemic, with messages to “shelter at home” raising numerous issues about deep-rooted housing and socio-economic inequality. Only a fundamental rethink of how society treats the basic human need of shelter will prevent more tragedies.

Like many Londoners, I’ll never forget the morning of 14th June 2017. News of the Grenfell fire was emerging as I cycled to my job managing a council estate with similar characteristics. Over many years, I’d seen fire safety relegated as a priority, alongside cuts in public services and an increasingly commercialised culture that was institutionally deaf to the concerns of tenants. Although we still await the findings of the official inquiry, it’s already clear that cost-cutting, short-cuts and profit-seeking were among the root causes.

The same will be found at Twin Parks. I lived two miles up the road for six months last year and spent a lot of time with housing justice advocates in the Bronx, a place that’s no stranger to the dangers of poor housing, fire, municipal abandonment and rapacious landlordism. Some of the conditions I saw were appalling, with many blocks in a state of neglect and tenants telling stories of indifferent private landlords. As at Grenfell, Twin Parks tenants had been complaining about poor services and disrepair for years, with the owners issued warnings for numerous violations of safety and maintenance codes, all to no avail.

Despite this – and in another echo of Grenfell – the immediate reaction of some politicians was to shift-blame towards tenants. Speaking the morning after, newly elected New York City Mayor, Eric Adams, implied the fault for the fire lay with residents failing to close doors, ignoring the legal requirement for automatic door closing mechanisms, or the complaints about inadequate heating that compelled Twin Parks residents to use dangerous radiators. 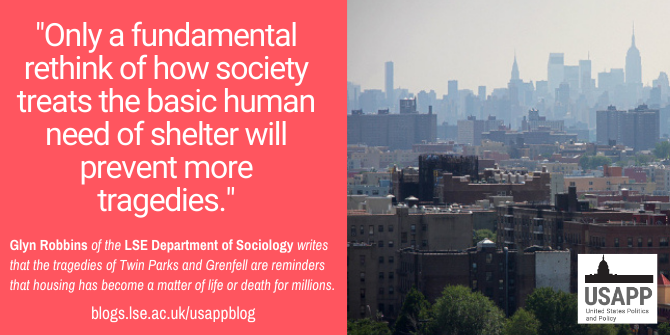 Deeper problems with affordable housing provision in the US and UK

As with Grenfell, there are signs of unhealthy links between local political figures and the property industry. A co-founder of one of the companies that owned Twin Parks was an advisor to Mayor Adams. But this reflects a deeper problem with the provision of so-called affordable housing in New York City, London and many other places.

For decades, the political orthodoxy has been that the private sector is willing and able to provide good quality, safe and secure homes that working class people can afford, in adequate numbers to meet the demand. The evidence – by housing need, homelessness and deaths – is that this policy has failed.

Despite this, private companies, including those nominally defined as “non-profits”, are facilitated through political support and public money to perpetuate a system of property speculation that reduces safe and secure housing to a lottery. Twin Parks was only one building in a portfolio of “affordable” housing blocks held by owners with minimal democratic accountability for their activities. As Pablo Estupinan from Community Action for Safe Apartments (CASA), an advocacy group in the Bronx, says, city authorities rarely enforce even basic standards on landlords who remain free to make huge profits, even during a pandemic.

This situation is set to continue and worsen. On Saturday (15th January), the COVID-19 eviction protections repeatedly fought for and won by New York tenants over the last two years, are due to expire, posing a threat of homelessness to thousands. Once again, people of colour, like the victims of Twin Parks and Grenfell, are more likely to suffer. Those who lose their homes will again be at the mercy of an under-regulated, over-priced market where lives are sacrificed at the altar of private profit. Tragically, the action promised by the Biden administration to address such brutal, historic inequities in the form of investment in public housing as part of “Build Back Better“ remains undelivered.

High-profile events tend to obscure the daily human cost of our wasteful and sociopathic housing system. It doesn’t have to be this way. Rebuilding public services – and trust in them – can help make homes safer by enforcing existing regulations and penalising owners and landlords who breach them. It can become a requirement that tenants are listened to and treated with respect. But ultimately, whether it’s housing, health care or energy supplies, private profit and the public interest don’t mix. As environmental and pandemic threats become our future-present, only large-scale government investment, with democratic control, can build and maintain homes that aren’t death traps, in cities that don’t cost us the earth.