President Joe Biden came into office with a plan to “Build Back Better” following the COVID-19 pandemic and four years of the Trump presidency. A key part of this agenda is a $3.5 trillion spending plan covering affordable and public housing, infrastructure, childcare, and measures to tackle climate change. Glyn Robbins writes that success for Biden’s spending plan in Congress could ease many of the pressures now felt throughout US society. But failure, he argues, could add to the already growing disillusionment with government, and open the door for Donald Trump’s return in 2024.

It’s hard to overstate the significance of the current political situation in America. President Biden has called it an “inflection point” and he’s right. The next few weeks could determine not only the fate of his presidency, but the future for the next generation of Americans, perhaps with global consequences.

In July, I wrote for this blog about the nation’s unease and uncertainty, particularly in relation to housing. Since then, the situation in New York, at least, has eased. The threat of a huge rise in evictions, caused by unaffordable housing and loss of income during COVID-19, has receded. On the 1st of September, after a vociferous grassroots campaign, protections for New York tenants and mortgage-payers were extended by the State’s politicians until 15th January 2022. This respite may be temporary but is nonetheless welcomed by the hundreds of thousands of households threatened with homelessness. For many Americans in other places, it’s already too late, with the US federal eviction moratorium struck down by the Supreme Court.

The new year will undoubtedly see a replay of this summer’s anxiety in New York and beyond. But by then, the nation’s housing future and broader political landscape could have changed significantly. Within the Democratic Party’s much touted $3.5 trillion “Build Back Better” human infrastructure package is a commitment to spend $327 billion on affordable housing, including $80 billion for public housing.

The term “affordable” housing has become vexed, both here and in the UK. However, contested definitions are not the most immediately important feature of the Biden plans. They represent a potential shift of direction away from housing and other vital services being dictated and delivered by the private sector, towards greater public investment and control.

The budget for public housing is unprecedented. For decades, US public housing has been the target of disinvestment and denigration, to the point that it was almost a taboo subject. When I wrote about It for The Guardian in 2012, the suggestion that a US government would seek to spend serious money on what was widely perceived as “housing for poor people” was unthinkable.  That it could happen now reflects the much wider socio-political forces that have created an instant – and potentially deepening – crisis for the Biden administration. 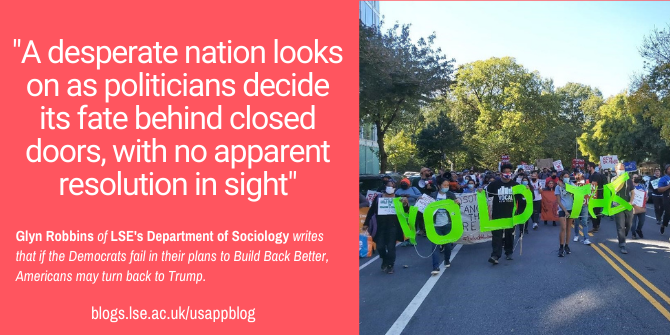 20 October 2021, Protest in Brooklyn of people calling on politicians to “Hold the Line” on Build Back Better. Credit: Glyn Robbins

The Black Lives Matter uprisings have brought what is widely recognized as a “racial reckoning” for the US. Investment in public housing, where the overwhelming majority of tenants are people of colour, should be seen in that context. But the housing crisis more generally speaks to the underlying concern about the US economy. Rents have been identified as a key metric in rising inflation, one of the many volatilities emerging with COVID-19 recovery, which include a significant increase in industrial disputes during what is being described as “Striketober”.

These various pressures are felt throughout US society, but particularly by younger people. I’ve just been chatting on the train to Albany with a young woman returning to college in Vermont. She was talking about the inter-linked burdens of student debt, rent, and finding a well-paying job, a challenge faced by millions. This, in essence, is what Biden’s plan hopes to address, with additional measures to help people with childcare and medical costs, as well as beginning to tackle climate change.

The scope of the spending ambitions genuinely bear comparison with the 1930s New Deal, but the Democrats don’t have the electoral numbers to go with them. Biden’s Congress majority is wafer-thin, hence the current stalemate, as a period of haggling continues in Washington DC, with the Republicans and two Democrat Senators (West Virginia’s Joe Manchin and Arizona’s Kyrsten Sinema) seemingly holding up the whole agenda.

However, this “Inside the Beltway” narrative doesn’t entirely explain what’s going on. Certainly, the ability of some politicians and lobbyists to frustrate the will of the President and the people is being exposed. But there is a more fundamental issue about the extent to which the political establishment has become detached from the concerns of most US citizens.

Democrats are leaving it to the White House

Polling indicates broad support for the $3.5 trillion spending plan, but even Progressive politicians appear reluctant to call for a popular mobilization to force the issue. I recently attended a virtual Town Hall meeting with my local congresswoman, Alexandria Ocasio-Cortez (also known as AOC) and Representative Jared Huffman from California, at which the latter said, “We’re depending on the White House to get this done”. This suggests an abdication of political responsibility that in turn reflects fear. The nation is in such a heightened state of apprehension, particularly since the January 6th capitol insurrection, that politicians are reluctant to do anything that might be seen as stoking tensions. So even AOC, who was propelled to prominence by a grassroots movement, is playing it safe. 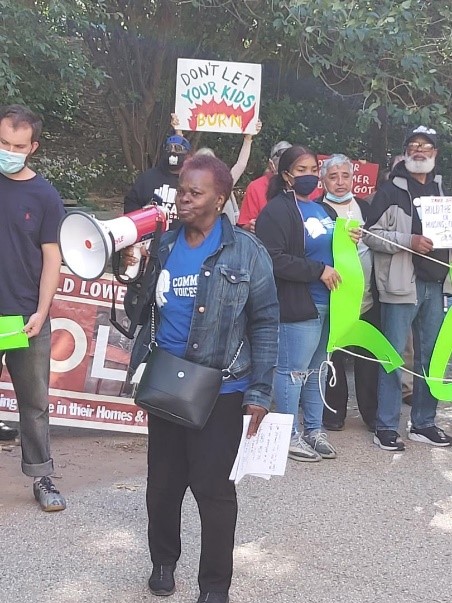 20 October 2021, Protest in Brooklyn of people calling on politicians to “Hold the Line” on Build Back Better. Credit: Glyn Robbins

The net effect of all this is that a desperate nation looks on as politicians decide its fate behind closed doors, with no apparent resolution in sight. The latest deadline for passing the budgets is 31st October, and appropriately on Halloween, this is scary stuff. It’s most likely that a compromise will be arrived at. There are already suggestions that spending on environmental protection, reducing drug charges and housing could be sacrificed, sops to the fossil fuel, big pharma and real estate lobbies respectively.

This could very quickly have adverse political consequences for Biden and the Democrats. There are several elections on 2nd November (including state and Congressional races) the results of which could indicate how quickly disillusionment has set in, which could be compounded in the mid-terms a year later. Now, as much as ever, people will vote for politicians they see as delivering genuine improvements to their daily lives. Build Back Better promises to do precisely that. If it fails, or is substantially watered-down, Biden’s credibility will collapse, as it already shows signs of doing.

Is this the Democrats’ last chance to stop Trump’s return?

That will be bad for Biden and the Democrats, but worse for struggling Americans who will inevitably seek alternatives. When I arrived in the US four months ago, Donald Trump was becoming a peripheral figure outside his loyalist base. That has changed within the last couple of weeks, as the budget impasse continues, and Biden’s popularity drains away. It is now widely predicted that Trump could return. In a recent interview with Politico, Fiona Hill, who used to work for him on the National Security Council, has spelt out what that could mean:

I feel like we’re at a really critical and very dangerous inflection point in our society, and if Trump — this is not on an ideological basis, this is just purely on an observational basis based on the larger international historical context — if he makes a successful return to the presidency in 2024, democracy’s done.

Clearly, if Ms. Hill is right, that has implications for all of us. But one of the main reasons for Trump’s 2016 success was the perception, however false, that he understood the concerns of ordinary Americans and was willing and able to do something about them. This is a lesson liberals and Progressives in the Democratic Party appear to have failed to learn. The next few weeks and their ability to produce real and lasting reforms towards a more equal and sustainable society could be decisive. Unless something changes quickly, history could be about to repeat itself as tragedy.

But it’s not inevitable. As I contemplate prospects for this country, I think about my home, the UK. My parents were born at a time when the quality of life for working class people like them could be as precarious as it is for most Americans today. They lived to see a comprehensive, “cradle to grave”, system of universal public services, paid for by taxation, that saved and improved the lives of millions. The UK Welfare State wasn’t inevitable either (and is now seriously at risk). It had to be fought for and won, through a combination of active popular support and political resolve. That’s what the US needs now.