Given the protectionist policy statements of Trump, Clinton and Sanders, will America soon see a retrenchment of its trade policies away from globalization? In the first in a series of commentaries from the US-Europe Dahrendorf Forum working group, Julia Gray argues that while it may be politically expedient for candidates to oppose trade deals, history shows that they are rarely shy about implementing them once in office. She writes that it’s also important to remember that though governments sign trade deals, trade is ultimately in the hands of firms; trade will likely continue in much the same way whether or not trade agreements are fully implemented.

Scary things seem to be emerging from the electorates in the US and Europe alike. Donald Trump has threatened to “rip up” NAFTA; Hillary Clinton and Bernie Sanders both have spoken out about the Transpacific Partnership (TPP) as well as the Transatlantic Trade and Investment Partnership (TTIP). Meanwhile, in recent elections, voters in Germany supported an anti-migration party even in Merkel’s strongholds. And much of the rhetoric surrounding the UK’s Brexit referendum links to fears about migration and trade.

What is new here, and what is cause for concern? Politicians always have incentives to speak out against trade deals on the campaign trail, but this very rarely translates into policy once those leaders enter office. Furthermore, it’s debatable whether any one of the debated trade deals will really impact these economies.

What’s New, and What Matters?

The first question to ask is whether the rhetoric we see on the campaign trail is new. I’d argue that it isn’t particularly. As we know, trade deals tend to be broadly unpopular; the cooperative gains from trade have large overall benefits, but those benefits are diffuse. They take the form of a reduction of government and producer surpluses, shifting the surpluses instead to the consumer — but those surpluses usually take the form of broader consumer choice and relatively lower prices for goods. These gains aren’t nearly as tangible to most voters as the losses experienced and seen in shuttered textile mills, nor do they play strongly against xenophobic rhetoric about goods “Made in China.” Even in capital-intensive states and countries, which should benefit from trade, this type of rhetoric is prevalent around elections.

However, it’s always been politically expedient for a candidate to decry trade deals on thee campaign trail and then quietly go about setting them up once in oﬃce. In the US, this is particularly true for the Democrats, in recent years. Both Obama and Hillary Clinton decried NAFTA in various debates in the 2008 (and both had voted for trade deals during their time in the Senate). But although he delayed the ratification of many of George W. Bush’s preferential trading areas (PTAs), Obama did ask for — and receive — fast-track trade promotion authority to enable him to make advances in the TTIP and the TPP. For her part, Clinton as Secretary of State went on to promote both of those deals to leaders abroad.

Particularly in the US, anti-trade posturing plays well in the electorate. Trump and Clinton alike have been leaning on protectionist threats as the electoral contests move to the Midwest, a part of the country that tends to lose out from trade deals. But rhetoric aside, does the current debate give any hints as to the actual policies that will be undertaken by the next commander in chief? 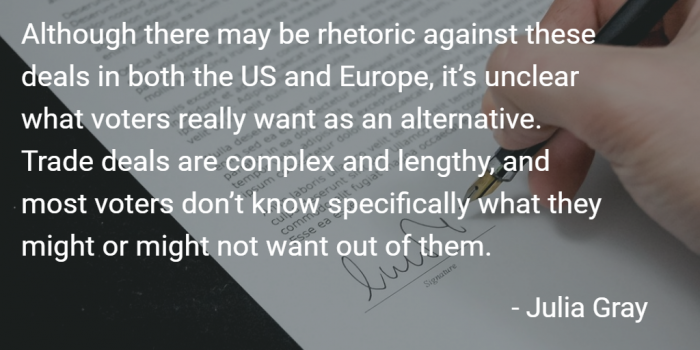 Both the academic and popular accounts of trade agreements tend to place too much emphasis on simply whether they are signed. That is, a lot of the journalistic accounts of trade agreements more generally focus on the signing and negotiation stage, but very rarely follow up to look at whether and how those agreements, once signed, are implemented. My own research points to the many reasons to question whether international agreements translate into domestic policy change. Empirically, many trade agreements that have been signed are simply “zombies”, existing on paper without being put into effect. What might account for this?

First of all, the implementation of agreements is difficult to monitor, and it often falls by the wayside. Research that I’ve done with Jeff Kucik shows that even though leaders infrequently exit or renegotiate agreements — as they often threaten to do on the campaign trail — they often simply do not implement agreements is far more common. We show that when a new leader takes office, implementation of the previous regime’s economic agreements tends to drop. This is particularly true if the party is on the left in terms of ideology. We argue that this is because when new leaders come into power, they are beholden  to different constituencies and will prioritize those constituents’ needs above implementing the bargains made by previous regimes. This isn’t necessarily a malign takedown of trade agreements, as is often foreshadowed on the campaign trail. Rather, it’s often a lack of conscious attention to the implementation of previous agreements, in favor of the more pressing demands of a new leader’s constituencies.

In our work, we learned that it’s very tricky to measure the implementation of trade agreements over time. PTAs do not have built-in monitoring, compliance, or enforcement mechanism. The WTO itself does not provide any top-down, or “vertical” enforcement; it instead relies on other member states to monitor and litigate one another “horizontally.” Other PTAs operate in much the same way, and even if they do have dispute settlement mechanisms as part of their provisions, these mechanisms are very infrequently used. So how would we know if, say, the US-South Korea PTA is being implemented? Very little research looks carefully at the degree to which PTAs fulfill their mandates — and the research that does exist suggests that there is an implementation gap in what agreements promise and what they deliver.

Although there may be rhetoric against these deals in both the US and Europe, it’s unclear what voters really want as an alternative. Trade deals are complex and lengthy, and most voters don’t know specifically what they might or might not want out of them. Even Trump has commented on the difficulty involved in parsing these agreements, saying of the TPP, “It’s too complicated. It’s too big. Our people have never even looked at it or read it. We don’t know what the hell it says. We should not do it.”

What do those low rates of implementation mean for the political rhetoric, and what in turn might that mean for the transatlantic relationship between North American and Europe? It shows that the glue between these policies is the trading relationship— and those dynamics are often removed from politics even in the best of times. Even after the 2008 financial crisis, politicians seemed to resist protectionist rhetoric or measures. To the extent that we understand what drives firms to take advantage of trading relationships, it is safe to assume that those dynamics are unlikely to be under threat. Protectionist rhetoric rarely translates into subsequent policy, and the record is mixed on whether firm trading behavior maps international agreements.