On Saturday, The Foundry reports on two sisters in Philadelphia who have been able to successfully fight the seizure of their home by the city after their brother was arrested for drug dealing on their premises. They report that such seizures by Philadelphia law enforcement netted them nearly $6 million in 2009-2010 alone. They say that cases such as this are evidence that laws that allow this type of civil asset forfeiture are badly in need of reform.

Over in New Hampshire, Granite Grok shares some thoughts after attending a recent pro-Second Amendment rally in the state. They say that the event showed that people do take politics seriously, and that it is disappointing that many were largely ignored by the New Hampshire GOP, including Scott Brown, who has an eye on one of the state’s Senate seats in 2014.

With the holiday spirit in mind, Save Jersey covers a light-hearted ‘Festivus’ Twitter spat between one of the state’s Senators, Cory Booker, and his Congressional colleague, Rand Paul (R-KY). Many commentators reckon that the recently re-elected Republican Governor of New Jersey, Chris Christie, will seek the Presidency in 2016. With this in mind, Blue Jerseylooks at map of the U.S. which shows where people will be losing unemployment benefits from the 1st of January, 2014 – New Jersey looks to be the worst, with 90,000 set to lose benefits. 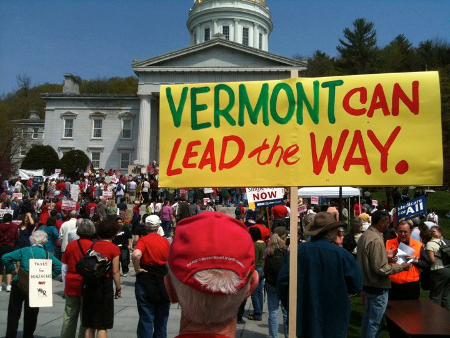 In Vermont, VTDigger covers a new Federal grant of nearly $37 million which will fund low income and children with high needs to succeed in school. They say that the funding is important for Vermont, as previous grants have tended to go to more populous states. Still in Vermont, The Atlantic wonders if the state’s new single-payer healthcare plan will be a good example of reform for the rest of the country (if it is successful, that is).

This week, Crooks and Liarscovers the recent condemning of Congressman Steve Stockman’s (R-TX) campaign office. They say that campaign staff who have been sleeping there have been ‘living in filth’. Still in Texas, Burnt Orange Report takes a close look at the Texas Association of Business’ (TAB) challenge against the Environmental Protection Agency’s newest greenhouse gas regulations. The TAB argues that the new regulations will create a ‘chilling’ effect on business expansion, and may lead to higher prices for consumers.

Meanwhile, the Arkansas Times blog argues that the state’s office of Lieutenant Governor should be abolished given recent accusations that the current office holder, Mark Darr, has abused his office’s expense account for personal travel.

In light of recently improved growth figures for the U.S., Florida’s SaintPetersBlog writes on Monday that the state is at the forefront of the country’s move out of the Great Recession, especially with unemployment figures below the national average and rising house prices.

In Virginia, Bearing Drift writes that they are disappointed at the state General Assembly’s lack of action on pushing a more localist agenda, especially in the area of education. Meanwhile, Blue Virginia looks at the challenges facing the state’s Democratic Party, saying that in recent elections, Democrats seem to have done worse in certain counties than they would otherwise have been expected.

Red State previews the coming Democratic gubernatorial primary in Maryland, writing that it is going to be an interesting one, given potential candidate’s links to Obamacare (and the problems contained therein), and another candidate’s dysfunctional campaign.

In Ohio, Daily Kos reports that, after a review of the nearly 6 million votes cast in 2012, only 17 non-citizens were found to have voted. Despite this lack of voter fraud in the state, however, Republicans are still keen to make it harder for people to vote by pushing forward bills that would reduce early voting and end same-day registration, as well as voter ID laws.

South Dakota’s Madville Times reports that the state’s undergraduates face the third highest costs in the eight state region. While they praise Governor Daugaard’s recent proposals for a tuition fee freeze, they say that in order to encourage greater economic development, more needs to be done to reverse a decade of neglect in higher education policy. Moving north, North Dakota’s SayAnything blog says that the state is the only one that has added more jobs than people, something they put down to an energy boom in the midst of a country-wide recession.

This week a Federal judge ruled that Ohio must recognize out of state same-sex marriages, reportsOutside the Beltway. While the ruling only applies to death certificates, they say that it will help those who wish to attack the entirety of Ohio’s same-sex marriage ban, as well as similar ones in other parts of the country.

In Wisconsin, Blogging Blue looks at the state’s incarceration problem, writing that it ranks #1 in its incarceration rate for black men – one in eight are currently in state prison. They wonder if this high rate of imprisonment is a sign that the Civil Rights Act should be expanded to states in the North as well as the South. 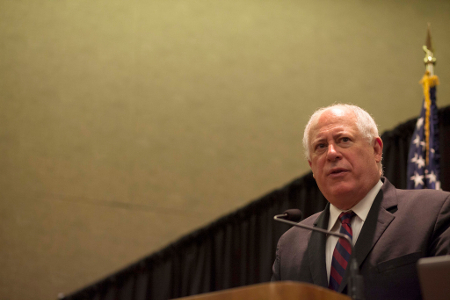 Illinois’ Capitol Fax says that the biggest politics story in the state that year is that of Governor Pat Quinn, who has gone from being ‘hopelessly lame duck’ to ‘sitting pretty’. They attribute Quinn’s success to two potential Democratic primary challengers unexpectedly dropping out, as well as appointing a rare ‘conference committee’ to sort out pension reform in the state.

On Saturday, Outside the Beltway reports that a Federal judge has struck down Utah’s ban on same-sex marriage, something that has caught many by surprise given that it is considered to be one of the most conservative states in the U.S. State officials in Utah are expected to appeal the ruling.

In Hawaii, Honolulu Civil Beat writes that the University of Hawaii has launched an innovative plan to deal with its financial crisis (it has an $487 million financial hole) by requesting funding from the state Legislature to deal with its facilities backlog that would modernize facilities and make them more efficient.

Recent weeks have seen a great deal of speculation that the current Governor of California will run for the presidency in 2016. Calbuzz disagrees with this notion, writing on Tuesday that he will not because of his age (he is 75), because he doesn’t have a political operation to speak of at the moment, and because he is loving being the Governor of California. Still in California, Roll Call says that the state’s 17th Congressional District race next year will be one of the most fascinating, given that it will very likely pit two Democrats against one another due to the state’s top-two primary system. Over in the state’s 39th district, Republican Representative Ed Royce has filed a statement of candidacy for re-election this week, but seems to have accidentally listed the state’s 40th district, a Democratic stronghold, writes Sacramento Bee.

This week, Colorado Peak Politics looks over the end of year tweets from the state Senate’s Democrats, saying that they should not be so quick to congratulate themselves, especially since two of their Senators were recalled this year. Staying in Colorado, Hit & Run says that starting on New Year’s Day, some businesses in the state will be able to sell marijuana products for general use, provided they have been given approval by their local authorities.

Finally, Crooks & Liars reports that Phoenix, Arizona has become the first American city to reduce its number of chronically homeless veterans to zero. This has been achieved via a state coalition to end homelessness among this group and an allocation of funds from the city.