Has the decline in manufacturing and clerical jobs been responsible for the lagging wages of middleskill workers in the United States? To answer this question, Michael Boehm compares the occupational choices and earnings of survey respondents in the 1980s and today.

The decline of the middle class has been much debated in the United States and elsewhere in recent years. The first important component of this decline is the fall in the number of well-paid middle-skill jobs in manufacturing and clerical occupations since the 1980s. Figure 1 depicts this phenomenon of ‘job polarisation’.

Figure 1: Changes in US employment shares by occupations since the end of the 1980s

The second important component is the drop in relative earnings for workers around the median of the wage distribution over the same period. This is depicted in Figure 2.

Figure 2: Percentage growth of the quantiles of the US wage distribution since the end of the 1980s

Notes: The chart depicts the change in log real wages along the quantiles of the wage distribution between the two cohorts for the NLSY and the comparable years and age group in the CPS.

Economic research, much of it conducted at CEP, has illuminated the first component of the decline in middle-skill jobs. It has done this by relating job polarisation to rapid changes in information and communication technologies, which have made it possible for machines to take on the routine tasks previously done by workers in middle-skill jobs.

To date, the second component of the decline of the middle class – lagging wages – has not had as much academic scrutiny. In particular, there have been no studies that closely link the stagnant earnings for workers around the median of the wage distribution to the decline in middle-skill jobs. My research addresses this issue by asking three interrelated questions:

I answer these questions by analyzing two waves of a representative survey of young workers in the United States carried out in 1979 and 1997. The survey responses provide detailed and multidimensional characteristics of these young people that influence their occupational choices and wages.

1% higher probability of working in low-skill services jobs compared with middle-skill jobs attenuates from -1.65% to -0.95% over the same period. I find similar results when controlling for college education, which is arguably a measure of absolute skill. This suggests that it is indeed the relative advantage in the middle-skill occupations for which the returns in the labour market have declined.

In the next step of my analysis, I estimate the changes in relative market wage rates that are offered for a ‘constant unit of skill’ in each of the three occupational groups. We can think of wage rates paid per constant unit of skill as the hypothetical change in wages had the workers in the middle-skill occupations stayed the same across the two survey waves. To do this, I use a standard economic model of occupational choice. This predicts a tight relationship between workers’ occupational choices and their earnings and market wage rates across the two survey waves, which I use to estimate the wage rates.

Finally, I check what effect changing prices of labour may have had on the overall wage distribution. Figure 3 shows that the change in the wage distribution due to these price effects reproduces the overall distribution reasonably well in the upper half while it fails to match the increase of wages for the lowest earners compared with middle earners.

Figure 3: Actual and counterfactual changes in the US wage distribution

Notes: The chart plots the actual and counterfactual changes in the wage distribution in the NLSY when workers in the 1980s are assigned the estimated price changes in their occupations.

At first glance, this is surprising given the strong increase in relative wage rates for low-skill work and the increase in the wages of workers in low-skill occupations. The reason is that these workers now move up in the wage distribution, which lifts not only the (low) quantiles where they started out but also the (middle) quantiles where they end up. The inverse happens for workers in middle-skill occupations but with the same effect on the wage distribution.

But these are only price effects and there may be additional wage effects from workers moving out of the middle-skill occupations into high- and low-skill occupations that I cannot definitively quantify in this study. Moreover, other researchers have suggested that the substantial increase in wages at the bottom of the wage distribution (which is unique to the United States while job polarisation is also happening elsewhere) may be partly due to policy-related changes, such as the minimum wage and de-unionisation. So the results for the lower part of the wage distribution remain somewhat inconclusive.

Overall, my research confirms that job polarisation has had strong effects on workers’ relative wages. While further studies need to examine more closely the ambiguous results for the lower part of the wage distribution, we can already predict that ever expanding improvements in technology are a force that not only displaces workers further up and down the skill distribution but also leads to substantially declining wages for these individuals.

But as Alan Manning points out in another article in the most recent issue of CentrePiece, this need not necessarily be the case. If governments and individuals make the right counteracting investments in education and training to improve the supply of skills (especially for the least skilled people), job polarisation may not have overly adverse consequences on inequality in the future.

This article originally appeared in the Autumn issue of CentrePiece, the magazine of the Centre for Economic Performance (CEP) at LSE, and summarises ‘Has Job Polarization Squeezed the Middle Class? Evidence from the Allocation of Talents’ by Michael Boehm, CEP Discussion Paper No. 1215 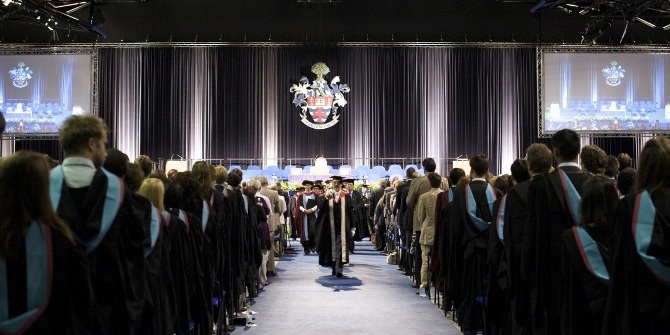