Last November the increase in benefits to the SNAP program of food assistance, put in place in 2009 as part of the American Recovery Act, expired. Craig Gundersen gives an overview of SNAP, writing that in 2012 it provided benefits to more than 47 million people. He argues that recent proposals that would fundamentally change and reduce SNAP assistance will reduce food security and well-being by increasing the program’s stigma and transaction costs, meaning that fewer households will enter the program. This is in contrast to recent reductions in SNAP benefits which will have more limited impacts.

Food insecurity is one of the leading public health issues in the United States.   Despite the end of the Great Recession, our food insecurity rate remains at very high levels. In 2012, the most recent year for which data is available, almost 50 million Americans lived in food insecure households.  The existence of food insecurity is a problem in-and-of-itself; compounding the problem are the multiple demonstrated negative health consequences that are associated with it.

The extent of food insecurity and its attendant consequences would be substantially higher without the food assistance safety net in the United States.  The largest food assistance program is the Supplemental Nutrition Assistance Program (SNAP, formerly known as the Food Stamp Program).  Approximately 47 million people in 2012 received SNAP, with total benefits totaling $74 billion. 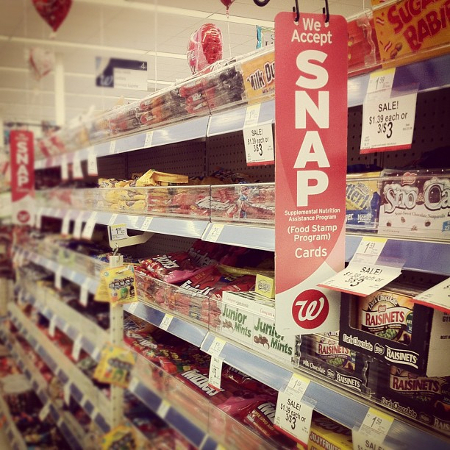 Despite the success of SNAP in meeting its central goal, policymakers have proposed two broad sets of changes to the program.  The first set of changes entail reductions in average benefit levels.  In November, 2013, SNAP benefits were reduced due to the early expiration of the increase in benefits from the American Recovery and Reinvestment Act of 2009 (ARRA) With the loss of funding provided from ARRA, SNAP benefits were set to the levels they would have been if the additional ARRA funding had not been put in place. More recently, the House and Senate have agreed upon a proposal to cut SNAP benefits by approximately $8.6 billion over the next ten years.  The vast majority of these cuts in benefits come from the removal of the tie-in of SNAP benefits with LIHEAP (Low Income Home Energy Assistance Program).   In recent years, SNAP participants receiving as low as $1 are eligible for larger monthly benefits, but the proposed bill increases the $1 threshold to $20; this would reduce the SNAP benefits that are based on heat-and-eat eligibility.

In the near-term, these cutbacks in SNAP benefits will mean that the program will be less effective in reducing food insecurity. These cutbacks, however, do not change the fundamental structure of SNAP so their impact on the efficacy of SNAP in the longer-term will be minimal.  In contrast, several recent proposals to place restrictions on SNAP purchases would fundamentally change the structure of SNAP.  The most well-known proposal to restrict SNAP was by the New York Department of Health and Mental Hygiene and Human Resources Administration.  This waiver request would have banned SNAP recipients from using benefits to purchase most beverages with more than 10 calories per 8-ounce servings.  This ban would have included sports drinks (e.g., Gatorade), soda (e.g., Coca-Cola), vegetable drinks (e.g., V8), and iced tea drinks.  For reasons not altogether clear, other products with more than 10 calories per 8-ounce serving would still have been allowed including milk, milk substitutes, and 100% fruit juices.  Other efforts to restrict SNAP purchases along similar lines (although some of these proposals would have also restricted purchases beyond beverages) have been put forth in Maine, Wisconsin , and South Carolina.

There is no doubt about the impact on food security from these restrictions, however.  Namely, the restrictions will lead to increases in stigma and transaction costs and this will lead to fewer households entering the program.  Stigma would increase insofar as, among other things, participants would feel singled out as being irresponsible and incapable of making well-informed food purchases for their children and themselves and, more broadly, the restrictions contain the implied message that that SNAP recipients have worse diets and are more likely to be obese.  The transactions costs associated with SNAP participation will increase for two main reasons.  First, SNAP recipients will need to devote extra time to ascertaining which food items are and are not eligible for purchase with SNAP benefits.  In stores where “SNAP eligible” or “SNAP ineligible” is clearly and correctly displayed, the legality of purchases with SNAP benefits would be straightforward. But in stores without such displays, SNAP recipients would need to ascertain this information on their own (i.e., the opportunity cost of shopping with SNAP will be higher).  Second, due to stores’ higher costs of implementing these restrictions, the number of stores accepting SNAP benefits will decline if restrictions were put into place. The result is that SNAP recipients will need to go longer distances to use their SNAP benefits.

In light of the lack of proven benefits to restricting SNAP benefits and the clear costs to restricting benefits – increases in food insecurity and general declines in well-being among low-income Americans –  the US Department of Agriculture has correctly rejected all proposals to restrict SNAP benefits.  Let us hope that it continues to reject these proposals.  Moreover, let us hope that these proposals will not go further and, instead, we who are interested in improving the well-being of low-income Americans can put our time and effort to identifying new ways to address food insecurity in the United States.

Craig Gundersen – University of Illinois
Craig Gundersen is the Soybean Industry Endowed Professor of Agricultural Strategy in the Department of Agricultural and Consumer Economics at the University of Illinois and Executive Director of the National Soybean Research Laboratory. Gundersen’s research is primarily focused on the causes and consequences of food insecurity and on evaluations of food assistance programs.