Food insecurity exists in every county across the U.S., making food assistance critical for millions in need.

Food insecurity exists in every county across the U.S., making food assistance critical for millions in need.

While food insecurity in America is by no means a new problem, it has been made worse by the Great Recession. Now, about 49 million people in the U.S. are living in food insecure households, and nearly 47 million receive assistance from national food banks.  Looking at the results of Feeding America’s Map the Meal Gap study,  Elaine Waxman, Amy Satoh & Craig Gundersen write that unemployment is a major driver of the food insecurity which exists in every county in the U.S. They argue that food insecurity can be addressed through improving people’s participation in federal food assistance programs, especially among children.

Addressing the challenge of hunger in a wealthy, developed nation like the United States requires a thorough understanding of the complexities of the problem. In September of 2014, the United States Department of Agriculture (USDA) released its most recent report on food insecurity, indicating that approximately 49 million people in the United States are living in food insecure households, nearly 16 million of whom are children.  Food insecurity has persisted at this high level since the Great Recession, and in August 2014, the nation’s largest domestic hunger organization, Feeding America, reported that it is now serving 46.5 million people annually through its nationwide network of food banks. While the magnitude of the problem is clear, national and even state estimates of food insecurity can mask the variation across the country.  In the absence of meaningful local data, it is difficult to educate the public and policymakers on the existence of hunger or to target services efficiently based on unique local conditions. 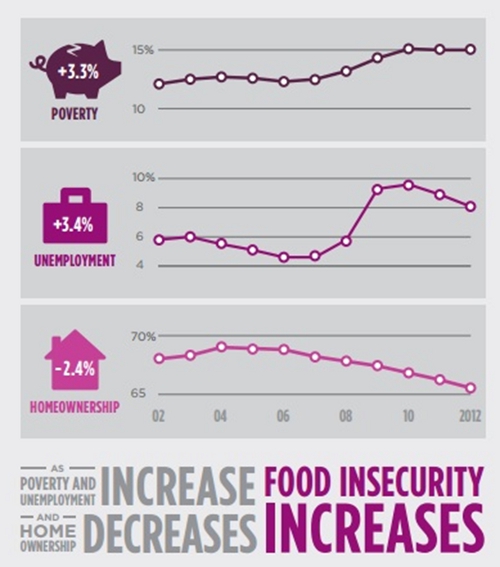 Figure 2 – Percentage of people per county who are food insecure 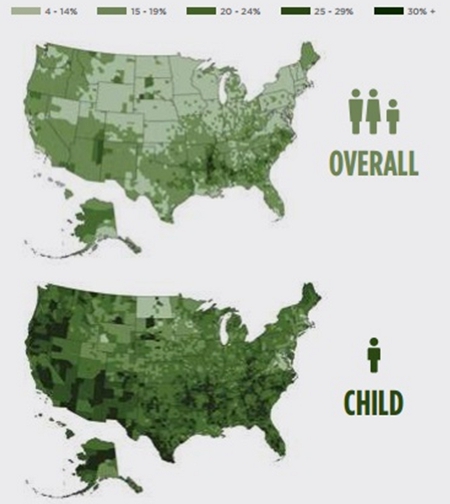 Additionally, by estimating the income resources of the food insecure population at the local level, MMG supports communities in assessing potential strategies that can be used to address hunger. For many households, the first line of defense can be federal nutrition programs, such as the Supplemental Nutrition Assistance Program (SNAP) and child nutrition programs like the Special Supplemental Nutrition Program for Women, Infants and Children (WIC) or the National School Lunch Program (NSLP). Income eligibility for these programs is tied to multiples of the federal poverty line (FPL). State-specific eligibility ceilings for SNAP range from 130-200 percent of FPL, while WIC and reduced price lunches are typically not available for children in households with incomes above 185 percent of poverty. 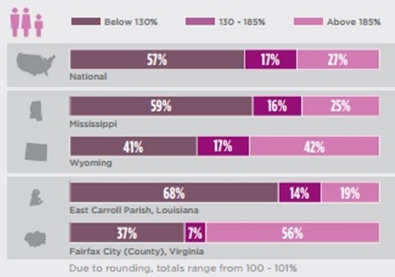 The National School Lunch Program is also an important component of efforts to reduce food insecurity, as is the School Breakfast Program. As with SNAP, there is room for improvement in participation rates in the School Breakfast Program in particular. Although more than 21 million children received free or reduced-price lunches in 2013, only 11 million received breakfast. In addition to encouraging efforts to increase participation during the school year, extension of food assistance to school children during the summer is also critical asonly 2 million children received food assistance during the summer.

Recent evidence has also found that WIC leads to reductions in food insecurity. Participation is high among infants – 83 percent of eligible infants receive WIC benefits – but it is not nearly as high among eligible children aged one through four (54 percent), and participation rates are especially low among older children.  Efforts to increase participation, including changes in the structure of the program to make it more appealing to older children, are encouraged.

Improved program access and innovative delivery models can also help improve participation. There are only about 43 summer food sites for every 100 school lunch programs nationwide. In addition to increasing the number of summer feeding sites, flexibility in implementing alternative summer delivery models can also increase program reach, e.g. strategies such as delivering meals directly to low-income neighborhoods rather than requiring families to find transportation to a summer site or allowing families to pick up a week’s worth of meals to eat at home rather than requiring children to travel to the site each day can help communities better reach those in need.

The Map the Meal Gap research is intended to shed light on the issue of food insecurity as a problem that exists in all localities across the United States. We encourage others to examine how local-level food insecurity data relates to other indicators of community well-being, such as health data, housing costs, and other economic measures. It is our hope that better local data can more effectively equip policy makers, program administrators, business leaders and concerned citizens to strengthen the fight against hunger in the United States.

This article is based on the paper, ‘Map the Meal Gap: Exploring Food Insecurity at the Local Level’in Applied Economic Perspectives and Policy.

Elaine Waxman – Feeding America
Elaine Waxman is Vice President of Research and Nutrition at Feeding America, the nation’s largest domestic hunger-relief charity. She has over 20 years of experience in public policy research and consulting and oversees numerous studies on food insecurity, client coping strategies, and charitable food assistance. Dr. Waxman received her Ph.D. from the University of Chicago School of Social Service Administration.

Amy Satoh – Feeding America
Amy Satoh is a Manager of Social Policy Research and Analysis at Feeding America, the nation’s largest domestic hunger-relief charity.  Her research projects are focused on food insecurity and related coping strategies of low-income populations including federal nutrition programs and charitable food assistance. She received her master’s degree from the University of Chicago School of Social Service Administration.

Craig Gundersen – University of Illinois
Craig Gundersen is the Soybean Industry Endowed Professor of Agricultural Strategy in the Department of Agricultural and Consumer Economics at the University of Illinois and Executive Director of the National Soybean Research Laboratory. Gundersen’s research is primarily focused on the causes and consequences of food insecurity and on evaluations of food assistance programs.