Looking at how candidates handle issues and their leadership capability can be just as effective at predicting presidential races as the strength of the economy.

Looking at how candidates handle issues and their leadership capability can be just as effective at predicting presidential races as the strength of the economy.

With every election come new and different models of forecasting the results. With presidential elections, most of these models tend to rely heavily on the state of the economy for their predictions. While these models are relatively successful, they do nothing to aid decision-making of parties, candidates, and voters. Andreas Graefe explains the Issues and Leaders model, which bases its predictions on how candidates are expected to handle issues and their perceived strength as leaders. He argues that not only is the model effective, but it provides valuable feedback for campaigns and voters.

Scholars have been developing quantitative models for forecasting US presidential election results for more than three decades now. Most of these models are so-called political economy models. That is, they predict the election based on a measure of the state of the economy (such as economic growth or unemployment rates) and one or more political variables (such as the incumbent’s popularity or the time the President has been in the White House). Political economy models are built on the idea of retrospective voting. That is, elections are regarded as a referendum on the government’s performance in handling the economy. If voters are satisfied with the incumbent’s performance, they keep the government in place; otherwise, they vote the party out.

Political economy models have a respectable track record in predicting election results. Their strategic value is limited, however; since the models do not include information about the candidates or the campaign, they provide little decision aid. There is not much that candidates, parties, and campaign strategists can learn from these models other than that incumbents benefit if the economy is doing well, and pay the cost in votes if the economy is doing poorly. Political economy models cannot provide advice on important questions such as who to nominate or which issues to emphasize. 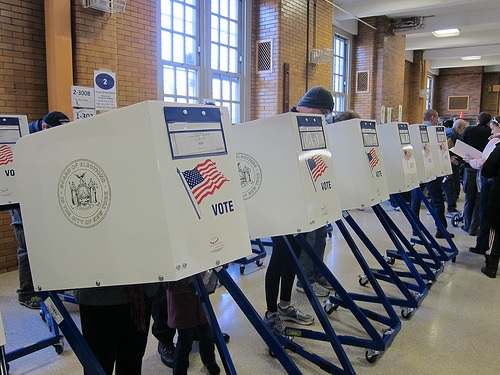 Within the research focus Forecasting Politics at the Center for Advanced Studies at LMU Munich, we are working on several models that help political strategists make better decisions. One of these models is the “Issues and Leaders” model, which departs from the idea of retrospective voting. Instead, this model builds on findings derived from a vast literature on individual voting behavior. This literature found that Americans elect their president based on three fundamental factors: party identification, issues, and candidates.

Party identification is the psychological attachment or loyalty to a political party and a long-term and stable predictor of individual vote choice. In addition, voters evaluate candidates in terms of their issue-handling competence and their personalities. In particular, voters favor candidates who they expect to best deal with the most important issues and who they expect to be strong leaders.

The Issues and Leaders model captures information about candidate evaluations by drawing on a large number of polling data for the 11 elections from 1972 to 2012. For example, issue-handling polls ask respondent which candidate they expect to do a better job in dealing with economic issues (e.g., jobs), foreign issues (e.g., Iraq), or other issues (e.g., health care). The results are then aggregated in an issues variable, weighted by the importance of issues within a particular election. Similarly, a leadership variable is calculated based on leadership polls that ask respondents which candidate they expect to be the stronger leader. The issues and the leadership variables are then used as predictors to forecast the popular two-party vote share of the incumbent party’s candidate.

The Issues and Leaders model performs well. An ex post analysis showed that, for the past four elections, the model’s forecasts, calculated three to two months prior to Election Day, were about as accurate as the best of eight established political economy models. More importantly, the model’s accuracy substantially improves over the course of the campaign, as more information about the candidates’ issue-handling competence and leadership skills becomes available. The Election Eve forecasts of the Issues and Leaders model were more accurate than the final Gallup pre- election polls.

Besides the gains in forecast accuracy, the biggest advantage of the Issues and Leaders model is its ability to provide decision aid for those involved in political campaigns. In particular, the model suggests three levers for candidates to increase their vote share. First, candidates should increase their issue-handling reputation. The most straightforward way to achieve this is to gain ownership of an issue by convincing voters that one is better in solving a particular problem than one’s opponent. Second, the model implies that more important issues have a larger impact on the election outcome. Therefore, candidates should direct the public’s attention to issues for which voters favor them and frame issues that favor the opponent as less important. Third, parties should nominate candidates that are likely to be perceived as strong leaders. For example, parties might want to nominate candidates with strong biographies.

There has been much progress in our ability to forecast US presidential elections over the past decade. For the past three elections, the combined forecast at PollyVote.com has provided highly accurate forecasts of the election outcome, starting months before Election Day. On average, the PollyVote’s Election Eve forecasts missed the actual outcome by little more than half of a percentage point. It seems unlikely that individual models, such as the Issues and Leaders model, can compete with the accuracy of a combined forecast in the long term. However, one area that has received relatively little attention in election forecasting is the improvement of forecasts’ ability to aid decision-making of parties, candidates, and voters. The Issues and Leaders model is a step in this direction.

This article is based on the paper “Issue and Leader Voting in U.S. Presidential Elections,” which was published in Electoral Studies.  The full research paper is freely available here.

Andreas Graefe – Center of Advanced Studies, Ludwig-Maximilian-University of Munich
Andreas Graefe is a research fellow at the Center of Advanced Studies and associated with the Department of Communication Science and Media Research, at the Ludwig-Maximilian-University of Munich. Andreas is also a caretaker of the PollyVote.com and a (co-)developer of several election forecasting models.