Asking voters who they think will win is one of the most accurate methods for forecasting elections available.

Asking voters who they think will win is one of the most accurate methods for forecasting elections available.

For decades political pollsters have relied on questions about people’s voting intention in order to predict who will win an election. But what about asking voters about their expectation of which party will win? In new research Andreas Graefe analyzes the accuracy of expectation-based forecasts in presidential elections from 1988 to 2012. He finds that such forecasts are, on average, more accurate at forecasting the election’s outcome than four more established methods.

“Who do you think will win the election?“ For more than half a century, pollsters have occasionally included this expectation question in their pre-election surveys. The answers, however, are almost never reported in the media. When covering election campaigns, journalists instead focus on the traditional vote intention question, which asks respondents for whom they intend to vote if the election were held today.

Journalists should more widely use expectations in their campaign coverage. In recent research, I analyzed the relative accuracy of expectation-based forecasts compared to four established methods for forecasting elections, namely intention polls, prediction markets, expert judgment, and quantitative models. Across the last 100 days prior to each of the seven US presidential elections from 1988 to 2012, expectations provided more accurate forecasts of election winners and the final vote shares than each benchmark method. Gains in accuracy were particularly large compared to intention polls: on average, expectations reduced the error of intentions by more than half.

The figure below shows the results of intention polls and expectation-based vote share forecasts that were published during the last 100 days prior to the 2012 election. The vertical axis shows Obama’s predicted lead in the two-party popular vote. The solid black line shows the final election outcome (Obama achieved nearly 52 percent of the popular vote and thus won by about 4 percentage points). The results from intention polls varied heavily and ranged from predicting a three-point lead for Romney to an 18-point lead for Obama. In particular, as the election came closer, a considerable number of intention polls saw Romney in the lead. In comparison, the expectation forecasts were much more stable, less extreme, and closer to the election result than individual polls. Expectation forecasts ranged from a one-point to a six-point lead for Obama and thus never predicted Romney to win. In other words, even during times when many intention polls showed Romney in the lead, citizens still expected Obama to finally win the election. 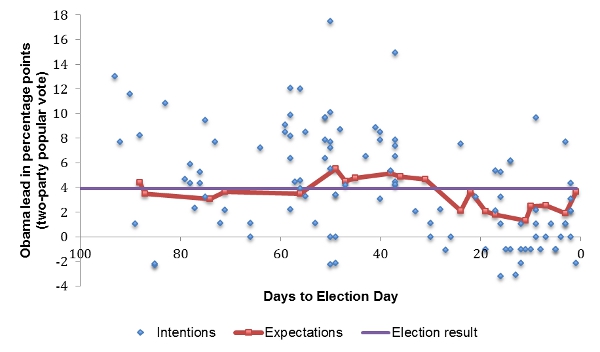 Furthermore, in contrast to intention polls, the expectation forecasts include responses from those who do not vote, who do not reveal for whom they will vote, and who are still undecided. Many of these people may have accurate expectations about the election outcome, since they are less influenced by partisanship and thus less subject to wishful thinking. Wishful thinking describes people’s tendency to predict their preferred candidate to win, a behavior that harms individual forecast accuracy.

So, given that citizens’ expectations provide such accurate forecasts, why have they been widely ignored by journalists when covering election campaigns?

One reason might be that the method is too simple. People tend to wrongly believe that complex methods are necessary to solve complex problems. However, especially when it comes to forecasting, simple methods are difficult to beat by more complex approaches.

Another, probably more important, reason is that journalists are more interested in newsworthiness than accuracy. In order to satisfy the needs of the news cycle, journalists constantly look for interesting stories. The large variance in traditional vote intention polls makes it easy to generate news by simply focusing on who is ahead in the polls or linking the latest poll results to campaign events, a behavior that harms the quality of campaign coverage.

As shown in the figure above, expectations are more robust and less extreme than intentions, and they rarely change. If journalists would pay more attention to expectations, they might overcome the horserace mentality of campaign coverage and be able to focus on providing explanations for the relative performance of candidates, such as their positions on the issues and proposed policies. Thus, expectations have the potential to increase the quality of campaign coverage.

This of course requires that pollsters regularly include the expectation question in their surveys, which is currently more exception than rule. Looking at the upcoming US mid-term elections, I found only one survey, conducted by Gallup from September 25 to 30, in which citizens were asked which party will win control of the House and the Senate. In both cases, citizens expected the Republicans to win.

This article is based on the paper ‘Accuracy of Vote Expectation Surveys in Forecasting Elections’ in Public Opinion Quarterly.