New polls show that Bridgegate has washed away almost all of Chris Christie’s post-Sandy political capital.

With New Jersey Governor Chris Christie’s ‘Bridgegate’ scandal now in its third week, Ashley Koning and David Redlawsk take a close look at how Christie’s state and national poll numbers have been affected. Using the latest data from the Rutgers-Eagleton Poll, they argue that although Christie’s approval rating stands at 53 percent, this needs to be seen in the context of his previously very high ratings in the wake of Superstorm Sandy in late 2012. They write that Christie’s bipartisan appeal has taken a serious hit, as reflected by his far less favorable impression among Democrats, and that his trustworthiness is now at an all-time low.

Approval for New Jersey Governor Chris Christie, now stands at 53%– a rating most politicians these days would envy, including President Obama. Given that a majority of New Jerseyans still support Christie, he may seem relatively immune to the scandals involving his administration that have unfolded this past month. But a look beyond this single data point to longer-term trends tells a different story. As new numbers continue to arrive in week three of the George Washington Bridge scandal, both state and national polls are drawing the same conclusions: Christie’s ratings – after sixteen months of unprecedented highs post-Superstorm Sandy – have dropped precipitously in the wake of Bridgegate.

Why the plunge? Perhaps it is that people both in New Jersey and across the nation do not believe Christie’s claims about the scandal. Fewer than half of U.S. adults say Christie is mostly telling the truth, and only a third believe his assertion that he had no knowledge of his aide’s involvement in the scandal. New Jerseyans are likewise generally skeptical, with more than half saying it is at least somewhat unlikely that these aides acted without his knowledge; a majority does not believe the explanation Christie gave at his January 9 press conference. (A comparison in PDF format of all statewide and national post-Bridgegate polling on Christie’s ratings and involvement with Bridgegate can be found here.) 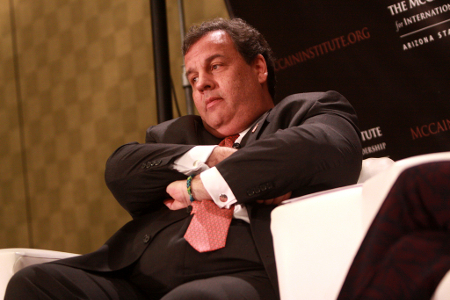 Now that a few weeks have passed since the initial revelations, polling makes clear the risk to Christie’s present and future. Post-Bridgegate, Christie’s New Jersey voters’ job approval is well below the 66 to 73 percent support he basked in for the sixteen months since Superstorm Sandy devastated the state, with a 15-points drop since November. Fewer than half of New Jersey voters now give Christie’s job performance an A or B – down 16 points – and 29 percent assign either a D or F, up 11 points since his re-election. And in a clear turnaround, both national and statewide polls show Christie trailing Hillary Clinton in a 2016 match-up driven mostly by a dramatic shift among independents.

Christie’s overall favorability rating, as shown in Figure 1 below, has suffered even more among voters in New Jersey – now practically split at 46 percent favorable to 43 percent unfavorable, down from 65 percent favorable just before his landslide re-election. After maintaining a favorable rating in the high 60s since Sandy, this is Christie’s lowest point in the past two years. National polls also show a spike in Christie’s unfavorable, which has doubled from a year ago, now at 34 percent to 38 percent favorable. 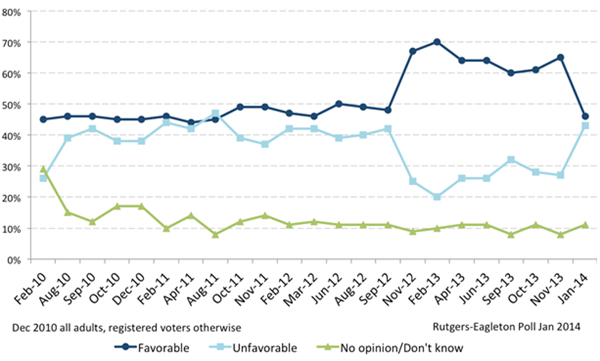 Above all, Christie has suffered most in the two areas that have been critical to his potential presidential image: his perceived bipartisanship and his personality. Bridgegate has all but obliterated the bipartisan good will Christie built up after Sandy, and has reopened the sharp partisan divisions that previously existed, driving away most of the Democratic voters who supported Christie’s re-election. It has also dampened the overwhelming support Christie was receiving from independents. Even some Republicans have been taken aback.

For example, in November, 45 percent of registered Democrats in New Jersey had a favorable impression of Christie. In the aftermath of the scandal just 19 percent now feel that way. Christie’s job performance rating is down 22 points among Democrats, to 29 percent approval. Republicans overall are still very positive, while independents are also more positive than negative, but both show noticeable declines as well. On the national stage, Christie has taken a somewhat smaller hit in his favorable numbers but the number of Democrats with unfavorable impressions has more than doubled from what it was a year ago.

Reinforcing this point, recent state and national polls show a clear partisanship factor in beliefs about the scandal. In New Jersey, Republicans mostly support Christie: two-thirds think he was likely unaware of what his staff was doing, and 80 percent accept his explanation, at least in part. But only a quarter of Democrats think Christie was unaware of his aides’ actions; more than half find it very unlikely he was out of the loop. Moreover, 62 percent of the state’s Democrats completely discount Christie’s explanation for what happened. National polls echo this divide: Republicans are about twice as likely as Democrats to believe Christie is telling the truth and that he had no knowledge of his staff’s actions.

Above all, the most significant damage done by Bridgegate is to Christie’s carefully developed image. Christie has always evoked strong emotionally charged reactions in both good times and bad due to his no-nonsense, tough guy persona. Christie’s personality propelled him to political stardom in the wake of Sandy, and his personality may now be his undoing.

Christie’s biggest personality challenge has always been to stay on the right side of the line between “strong leader” and “bully.” A number of public events in which the governor responded strongly to questioners led many to see him more as a bully. But post-Sandy, voters seemed to prefer his tough guy approach.

To look at this, the Rutgers-Eagleton Poll has been asking New Jerseyans about a wide range of traits and emotions that might apply to Christie since he first took office in 2010. This allows us to say with some authority that the bridge scandal has had a clear impact on key perceptions of the governor. As Figure 2 shows, “Bully” is now at an all-time high: 43 percent say the word describes Christie very well, up 9 points from November. Another 21 percent feel bully fits Christie “somewhat well.” New Jersey voters are also more inclined today to say Christie is “stubborn,” “arrogant,” and “self-centered” than they have been in previous polling. 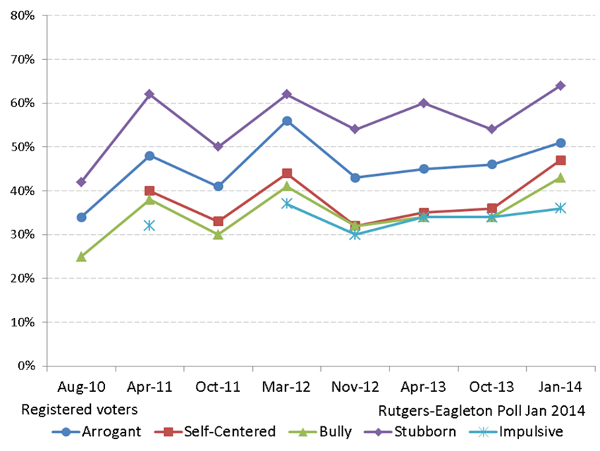 Perhaps even more important than Christie’s bully image is the fact that the events of the last few weeks have taken a distinct toll on New Jersey voters’ trust. While voters tend to not trust politicians, Christie has actually avoided being painted with that brush, as post-Sandy about 45 percent said “trustworthy” fit the governor very well, as Figure 3 illustrates. But that’s no longer the case. Use of “trustworthy” as a trait description is at an all-time low at just 27 percent saying the term applies very well, down 16 points. Other positive trait words also show clear declines. In particular, both “strong leader” and “fair” recorded double-digit declines from October. 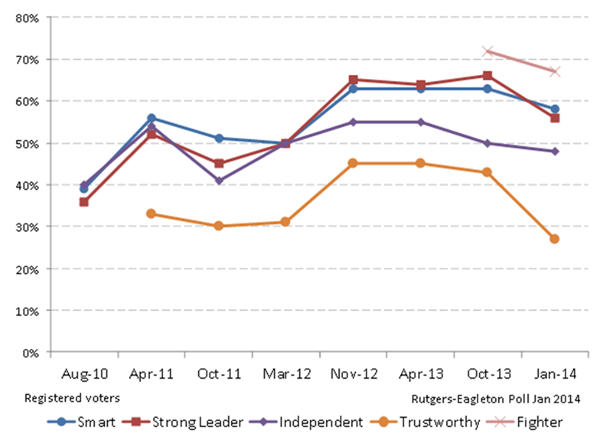 Not surprisingly, Bridgegate has also affected the emotional reactions that New Jersey voters report when they think or read about Christie. Feeling pride in and enthusiasm about the governor, after reaching high points after Sandy hit, are down to just 35 percent of voters. Instead, voters are angrier (at 40 percent, up 12 points) and more worried (41 percent, up 10 points) when they think about Christie – edging back to levels not seen since Christie first took office. 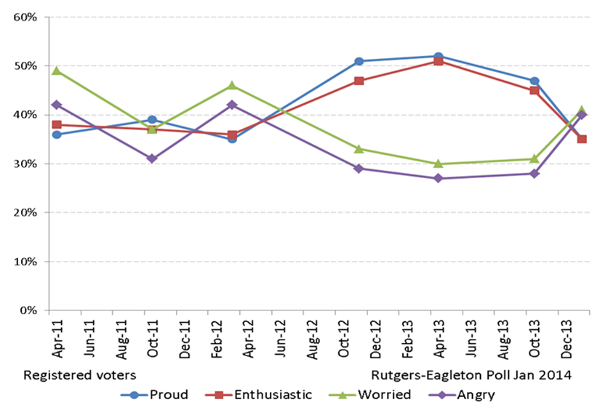 While partisan perceptions and likability are constantly in flux for politicians, the negative turn Christie’s ratings have taken is particularly consequential for him. His image as a bipartisan no-nonsense get-it-done guy, and his straightforward style of leadership were the hallmarks of his re-election campaign and undoubtedly were expected to be the foundation upon which his rumored presidential run was to be built. While it is too early to know how much Bridgegate and other allegations in its wake will affect Christie’s ability to run for president in 2016, the scandal has significantly damaged these two key assets, washing away the post-Sandy political capital that drove him to national stardom. Whether Christie is telling the truth or not – and whether he had any part in these scandals – the allegations have already damaged him where it hurts him the most. Will the damage persist? Only time – and the polls – will tell.