Fatigued by Trump-era national politics, New Jerseyans have mostly tuned out of a crucial gubernatorial election

Fatigued by Trump-era national politics, New Jerseyans have mostly tuned out of a crucial gubernatorial election

Voters in the Garden State go to the polls Tuesday to elect a successor for Governor Christie, now the most unpopular chief executive in New Jersey’s history. Ashley Koning writes that the Democratic candidate, Phil Murphy, has a comfortable lead over Republican (and Lieutenant Governor) Kim Guadagno in an election which despite having huge repercussions for the state in the years to come, is largely being ignored by New Jerseyans.

As one of two states that hold their elections for governor in the “off year” immediately following a presidential ballot, New Jersey has on occasion been portrayed as a barometer for the national mood and a bellwether for the approaching midterms.  This depiction has been stoked by the election of governors who have been of the opposite party as a first term president in the past few decades: Christine Todd Whitman in 1993 (President Bill Clinton), Jim McGreevy in 2001 (President George W. Bush), and Chris Christie in 2009 (President Barack Obama).  In retrospect, Whitman’s and Christie’s victories were especially viewed as a foreshadowing of ideological shifts, given that both wins were followed by Republican gains in Congress in the midterms the next year.

In reality, however, the link between gubernatorial races and presidential elections are not terribly strong, and the off-year timing and singularity of New Jersey’s (and Virginia’s) race makes it difficult to analyze any greater, national implications.  New Jersey, moreover, is unique when it comes to its executive office: though typically considered a “blue state” nowadays, its governorship has often switched back and forth between the two parties no matter the national context.  The New Jersey race is also nowhere near as close as the one in Virginia according to polling in each state and thus not soaking up as much national attention or resources as its counterpart; Democrat Phil Murphy in New Jersey has had a comfortable double digit lead over the Republican Kim Guadagno from the start, compared to just a few points difference in the most recent polling for Virginia.  Nevertheless, New Jersey’s race this year is an important election with both statewide and national implications that people should pay attention to; it’s too bad that New Jerseyans seem to have largely turned away.

Who are the candidates?

A Goldman Sachs millionaire and a tough-talking Republican: at first glance, the 2017 race for governor looks a lot like a repeat of 2009, when former Goldman Sachs executive Democrat Jon Corzine lost out on a second term to tell-it-like-it-is rising star Republican Chris Christie.  This time around, the candidates’ names have changed, but some of the candidates’ characteristics remain the same.

Phil Murphy, much like Corzine, was a Goldman Sachs man for the majority of his career.  His Wall Street ties and own literal fortune have been drawbacks since the start, not only because of concerns over an allegiance to “big banks” or possibly being out of touch with the working and middle class but also because of how much he could be viewed as a reincarnation of the deeply unpopular Corzine.  Yet these similarities did not stop Murphy from knocking out his stiffest competition early on in the game and becoming the Democratic nominee. 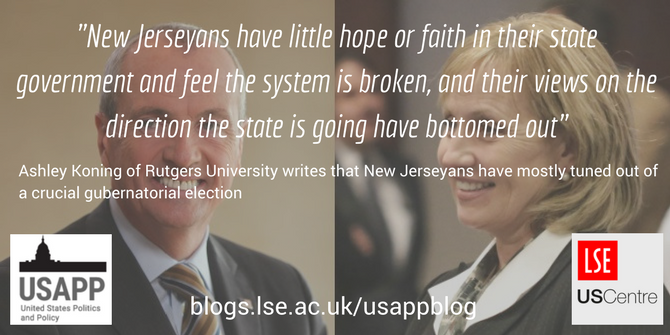 Murphy began campaigning for the Democratic ticket over a year ago (though he started to lay groundwork years before that), becoming the first candidate to officially throw his hat in the ring in May 2016.  Never having held elected office before, Murphy’s only political experience stemmed from being finance chairman for the Democratic National Committee and then the US Ambassador to Germany during the Obama administration from 2009 to 2013.  He thus billed himself as a political “outsider” – both a benefit and a liability – who owed nothing to the establishment and who was ready to make the tough decisions in Trenton.  Advantaged by his own wealth, Murphy poured his own money into campaign ads as early as 2016.  He then managed to coalesce the state party bosses around him and clinch the Democratic nomination this past June.  Murphy has had a comfortable double-digit lead in the general ever since, bringing in Democratic superstars like Bill Clinton, Hillary Clinton, Joe Biden, and Barack Obama (as well as Jon Bon Jovi) to campaign alongside him in recent weeks to make sure the Democratic base turns out to vote.  Yet for all the money, endless campaigning, and political celebrities, Murphy’s recognition among New Jersey voters remains lackluster: around Labor Day, four in ten voters still did not know who he was, and another quarter had no opinion on him.  Moments away from Election Day, Murphy’s numbers are not that much better, with a third still not sure about him enough to provide an opinion and the rest split on how they feel.

And then there’s Republican candidate Lieutenant Governor Kim Guadagno – the woman who has already been (acting) governor.  Guadagno was a former sheriff and prosecutor in the state and, as Christie’s running mate, became the first lieutenant governor of New Jersey in 2009 (the position did not previously exist).  As part of her lieutenant governor duties, Guadagno has taken over state business on countless occasions throughout the past eight years when Christie has been away (over 500 days in his second term, alone) – whether due to his Republican Governor’s Association chairmanship or his 2016 presidential run.  It seemed appropriate, then, for her to be next in line for the governorship when Christie reached his two-term limit, and at the height of Christie’s popularity in 2013, a future win for Guadagno seemed almost guaranteed.  But Christie’s shadowed loomed too large over Guadagno – both in the best of times and in his worst.  Despite her eight years in Trenton alongside – and in place of – him, Guadagno mostly stayed behind the scenes and out of the public eye.  This has been apparent in polling on Guadagno: less than half knew of her or had an opinion of her by Labor Day, and even now, four in 10 New Jerseyans still do not recognize her enough to express an opinion.

Guadagno did not announce her intention to run for governor until January 2017.  The primary gave her more of a challenge than expected, but she pulled out a victory, only to start off in the general election against Murphy as the underdog.  While Murphy’s Goldman Sachs past and green thumb in politics have disadvantaged him, Guadagno has been inevitably and continually damaged by her boss – the governor with the lowest approval rating ever on record in New Jersey – both in terms of reaching out to voters across the aisle and with her own base.  This has forced Guadagno into a difficult balancing act of dutifully serving in her current job yet making it clear she does not stand with Christie’s choices and actions (many of which, others argue, she backed during his tenure).  But there is no love lost between governor and lieutenant governor: Guadagno has noticeably distanced herself from Christie during these last few months of campaigning, and Christie has not been on the campaign trail for his second in command.

In fact, Guadagno has not had much Republican support on the campaign trail at all, whether physically or financially – not even a tweet from President Trump, who has been much more hands-on in Virginia.  And this is perhaps why Guadagno, known throughout her career as a more moderate Republican with progressive stances, has taken a hard right turn in recent weeks, going after Murphy for his desire to make New Jersey a sanctuary state with a blistering – as some have labeled it, “Willie Horton-esque” – attack ad about illegal immigration.  Whether or not this helps Guadagno’s numbers problem – registered Republicans are severely outnumbered by Democrats in the state – in terms of winning remains to be seen, though we won’t have to wait much longer.  What is certain for Guadagno is, she’s caught in a precarious situation between two factions of the Republican Party and two wildly unpopular figureheads – a scenario she couldn’t have imagined just a few years ago.

The campaign thus far has been devoid of much substantive policy discussion despite the serious issues facing the Garden State – rising taxes, crumbling transportation and infrastructure, a broken pension system, and the need for education reform, just to name a few.  The state is in bad financial shape: its credit rating has suffered 11 downgrades, making it the second worst financially, behind Illinois.  New Jersey has the highest property taxes in the country and the lowest funding capabilities for its pension system.  New Jersey commuters pay some of the highest fares, and its residents pay among the highest rents in the country.  Yet each opponent has presented sound bites rather than concrete plans about some very real problems the state is facing.  Any moves made by the next governor will have serious consequences for New Jersey and the surrounding tri-state area.

The repercussions of the election will not be lost on the country, either.  Whoever becomes governor will have a big decision to make about US Senator Robert Menendez – the New Jersey senior senator currently undergoing a trial for corruption charges.  As the jury begins to deliberate, the big question of Menendez’s future looms not just over the Garden State but also over the entire US Congress.  If he is found guilty and either resigns or gets expelled, Menendez’s open seat could prove crucial on important votes in the Senate on issues like tax reform and healthcare.  The power to fill that seat goes to the governor, making Democrats all the more hopeful for a Murphy win in case a favorable verdict for Menendez is not returned.

But even with such high stakes riding on this race, New Jerseyans are simply not interested.  Call it fatigue from the 2016 presidential election and its aftermath, a disdain for the state’s current leadership that has bore an apathy for state politics, or a disgust for the increasing hyper partisanship of politics altogether, but the 2017 gubernatorial race has been a low interest, low energy election among voters in the Garden State.  New Jerseyans have little hope or faith in their state government and feel the system is broken, and their views on the direction the state is going have – much like Christie’s numbers – bottomed out.  It’s no wonder that voters have been less familiar with their candidates throughout this election cycle than the last time the governor’s race lacked an incumbent in 2005.  And it’s no wonder that the media predict a new all-time low for voter turnout in the Garden State on Election Day this year, which has been on a downward spiral for state and local elections since 2001.

While a win for Murphy looks almost certain – he currently leads Guadagno by 14 points in the Real Clear Politics average as of this writing – New Jerseyans’ views on the state’s future, regardless of who is elected, do not.