In an increasingly mobile society, there may still be incentives for remaining close to family members, especially for those with young children. Janice Compton and Robert A. Pollak take a close look at the effects on the labor supply – how many hours they are willing to work – of young mothers of living close to their mothers or mothers-in-law. They find that married women who live closer to their children’s grandmothers are more likely to be willing and able to work, and work longer hours. They argue that this effect is directly related to the greater availability of childcare that grandparents provide for married mothers with young children.

Economic theory makes no prediction about the effect on labor supply (the probability of working in the market and the number of hours worked per week) of living close to one’s mother or mother-in-law. Indeed, economic theory is generally silent about the geography of the family. If there are differences in labor supply associated with proximity, those differences might reflect “selection,” that is, underlying differences (e.g., in race or education) between adults who live near their parents and those who do not. 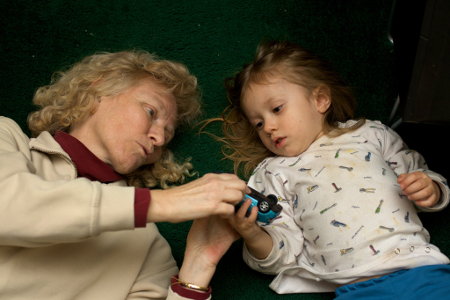 For women with young children, having mothers or mothers-in-law nearby might have a positive effect on labor supply because the grandparents might help with childcare. On the other hand, it might have a negative effect on labor supply because the grandparents themselves may require care, and caregiving responsibilities often fall to daughters and daughters-in-law who live nearby. To discover which effect predominates requires empirical analysis.

Using U.S. data, we find that for married women with young children, living close to mothers or mothers-in-law is associated with substantially-higher labor supply. We argue that there is clear and convincing evidence that this higher labor supply is a response to the greater availability of childcare.

Other explanations of the association between proximity and labor supply (e.g., better job-search networks) would imply effects for men, for unmarried women, and for married women without young children, but we do not observe these effects. Empirically, the “selection” argument (i.e., those who live close to their mother or mother-in-law are systematically different than those who do not) works in the opposite direction. That is, the observable characteristics of individuals who live near their mother or mother-in-law are associated with lower labor supply (e.g. lower education, younger, lower spousal income).

Using Census data, we can partially address the absence of a natural experiment or an instrumental variable. The ideal natural experiment would randomly assign couples to locations. We argue that our sample of “military wives” — civilian women with husbands serving in the U.S. military — approximates such an experiment. Using the military wives, we find labor supply effects that are substantial but are weaker than the effects for the general population. This is perhaps because, as a consequence of the approximate random assignment, compared with the general population; those in the military who live in their birth states are likely to be further from their mothers and mothers-in-law.

This article is based on the paper “Family Proximity, Childcare, and Women’s Labor Force Attachment,” in the January 2014 issue of the Journal of Urban Economics.

Robert A. Pollak – Washington University in St. Louis
Robert A. Pollak is the Hernreich Distinguished Professor of Economics at Washington University in St. Louis. His current research interests include the economics of the family and demography. Pollak is the author of numerous articles in professional journals and of three books: From Parent to Child: Intrahousehold Allocations and Intergenerational Relations in the United States (1995, with J. Behrman and P. Taubman), Demand System Specification and Estimation (1992, with T. Wales), and The Theory of the Cost-of-Living Index (1989).