Over the past decade, the US has carried out hundreds of strikes against terrorist targets using unmanned aerial vehicles, known as drones. The use of these drones has accelerated under the Obama Administration, which has led to growing protests over civilian casualties stemming from their operations. Natalie Allen argues that drones are in fact one of the most effective forms of warfare to prevent civilian casualties, and that whether the war itself is justified is an entirely different matter. She writes that the debate over the use of drones needs to move on from the technology used, towards how the ‘War on Terror’ is being conducted as a whole.

Drones have been a cornerstone of President Obama’s counterterrorism strategy. In Pakistan alone, it is estimated that there have been 321 drone strikes in the five years since Obama took office, compared to the 47 strikes under George W. Bush. The program has been highly secretive; while casualty estimates range from around 2,800 to 4,500 it is nearly impossible to know the actual figures as government officials rarely confirm or deny such actions, nor do they regularly provide information about the numbers of civilian or combatants killed. Domestic protests over the use of drones have become increasingly vocal, in addition to traditional demonstrations in Washington; activists have identified and protested drone manufacturers, research/training centers, and bases. While the sentiment behind such action is commendable, the focus on the actual technology distracts from the real issue at hand: the US’s policy of targeted killings.

Drones, or unmanned aerial vehicles (UAVs) as they are officially known, are aircraft that are controlled remotely, rather than by an onboard pilot. Without having to accommodate for the needs and limits of a human on board, UAVs can be used in a number of ways that would be nearly impossible for traditional aircraft, such as 18 hour missions. While drones are still controlled by humans, the idea that pilots are not in the planes and therefore not in any physical danger seems to be a point of fixation for many, who have denounced their use as “PlayStation warfare.” The implication here is that because drone pilots are not physically present in the combat zone they can be desensitized to the act of killing, pulling the trigger without a second thought as though they were playing a video game. This thought process shows a profound misunderstanding of how drones function and the role of their pilots. 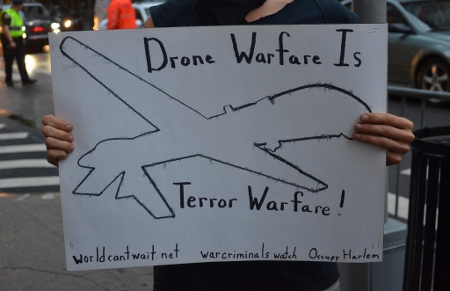 While UAV pilots are not in any physical danger while flying missions, they are subject to many of the same stresses as other piloting positions and many of the same psychological issues as other military personnel. Operating a drone is nothing like playing a video game, while most of the information does come in through a screen, the same could be said of most airplanes used in the military today. UAV operators may even be more deeply affected by what happens on the ground than standard pilots because they must often watch the aftermath of an attack, rather than focusing on safely flying away from a battlefield after discharging their weapons. It is actually this ability to fly low without regard for a pilot’s safety that makes drones a particularly valuable weapon to those concerned with civilian casualties.

The United States and its allies have become particularly risk averse in recent interventions and campaigns, opting for high level bombing to avoid casualties. Unfortunately, this can complicate identification and targeting, which may result in increased collateral damage on the ground. UAVs are a simple solution for risk-averse nations; they allow pilots to fly low enough to accurately identify targets, direct the missiles they fire to their intended mark, and, ideally, away from civilians. While drones are most commonly criticized for civilian casualties, they are actually a highly discriminate type of violence. 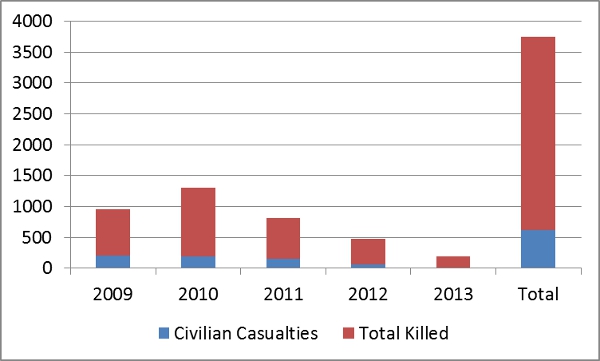 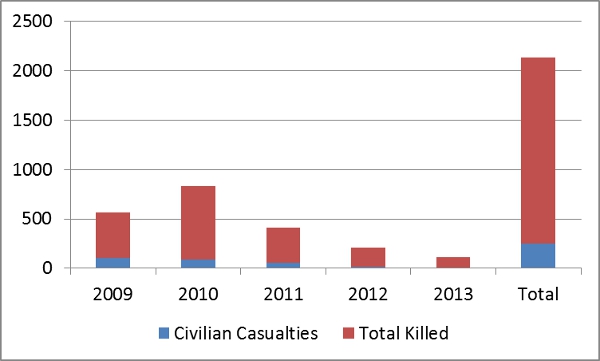 Figures 1 and 2 show the number of civilian deaths from drone strikes based on counts by the Bureau of Investigative Journalism. You can see that even using the high count, the civilian drone death rate is 20 percent, while the low count is 13 percent. To put that in perspective, under the US occupation (2003-2011), Iraq Body Count recorded 118,774 civilian deaths; compared to the total 186,000 estimated deaths, the civilian death rate is around 64 percent. Some would say that it is not fair to compare civilian deaths in war to the victims of CIA drone strikes in Pakistan, noting that no civilians would be killed if the U.S. was not conducting a campaign outside of a traditional conflict setting. This is fair criticism and precisely why the debate should focus on the U.S. policy of targeted killings, rather than on the use of UAVs. Drones are perhaps the best form of warfare to prevent civilian casualties, whether the war itself is justified, is an entirely different matter.

Drones may be used to carry out targeted killings as a long-term counterterror strategy, but the use of targeted killing has a lengthy history. UAVs have merely facilitated the use of this strategy on a wider scale; a drone strike is a fairly low cost and low risk enterprise compared to the work it takes to orchestrate a manned operation. The so-called “war on terror” in the Middle East and counterterrorism more broadly has raised a number of questions that deserve scrutiny and a robust public debate: the unrestricted power of the executive to determine who is an enemy and legitimate target, the extent of the battlefield, the role of due process, the militarization of the CIA etc. However, these nuanced questions are often buried in emotional and ill-informed tirades about the evils of drone technology.

History shows that even military technology that is controversial in its early days, such as submarines, still tends to be widely used and adopted in the long run. Drones are no different. UAVs are an important advancement with the potential to greatly restrict military and civilian casualties, and it is highly unlikely that they will be phased out in the near future. Thus it is important that the conversation moves beyond the current discomfort with technology, towards discussions over the broader strategies used.

Natalie Allen – LSE Public Policy Group
Natalie Allen is currently pursuing her MSc in Conflict Studies at the LSE, focusing specifically on terrorism and state building, and is also Assistant Editor of USAPP. A 2013 graduate of Vassar College, prior to working for PPG, Natalie worked at the Consortium for Gender, Security, and Human Rights in Boston, Massachusetts.