In the last decade the accumulation of wealth at the top has increased dramatically. Thomas Goda looks at the impact of this on-going concentration of wealth on financial stability. He argues that this concentration was a root cause of the recent financial crisis, and that it still poses a threat to the financial system because sufficient investible securities are not available to satisfy the increasing global demand for financial assets. He writes that to solve this problem wealth has to be redistributed.

In the wake of the 2008 financial crisis, research on the impact of inequality on the stability of the economic system has returned to the centre of attention of academics and the public. In recent years, various studies have found that the contemporary increase of inequality within many countries has reduced economic growth and contributed to the financial crisis of 2008.

The current debate concentrates on the effects of the distribution of income across different groups of people, but with regard to financial instability the absolute accumulation of wealth at the top is at least as important. Rich individuals need to store their increasing wealth somehow, and the subsequent increase in the concentration of wealth thus leads to an increasing demand for safe investible securities.

The supply of debt securities has limitations however. The potential growth of the government and municipal bond market is constrained by the actual amount of public debt, while the agency bond market (made up of bonds from U.S federal government sponsored agencies such as Fannie Mae and Freddie Mac) is mainly constrained by the size of the prime mortgage market, and the corporate bond market by long-term investment opportunities of companies. If not enough of these securities are available, financial institutions will create new securities that provide higher yields but might not be as safe as they ought to be.

Wealth concentration and the subprime crisis

This is exactly what happened prior to the outbreak of the subprime crisis. Between 2002 and 2007 the global wealth of individuals with a net worth of at least US$1 million (primary residency excluded) – so called high net worth individuals (HNWIs) – increased dramatically and even more so the wealth holdings of billionaires (Figure 1).

While the amount of traditional debt securities also increased during this period it could not hold up with the increase in investor demand. The result was that the yields of US investment grade bonds dropped to historically low levels (Figure 2). While Treasury yields mainly were depressed due to the increasing demand from foreign governments (especially from China), corporate, agency and municipal bond yields were depressed by individual and institutional investors. A significant part of this private investor demand came from HNWIs who increased their US bond holdings from US$2.1 trillion to US$2.9 trillion between mid-2004 and mid-2007.

Figure 2: Long term real interest rates in the US (in %) 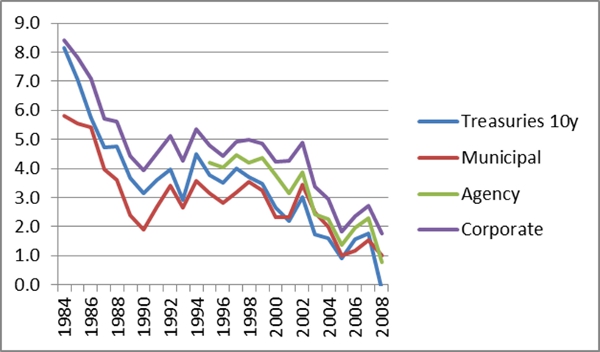 The low yield for traditional debt securities, in turn, led to a search for alternative debt securities with a higher yield. As a result, financial institutions were pressured to issue more and more collateralized debt obligations (CDOs). While HNWIs were not involved directly in this market (due to its complexity), they were involved indirectly via hedge funds, who were the main investor in this new fast-growing market (Figure 3). 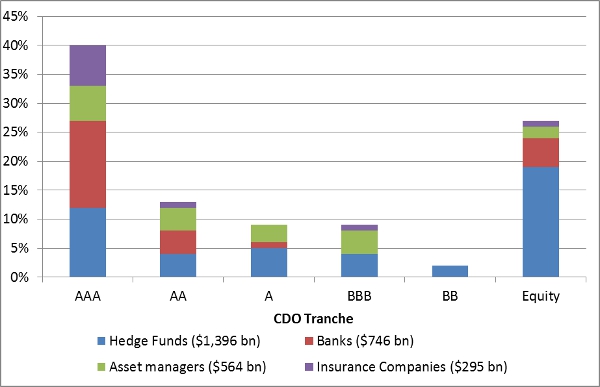 The reason why CDOs were especially attractive for hedge funds was that they received more and more funds from institutional investors and HNWIs and that they at the same time needed to generate above average yields. To achieve these yields hedge funds relied on leverage. CDOs were the perfect solution for hedge funds because (i) their risky equity tranches provided high returns, and (ii) their investment grade tranches gave a decent return that could be used as collateral to get access to credit.

While hedge funds have been the conduit through which demand pressure was transmitted, the ultimate source of that pressure was their clients, and chief amongst them were HNWIs (between 2002 and 2007 HNWIs increased their hedge fund investment from US$500 billion to US$1.1 trillion). Rising wealth concentration thus was a root cause of the crisis as the increasing asset demand from the superrich is crucial to understanding why the CDO market was able to grow to a size sufficiently large to wreak general havoc when it collapsed in August 2007.

Is wealth concentration still a threat for the stability of the financial system?

The financial crisis led to significant losses of wealth holdings at the top, with high net worth individuals losing around 20 percent of their holdings in 2008. Billionaires were even more affected, losing around 45 percent. However, both HNWIs and billionaires recovered very quickly from their losses, meaning that already in 2011 the net wealth of these two groups was higher than before the outbreak of the crisis, as Figure 1 above illustrates.

The current concentration of wealth at the top is likely unprecedented in history. This can be seen at the example of John D. Rockefeller, the business magnate of the late 19th and early 20th century. It is often stated that Rockefeller was the richest man ever alive in relative terms. However, his peak wealth holdings in 1937 (US$ 22 billion in 2012 dollars) were nearly three times lower than Bill Gates’ absolute wealth holdings at the end of 2012 (US$ 62 billion). Moreover, it is important to note that in the past very rich people could only be found in very few countries, while in 2012 developing countries hosted around 40 percent of the global billionaire population.

The on-going global concentration of wealth at the top is an important reason why there is still a shortage of safe financial investment opportunities, leading to very low global yields and the recurrence of the ‘search for yield’ phenomenon. Another important reason is that capital investment in the real sector has diminished significantly since the 1970s (in 2012 global gross fixed capital formation as percentage of GDP was nearly 4 percentage points lower than in 1979), as the marginal profitability of real capital investment has been relatively low.

To ensure that the financial system does not again endogenously overexpose itself to systemic risk, it therefore is necessary to redistribute some of the existing wealth from the very top to the very bottom – via more progressive taxation and social programs. The outcome of such a policy would be twofold. Firstly, some of the existing demand pressure from the rich would be relieved. Secondly, low income households would consume more, leading to an increase in profitable long-term investment opportunities in the real sector and thus less need to search for new financial assets. Unfortunately, this solution is not high on the global policy agenda at the moment. Instead, there is a pressure on governments to decrease taxes and to reduce social spending.

An in-depth discussion of the main arguments of this article can be found in the current issue of the Cambridge Journal of Economics and in a recent published CIEF Working Paper.