Professional campaigners are socially removed from low-income communities and taught to ignore them at election time, perpetuating political inequalities

Professional campaigners are socially removed from low-income communities and taught to ignore them at election time, perpetuating political inequalities

Voter turnout has fallen as income inequality has risen, in the US and other advanced democracies. Daniel Laurison considers this phenomenon an effect of how political campaigns are organised, and how campaign staff are recruited. Based on evidence from elections in the US, he explains why campaigns are reluctant to focus efforts on voters from disadvantaged communities.

One reason people may not vote is that they feel disconnected from the political process. People are more likely to participate in politics if they believe it is something that they are legitimately entitled to do – in other words, if they think of it as something for ‘people like me’.  People can be connected to electoral politics by being asked directly to participate, or by knowing someone who is involved.  However, changes in the organisation of politics have made both of these kinds of political connection less likely for poorer people. 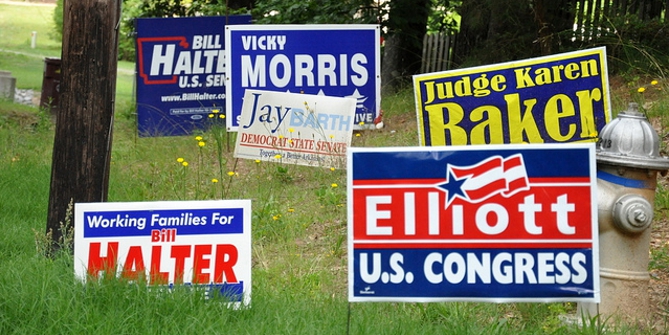 In the era of machine politics, a successful political operative was someone who could reliably deliver a particular block of voters to a candidate.  This model had many problems, but there was at least some regular contact between voters – of many backgrounds and class positions – and political professionals.  In the contemporary era, we have ‘devolved’ or ‘networked’ parties, where candidate-selection and campaign organisation happen largely outside the formal party.  In this system, communication between the political field and those outside it is much more uni-directional, delivered by television, the internet, radio and mail, rather than (primarily) through in-person contact.  Along with these changes, the business of politics has expanded: thousands of people make their living working on or providing services to political campaigns.

I study this world of American national-level full-time campaign operatives and consultants (colloquially, at least in Washington DC, called ‘politicos’).  I have volunteered for campaigns, collected data on the backgrounds and career trajectories of over 4000 of these politicos, and interviewed 57 of them.

Politicos shape the messages and central issues of campaigns, and decide which potential voters their campaigns will attempt to influence.  Their work thus affects whether and how people vote, as well as what they think of when they think about campaigns, politicians and politics.

My research shows that these national-level politicos, just like the politicians they work with, are disproportionately from better-off families and ‘ivy league’ colleges and universities in the US.  This initial bias is perpetuated by campaign hiring that is almost entirely informal and connection-based: all but three of the 57 people I interviewed relied on family, school or community ties to secure their first political positions.  The closed pipeline into political work means that it’s unlikely that many lower-income Americans know anyone directly involved in national politics.  As inequality and income-based residential segregation increase, the social distance between people who run campaigns and the voters with whom they communicate continues to grow.

This might not matter much if campaigns were consistently reaching out to lower-income potential voters.  But, by and large, they are not.

Why not? In essence, it’s because most politicos don’t think it will help them win elections. There is a widespread and persistent belief among politicos that it is not worth the time and effort to attempt to mobilise eligible citizens who have never or rarely voted; instead, they generally focus their ‘get out the vote’ efforts on encouraging semi-reliable voters to get to the polls.  However, a series of field experiments by Michelson and Bedolla found that, when neighbours ask neighbours to vote, turnout—even among so-called ‘low-propensity voters’—increases substantially.

So why don’t most politicos think targeting these potential voters can help them?  They learn their craft through a quasi-apprenticeship system, working their way up through campaign hierarchies, election cycle after election cycle.  Most beliefs about effective campaigning are acquired through the experience of campaigns, passed down from one generation of politicos to the next.  But electoral outcomes are the result of any number of factors, many of which are outside a campaign’s control, and it is difficult to parse the effect of any one campaign decision on how or whether people end up voting.  So the lessons that campaigners learn from election outcomes are often necessarily anecdotal and partial.

Campaigners must always seek new and better ways to increase their chances of winning, but in the course of my research they consistently told me that too much innovation could threaten a career: no-one wants to be seen by other politicos as being naïve or taking unwarranted risks.  Since most of their peers think targeting unlikely voters is a waste of time, few politicos are willing to champion such an approach.  Although books like The Victory Lab report new partnerships between scholars and data-oriented politicos, the analyses undertaken have mostly assessed how voters are targeted, rather than questioning which potential voters are included in the targeting.

None of this is to say that campaigns never influence or mobilise voters, or that the choices made by politicos running campaigns are solely responsible for declining participation.

Campaigns are a key link between politics and potential voters.  They pour time and money into ‘get out the vote’ efforts, and many people who might otherwise have stayed home are in the end brought to the polls.  But, when the people who run campaigns are socially removed from the disadvantaged and don’t believe that non-voters can be brought into the democratic fold, it’s not difficult to see one important reason why low-income voters are not connected to electoral politics.  This plays a part in explaining declining turnout and political inequality, as well as in bringing about the policy consequences that stem from poorer people’s absence from the political process.

Note: This post was originally published on the Speri Comment blog from the University of Sheffield, and the Democratic Audit of the UK blog.

Daniel Laurison – LSE Sociology
Daniel Laurison is a Research Fellow in the Department of Sociology at the London School of Economics.  His research interests focus on class and class identity, inequality and political participation.

Flora Parkin reviews Planet On Fire: A Manifesto for the Age of Environmental Breakdown by Mathew Lawrence and Laurie Laybourn-Langton