A key trend in immigration politics and policy over the last decade in the U.S. has been the devolution of policy formulation, implementation, and enforcement to local state actors. Ranging from the 287(g) program that gives local law enforcement federal enforcement powers to anti-immigrant municipal laws passed in cities such as Hazleton, Pennsylvania, these trends have posed significant challenges to the long standing position of the federal government as the sole political actor charged with governing immigration concerns. But local governments are not the only actors engaged in the devolution of immigration policy; immigrant hometown associations, immigrant advocacy organizations, and even foreign consulates are playing more prominent roles. In the case of employment, particularly workplace immigration enforcement, labor unions in the U.S. are emerging as key actors shaping the implementation of federal immigration policy. 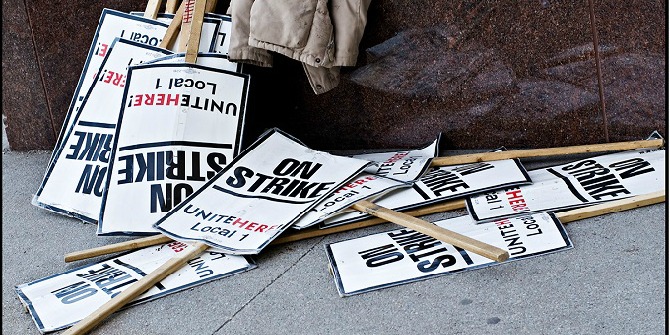 In the U.S., workplaces have been historically key targets of federal immigration enforcement activities. In recent years, workplace enforcement has ranged from the Bush Administration’s high-profile large-scale workplace raids to the Obama administration’s quieter “silent raids” examining company documents that verify immigrant workers’ eligibility status. The ramifications of worksite immigration enforcement are complex, primarily because workplaces confer rights to undocumented immigrants as workers as well as criminalize their presence in the U.S. The interplay between immigrants’ legal status and their rights under U.S. labor and employment laws constitutes the workplace as a territorial site at which these rights and restrictions intersect and often collide. Worksite immigration enforcement lays these contradictions bare.

The legal foundation for workplace enforcement rests with the 1986 Immigration Reform and Control Act (IRCA), which makes it unlawful for an employer to knowingly employ an undocumented immigrant. Through IRCA, workplaces became sites where illegal activity—the employment of undocumented immigrants—is produced and carried out. Unlike the border, however, interior enforcement sites are superimposed onto pre-existing social realms, filled with rights, rules, and norms separate and distinct from immigration law. Workers, regardless of documentation status, enjoy the rights and protections afforded under federal labor and employment law, such as minimum wage, overtime, occupational health and safety, and the right to organize. Workplace immigration enforcement demonstrates the clash of illegality and legal rights for the same individuals—undocumented workers. The lines between illegality-as-outsiders and rights-as-insiders are thus blurred as the worksite simultaneously confers inclusion and engenders exclusion.

In workplace immigration enforcement, unions occupy a unique position because their role as a legally recognized representative agent of workers provides them with a compelling claim to the local bargaining process of policy implementation. The union representing hotel workers in the U.S. has made just such a claim. In 2006, Unite Here Local 1 in Chicago and Local 11 in Los Angeles won unprecedented protections for their immigrant workforces in their hotel contracts, providing immigrant workers with a transparent process of response, adjudication, and resolution in matters connected to their documentation status involving both the federal government and the employer.

These provisions do not preempt federal law, but rather exploit the gaps in the implementation of federal immigration law by governing the employer’s actions in three immigration-related areas: workplace immigration enforcement, re-verification of status, and Social Security no-match letters (written notices issued by the Social Security Administration to an employer indicating that the name or Social Security number reported for an employee does not “match” a name or number in the Administration’s records). For example, the Unite Here contracts stipulate that the employer do no more than is legally required in the event of a federal enforcement operation, such as refusing admittance of federal agents who do not possess warrants. Notably, the employer must contact the union when it receives notification from a government agency regarding an immigration-related case. This provision guarantees a worker the option of union representation when a federal immigration inquiry is initiated at the workplace.

Taken together, these contract provisions establish legal safeguards that prohibit an employer from using federal immigration inquiries as cause for firing, intimidation, or retaliation. Additional provisions provide immigrant workers with protections beyond the guarantees of federal law: stronger non-discrimination commitments, seniority safeguards, right to converse in a language other than English, unpaid leave for immigration-related proceedings, and a paid holiday to attend one’s own citizenship ceremony.

For undocumented immigrant workers, the worksite produces both illegality and legal protections—the former under immigration law, the latter under labor and employment law. Unions, as nonstate actors and legal representatives of immigrant workers at the workplace, negotiate the uncertain and often conflicting intersection of these two legal domains. In the case of the hotel union, its contracts defend existing rights and innovate new protections for immigrant workers, creating enclaves of rights that are geographically and temporally bound. These protections inhere in place because worker rights (conferred by federal law) and rights attained through social membership (union representation) are triggered, actualized, and defended at the workplace. The paradox is these enclaves of rights contribute to the highly uneven landscape of security for immigrants in the U.S. For policymakers, they generate empirical cases through which to evaluate the on-the-ground negotiation of competing legal claims and a blueprint for how to resolve these conflicts through policy.

This article is based on the paper “Enclaves of rights: Workplace enforcement, union contracts, and the uneven regulatory geography of immigration policy,” which appeared Annals of the Association of American Geographers.