A common refrain is that there is “too much money in politics”, with many arguing for the public funding of political campaigns. But what are the effects of this kind of public finding on electoral and legislative behavior? Using evidence from U.S. state legislative elections over the past four decades, Andrew B. Hall finds that public funding for campaigns actually increases political polarization by reducing the influence of interest groups, which tend to be more moderate than individuals in the way that they donate.

In his 1907 State of the Union address, U.S. President Theodore Roosevelt told the nation that “there is a very radical measure which would, I believe, work a substantial improvement in our system of conducting a campaign.”  He was referring to the public funding of political campaigns, a reform that, more than 100 years later, is enjoying resurgent popularity in America.  In addition to the federal government’s funding of presidential elections, fourteen U.S. states now offer some kind of public funding to candidates for state offices, and similar programs have been proposed for the U.S. House and Senate.

By looking at the effects of the public funding of campaigns on electoral and legislative behavior, we can not only evaluate an important policy, but we can learn about the political effects of the design of our electoral institutions and enhance our theoretical understanding of the links between campaign finance, interest groups, and the actions of our legislators.

In recent research, I find that the public funding of state legislative elections deprives incumbents of their financial and electoral advantages but increases legislative polarization.  I present evidence that this increase in polarization stems, at least in part, from the way in which public funding reduces the influence of access-oriented interest groups, donors who prefer more moderate candidates.

To arrive at these results, I take advantage of the staggered implementation of public funding programs in five states: Minnesota and Wisconsin, who implemented programs in the 1970s, and Arizona, Maine, and Connecticut, whose more stringent “clean election programs” are of more recent vintage.  The programs work by providing state funds to legislative candidates who “opt in” and obtain a small number of qualifying donations from individuals to establish their viability. By comparing the way these states have changed after implementing public funding to how all other “control” states have changed over the same time period, I was able to disentangle how public funding affects elections and legislation.

Figure 1 shows my main results, and plots the distribution of state legislative ideal points or “NP Scores” (which show levels of polarization), estimated from roll-call data by Shor and McCarty for “treated” states, those that implement public funding programs, and “control” states, those that do not.  In the top row, we can see how the distribution of ideal points has become more polarized to the left and right after public funding, with fewer legislators in the middle of the spectrum and two “humps” for the two parties.  No such change is seen over the same time period in the control states in the second row. 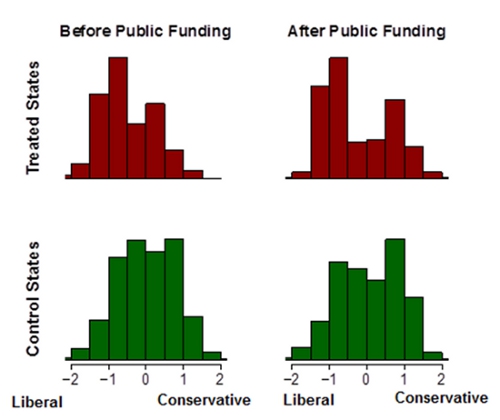 Why does public funding increase polarization?  In my research, I focus on one major explanation, although there may be others as well.  Public funding removes the ability of access-oriented interest groups to target incumbents with their contributions.  As Adam Bonica has shown, these groups tend to be more moderate than individuals in their donation behavior.

Figure 2 confirms this relationship for state legislatures.  The plots show the average amount of money donated to candidates from access-oriented interest groups (in the first plot) and individuals (in the second plot) across candidate NP Scores.  The first plot shows that access groups display a strong preference for candidates with ideological scores in the middle of the spectrum; individuals, on the other hand, display no such preference, as the second plot shows. 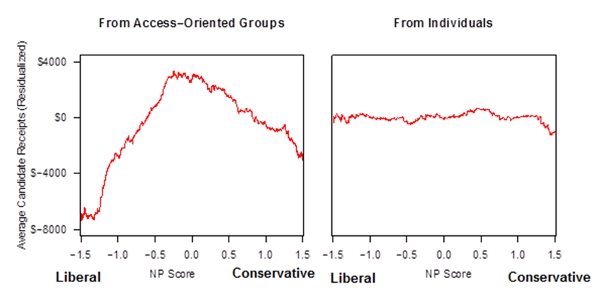 Note: The left panel presents a kernel smoother relating candidate roll-call ideology (NP score) to residualized total contributions from access-oriented groups (de-meaned by state and party). The right panel presents the same for residualized total contributions from individuals. Because of sparsity, the graphs exclude the 4.8% of observations with NP scores less than -1.5 or greater than 1.5.

This dynamic can be seen clearly if we zoom in on Connecticut’s public funding program.  Figure 3 plots the “ideological portfolios” of state legislative candidates before and after public funding in Connecticut, using a technique described in the paper. 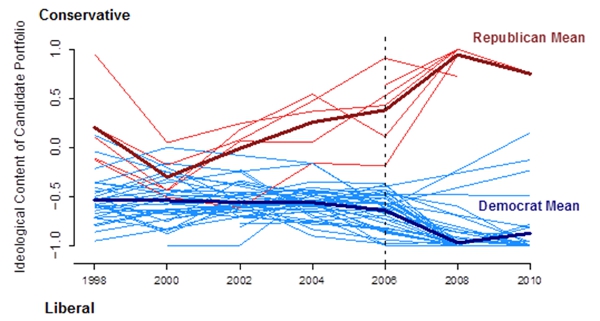 Public funding programs diminish the influence of these moderate interest groups, who are free only to contribute to candidates who do not “opt in” to public funding.  While opt-in rates vary widely across states and years, they are often high enough to wipe out interest group contributions, leaving candidates to cater to individual voters and the small number of individual donors they must woo in order to qualify for public funds.

The link I have shown between campaign finance reforms that limit interest group donation behavior and polarization is consistent with other research on the topic.  In a comprehensive study of other types of campaign finance reform, Michael Barber has shown the same exact pattern of polarizing effects, as have Michael Miller and Seth Masket in their early study of public funding (see discussion here and here).

What do we make of these findings? From a policy perspective, the results require cautious interpretation.  Although public funding increases legislative polarization, it might improve many other features of the political system.  Perhaps the best evidence for many of these benefits is presented in Michael Miller’s comprehensive study of the subject, Subsidizing Democracy.  Among other things, the book shows that publicly funded legislators have more time to dedicate to useful activities, rather than to fundraising.  Voters, too, seem to become more engaged after public funding is put in place.  In addition, it is possible that incumbents in publicly funded legislatures are less beholden to “special interests,” although observing this is difficult if not impossible.

Caution is also required because the policy implications of the findings for public funding depend on opt-in rates.  My estimates are all at the aggregate level to avoid selecting on the strategic decisions of candidates to opt into the program or not.  If opt-in rates fall much—and it appears they are falling in some states, such as in Arizona, where participation went well below 40% in 2012—then it seems likely that the electoral and legislative effects of public funding I have uncovered will diminish as more and more candidates receive more money from interest groups again.

In some respects the broader theoretical implications of the findings are clearer than their policy implications.  Access-oriented groups use campaign contributions to support incumbents.  Their contributions form a large part of incumbents’ financial advantage, and reforms that prevent them from doing so leave incumbents worse off, electorally.  The loss of this financial support also produces more polarized legislators, suggesting that access groups act as a buffer against the polarized preferences of individuals.

What do access-oriented interest groups receive in exchange for these contributions?  Answering this question, something of a “holy grail” for the study of interest groups, is vital to understanding the tradeoffs between a world with publicly financed elections and one in which any group is free to contribute to any candidate.   Whatever the answer to this question, my analysis of public funding programs demonstrates the role that access-oriented groups play in supporting moderate incumbents electorally.

This article is based on the working paper How The Public Funding Of Elections Increases Candidate Polarization.

Andrew B. Hall – Harvard University
Andrew B. Hall is a Ph.D. candidate in the Department of Government at Harvard University and an affiliate of the Institute for Quantitative Social Science. Hall’s work appears in, or is forthcoming in, the American Journal of Political Science, the Journal of Politics, and Legislative Studies Quarterly.  His applied research studies the links between American electoral institutions and the behavior of elected officials in the legislature.  For more information, please see andrewbenjaminhall.com.  You can follow Andrew on Twitter @andrewbhall.