Despite the fact that lobbying is the primary way in which businesses try to impact policy in the United States and that the influence of large corporations is hotly debated, there is little comprehensive evidence on these issues. This is particularly true with respect to business’ behavior over time. In recent research William R. Kerr, William F. Lincoln, and Prachi Mishra study these issues for the first time for all publicly traded firms in the US. They find that lobbying is primarily done by the largest firms who have previously lobbied.  Further, lobbying behavior is highly persistent over time, leading the largest firms to dominate changes in yearly total expenditures. Their findings have significant implications for understanding how lobbying works, the stability of policy, and why some types of legislation are passed and others are not.

Firms have lobbied the US government since its founding but direct evidence on their activities has been partial at best. In 1995 Congress passed the Lobbying Disclosure Act, which was intended to shed light on these activities at the federal level and improve accountability in government. In new research that matches this information to data on publicly traded firms in the US, the authors study how firms’ efforts to affect legislation change over time, focusing on direct lobbying of the federal government. They find that the largest firms dominate lobbying and that once they begin, businesses rarely stop.  Further, when legislation changes those firms that are already involved in lobbying switch their lobbying focus, while smaller firms tend not to respond by starting to lobby.

A number of new facts help explain the context of lobbying. The first is that even amongst publicly traded firms, very few lobby. During our period of study 1998-2006 only 10 percent of them ever lobby.  Lobbying is also done primarily by the largest firms and is highly persistent; the probability that a firm lobbies this year given that it lobbied last year is 92 percent. This high degree of persistence is found across industries as well as firm size categories.  This is potentially surprising, at least from the perspective of the maxim that “a week is a lifetime”. Figure 1 plots the number of total public firms lobbying as well as the number of firms beginning and stopping lobbying activity. The rise in the number of firms lobbying is consistent with the total amount spent on lobbying overall during this time period.  The fact that lobbying is highly persistent and is mainly done by the largest firms, combined together, imply that in a typical year 96 percent of all lobbying expenditures come from firms that previously lobbied. 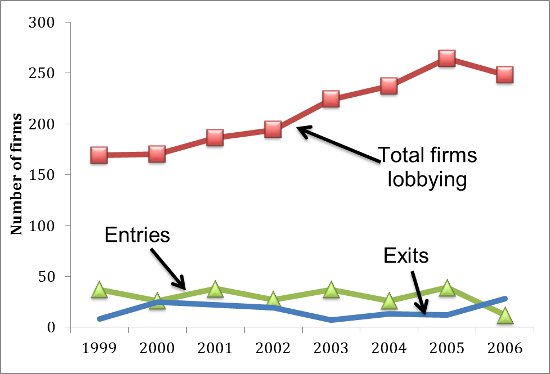 Notes: Figure plots the total number of firms lobbying in each year in the sample as well as aggregate annual entries and exits from lobbying activity.

The explanation for these new facts is found by using the data to test an economic model of lobbying. The results show that difficulties in getting “plugged in” – barriers to entry – can help explain these realities. Setting up a lobbying operation, making contacts, establishing a measure of trust with policy makers, learning the rules of the process and how best to push for one’s agenda are all costs that firms have to bear to begin lobbying. Learning the system in particular provides an incentive to keep lobbying as the payoffs are likely to rise with experience.  Firms also have an incentive to “stay in the game”, so as to not have to pay these costs again when they want to start back up again.

To test these ideas in the case of a particular event, the authors then looked at how firms responded to the expiration of legislation surrounding the H-1B visa for high skilled immigration to the US. The H-1B is the primary visa for temporary immigration for those with college degrees or above.  Legislation that expanded the number of visas that could be allotted in a given year expired in 2004, allowing the cap to drop from 195,000 to its original level of 65,000. The authors find that firms responded strongly to this change but that history mattered. Firms previously lobbying for other issues switched over to lobbying on immigration whereas firms that were not previously involved in lobbying showed little response, even amongst those that would be predicted to be highly affected by the policy change. These results suggest that difficulties getting involved in lobbying played a significant role in shaping how firms responded to events and suggest that current efforts to expand high skilled immigration to the US are likely to be driven primarily by firms that are already lobbying.

The authors’ findings have significant importance for understanding interest group politics. First, the results about lobbying and firm size confirm the idea that big businesses have a disproportionate impact on policy. By “fixing the players in the game” the costs of beginning to lobby also have a profound effect on who lobbies for certain issues and who doesn’t; history matters with respect to lobbying. On the positive side, this can lead to greater stability in policymaking and less policy uncertainty, which has been argued to have positive economic effects. On the negative side, these costs can reduce the range of voices heard in passing legislation and inhibit positive reforms that are not advantageous to the current set of firms lobbying.  The difficulties in lobbying directly may also explain the existence of groups like the US Chamber of Commerce, which lobbies on behalf of business interests more generally. Finally, the persistence in the set of firms lobbying may also explain why certain pieces of legislation passed (they benefitted firms already lobbying) while others did not. This has profound implications for political and specifically legislative strategy.

As lobbying has been growing more and more in the US, these findings are likely to only become more important with time. Further work by the likes of Bertrand, Bombardini, and Trebbi and Blanes i Vidal, Draca, and Fons-Rosen have also deepened our knowledge of the lobbying process and together point a way towards understanding, and perhaps better regulating, efforts by special interest groups to affect policy.

This article is based on the paper, ‘The Dynamics of Firm Lobbying’, in the American Economic Journal: Economic Policy.

William R. Kerr – Harvard Business School
William Kerr is a Professor of Business Administration at Harvard Business School. Bill’s research focuses on entrepreneurship and innovation. One research strand examines the role of immigrant scientists and entrepreneurs in US technology development and commercialization, as well as their impact for the global diffusion of new innovations and ideas. A second research strand considers clusters and entrepreneurship, with special interest in how government policies aid or hinder the entry of new firms, cluster formation, and growth. A final interest area is entrepreneurial finance and angel investments.