For many commentators, the U.S. has turned away from the ideals behind the inscription on New York Harbour’s Statue of Liberty: “Give me your tired, your poor/Your huddled masses yearning to breathe free”, in favour of increasingly stringent immigration policies. Using census data from 19th and early 20th centuries, Andrés Rodríguez-Pose and Viola von Berlepsch find that mass immigration has been integral to U.S. economic development. They write that those places where migrants settled over a century ago are now significantly better off than those that were untouched by migration. By restricting immigration now, the U.S. could be hampering its own future economic growth.

The United States (U.S.) has always been regarded as a country of migrants. Despite the historical ebbs and flows in migration, the perception that the U.S. was built by migrants is in its very DNA. The spirit of the migrant is considered to be at the heart of the ambition, risk-taking, entrepreneurship, and economic dynamism that popularly characterizes U.S. society.

During the period between 1860 and World War I more than 40 million people left Europe to move to the “new world”. The main destination for two thirds of the migrants was North America, and in particular the U.S., where foreign-born population increased from almost 4 million in 1860 to just under 14 million in 1920.

The settlement pattern of newcomers into the country generated a distinct geography of migration. After entering the U.S. generally through the port of New York, most settlers moved to the North and the West of the country. Early immigrants settled largely in rural areas, searching for farmland to cultivate. Later, immigrants were drawn to cities and industrial areas, where by 1910 45 percent of the American population lived. The South remained mostly out of bounds for migrants and inhabited by native-born residents. Native-born were also a large majority in parts of the Mid-West, and in relatively isolated states, such as Maine, New Mexico, or Oregon (Figure 1). 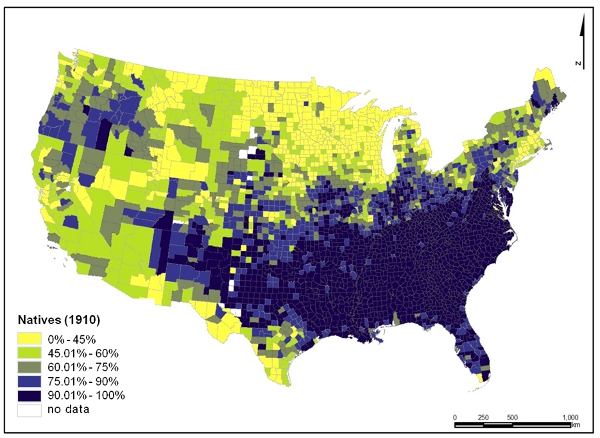 What is the link between these migration patterns and long-term economic development? There is certainly no shortage of studies explaining the positive impact of migration on the overall economic trajectory of the U.S. The long-term impact of mass migration on current disparities in development and on the evolution of these disparities has, however, attracted much less attention and is still poorly understood. Did late 19th and early 20th century migrants leave a legacy in those places where they settled in large numbers? Or was the settlement pattern of migrants irrelevant for ensuing economic development? If that legacy existed, can it be traced up to today? Or did it wane and ultimately disappear as migrants and their descendants assimilated and/or moved to other parts of the country?

In our research, we used census data from 1880, 1900, and 1910 to determine the geographical settlement pattern of migrants arriving in the U.S. at the county level, before analysing the connection between the geographical concentration of migrants and 21st century levels of development – proxied by county-level GDP per capita in 2005.

Most views would tend to dismiss the long-term economic impact of historical migration waves to the U.S. on the basis that, given the superiority of U.S. institutions relative to those of the countries of origin, migrants would slowly adapt to the conditions of the host country and not vice versa. High rates of population mobility within the U.S. – especially relative to Europe – would have further undermined the strength of the institutional constructs brought by migrants. Migrants would thus have been absorbed into the U.S. melting-pot, making any sort of long-term economic legacy of migration difficult to identify, if at all. Nevertheless, few studies have corroborated this view.

Our results, however, clearly contradict the dominant view about the irrelevance of migration for long-term economic performance. Almost a century and a half after the first large migration wave of the late 19th century, those places where migrants settled in large numbers are significantly better off than those that were relatively untouched by migration. Migration is the only factor related to the period of analysis that is still strongly connected to current levels of development. Factors such as income, education, percentage of black population, female labour force participation, or rural or urban location – which would have determined the attractiveness of a county to migrants in the first place – no longer have a bearing on the current level of development of U.S. counties. Migration, by contrast, has left an imprint that still affects economic performance. This result is robust to controlling for different migration waves and to the introduction of a series of instruments, both of which indicate that past migration determines current levels of development and not the other way around.

Given the data available, we cannot directly test for the mechanisms that determine the strength of this connection. The original migrants are long gone and their descendants have blended in to U.S. society. It follows that the mechanisms through which mass migration in the late 19th and early 20th century has influenced current local development levels do not take place through direct intergenerational transfers, but through territories. Mass migration could have created a shock capable of altering the institutions of the places where migrants settled, giving them a unique character which still distinguishes them from other areas in the U.S. More research is needed, however, to unveil the exact mechanisms through which this transmission takes place.

Finally, the results of the analysis have policy implications. In a period where the debate in the U.S. is about reducing immigration or perhaps encouraging selective entry on the basis of skills and training, the results of our analysis raise a warning flag. The arrival in the late 19th and early 20th century of large numbers of young and generally uneducated migrants – precisely the type of migration that many in the U.S. wants to cap – has left a positive economic legacy that can still be felt today. It is true that the circumstances have changed and that the conditions of late 19th century America are very different from those of early 21st century America, but our results highlight that mass migration has been a powerful and, as we have seen, enduring force behind local economic development in the U.S.. Hence, the potential consequences of considerably curbing migration flows will certainly be felt in the long run. The economic dynamism of the U.S. a century down the line is therefore bound to be a result of current decisions regarding migration. This makes migration policy today crucial for the economic health of the U.S. for decades and, indeed, centuries to come.

This article is based on the paper “When migrants rule: the legacy of mass migration on economic development in the U.S.”, published in the Annals of the Association of American Geographers.

Andrés Rodríguez-Pose – LSE Geography and Environment
Andrés Rodríguez-Pose is a Professor of Economic Geography at the London School of Economics, where he was previously Head of the Department of Geography and Environment. He has a long track record of research in regional growth and disparities, fiscal and political decentralization, regional innovation, and development policies and strategies. His research is widely cited in academic circles and has also been frequently used by policy- and decision-makers.

Viola von Berlepsch – LSE
Viola von Berlepsch is a post-graduate researcher at the London School of Economics. She holds an MSc in Economics and a Diplom-VWL from the University of Konstanz, Germany and a MA in European Economic Studies from the College of Europe, Belgium. Her research lies in the areas of behavioural economics, the European debt crises and the economics of happiness.