Last week the EPA announced new regulations that would cut greenhouse gasemissions from power plants by 30 percent by 2030. Bob Ward argues that while the new regulations are a step in the right direction, it will still require huge progress in the coming decades for the U.S. to reach the Obama administration’s target of an 83 per cent reduction in total annual emissions by 2050. He writes that the most important impact of the EPA’s new rules may be to persuade the Chinese President, Xi Jinping, of Obama’s commitment to addressing climate change despite Congress’ attempts to block any attempts to reduce emissions.

Last week’s announcement by the United States Environmental Protection Agency (EPA) of plans to cut greenhouse gas emissions from power plants is further evidence of the Obama administration’s commitment to tackling climate change. However, the United States is still failing to demonstrate the scale of ambition which would be required to convince most other countries to increase their efforts. The EPA proposal would set individual targets for each state to reduce their emissions of carbon dioxide emitted per unit of electricity generated. According to the EPA, this should result in an overall reduction in the amount of carbon dioxide emitted by power plants of 30 per cent by 2030 compared with 2005.

The EPA’s proposed new limits represent a fulfilment of a pledge made by President Obama last June when he launched his ‘Climate Action Plan’. The President vowed that a stalemate in Congress, which is preventing the introduction of any meaningful new federal legislation to manage the risks of climate change, would not stop him from using his executive powers to cut emissions. The Obama administration had made a pledge at the United Nations climate change summit in Copenhagen in 2009 that total annual emissions of greenhouse gases from the United States would fall by 17 per cent by 2020 compared with 2005. Although new legislation for a federal cap and trade programme was abandoned in 2010, the Obama administration has been using existing laws to limit emissions from vehicles and power plants. The development of shale gas reserves in the United States has also helped to reduce emissions from the power sector by lowering the consumption of coal, which generates about twice as much carbon dioxide as natural gas when it is burned for electricity.

The latest EPA figures indicate that total greenhouse gas emissions were 10.0 per cent lower in 2012 than in 2005. But according to provisional figures published in January by the United States Energy Information Administration (EIA), energy-related emissions of carbon dioxide were 2.1 per cent higher in 2013 than the previous year, ending an annual decline that began in 2007. This was attributed largely to an increase in the price of natural gas which led to a slight growth in the amount of coal used for electricity generation. However, the EIA estimates did not include the impact of the new rules for power plants that were announced last week. 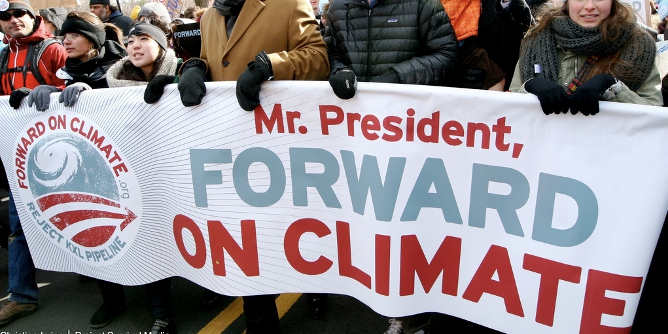 Even if the United States does achieve the goal of cutting annual greenhouse gas emissions by 17 per cent by 2020 compared with 2005, they will still only be 3 per cent lower than in 1990, which is the baseline year used by most other countries. For instance, the European Union has set a target to reduce its emissions by 20 per cent by 2020 compared with 1990. While the United States has been overtaken by China in terms of total annual emissions, its per capita emissions still remain much higher, as my colleagues Samuela Bassi and Alex Bowen point out in their chapter of a new book that analyses climate policies across the world. It will still require huge progress over the following 30 years for the United States to reach the Obama administration’s ultimate target of an 83 per cent reduction in total annual emissions by 2050 compared with 2005.

However, possibly the most significant potential impact of the new EPA regulations could be to persuade the Chinese President, Xi Jinping, of Barack Obama’s commitment to tackling climate change in spite of Congressional inaction. With international negotiations now focused on building a new agreement to be signed at the United Nations climate change summit in Paris in December 2015, strong leadership by the presidents of China and the United States could be the key to success. The two presidents have already made public declarations of their joint determination to address climate change, and could help to convince other world leaders of the need for action.

However, as the Fifth Assessment Report of the Intergovernmental Panel on Climate Change (IPCC) has warned, the collective plans of all countries are still too weak to be consistent with the goal of limiting global warming to no more than 2 centigrade degrees above its pre-industrial level. Global average temperature has not been 2 centigrade degrees higher since the Pliocene Epoch about 3 million years ago, when the polar ice caps where much smaller and global sea level was 5 to 10 metres higher than it is today. The IPCC warned of huge risks of potentially catastrophic impacts if annual emissions are not cut strongly over the next few decades to limit the probability of exceeding warming of more than 2 centigrade degrees.

In an interview with Thomas Friedman published in ‘The New York Times’ last week, President Obama acknowledged the importance of warming threshold of 2 centigrade degrees. The United States Third National Climate Assessment, published in May, warned of increasingly negative impacts on Americans. But many Republicans in the Senate and House of Representatives still openly reject the science of climate change and have vowed to block any attempts to reduce emissions, including the new EPA regulations. The lack of political consensus in Washington DC continues to undermine efforts by the United States Government to show international leadership on climate change.