The rise of personal computers has helped to narrow the wage gap between men and women.

The rise of personal computers has helped to narrow the wage gap between men and women.

In the past four decades the gap in pay between men and women has progressively narrowed, though it remains a prominent feature of the labor market. In new research Paul Beaudry and Ethan Lewis find that much of the decline in the gender wage gap can be attributed to the growing take up of personal computers (PCs) in the workplace. They also find that the more educated a market’s workers are, the more beneficial it is to adopt PCs, as they raise the skills of those in cognitive jobs more than in others .

The gap between men’s and women’s earnings received a flurry of attention this past spring as the Obama administration once again attempted to pass the Paycheck Fairness Act, a law aimed at reducing gender gaps in wages.  This gender pay gap is a highly persistent feature of the U.S. labor market, but nevertheless it has declined substantially in the past 40 years.  The solid line in Figure 1 shows the sharp decline over time in the average premium that men earn over women, where in the construction of this series we have been careful to comparing individuals with similar level of education and experience.   In the decades prior to 1980, it is generally agreed that gender wage gap was quite stable.  Why is this?  Why did the wage gap between men and women with similar education and experience decline substantially through the 1980 to 2000 period, while being rather stable before and after this period?  There are many proposed explanations.  For example, it is often argued that this is a period where social norms changed, allowing women to be treated more equally in the labor market. 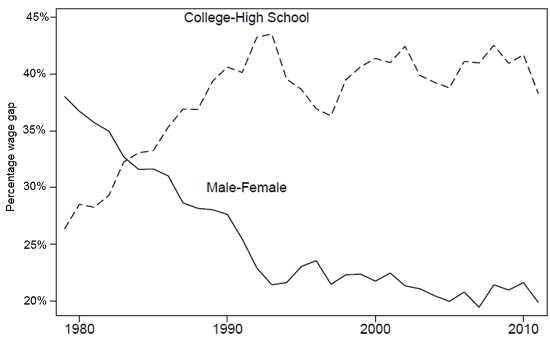 In recent research, we provide evidence that supports an alternative explanation to the decline in the male-female wage gap where market forces played a central role. We argue that technological change tied to the spread of and improvements in personal computers (PCs) from 1980-2000 was the primary reason for women’s advances in the labor market relative to men. We argue that PC technology has raised the value of cognitive and interpersonal skills (“brains”) over more physical skills (“brawn”), thereby favoring women who tend to bring to the labor market relatively more of the former than the later.

Before our study, several economists had already highlighted evidence suggesting that the reduction in the male-female wage gap may be related to more general changes in how the market pays people with different skills.  For example, Finis Welch, among others, noted the striking coincidence of the timing of the rise in the returns to education and the decline in the male-female wage gap. To illustrate this, the dashed line in Figure 1 plots that the premium that the average college graduate earn over high school graduates.  As can be seen in the figure, the returns to college and the male-female wage gap moves nearly equally but in opposite directions over the 1980-2000 period.   Note that both kinds of wage gaps in Figure 1 are presented on the same scale.   In addition, Marigee Bacolod and Bernardo Blum are among those who have noticed that women and more educated workers both tend to specialize in jobs which are more “cognitive” and less “physical” in nature.  Finally, several researchers have noticed that women are more likely to use computers at work than men are, as well as to work in occupations and industries that have benefitted more from computerization.

While this evidence alone provides a compelling argument that technological forces may have contributed something to the rise in women’s wages, assessing its importance against prominent potential alternative drivers of the rise — including declining discrimination, greater labor force attachment of newer cohorts of women, unmeasured changes in the skills of men and women who work, and the decline in blue-collar jobs that occurred for other (non-computer-driven) reasons — is difficult.  The key challenge is that the labor market value of amorphous attributes like cognitive skills cannot be directly estimated.

In light of the fact that many economists believe that much of the rise in the education wage gaps shown in Figure 1 was driven by technological change, and especially associated with computerization, our approach took advantage of the fact that computerization of the workplace has been far from geographically uniform in the U.S.  For example, in the early 2000s, markets like Scranton, Pennsylvania used on average only one PC for every 3 workers, where in other markets, including Boston and San Francisco, it was above one PC for every 2 workers.  The key driver of these differences is education levels: the more educated a market’s workers are, the more beneficial it is to adopt PCs as PCs raise productivity of those in cognitive jobs more than other jobs.  As a result, an area’s PC adoption rate is strongly predictable based on its education level prior to the existence of PCs.

Panel A of Figure 2 below shows that predicted PC use at the city level — where the prediction is based on pre-1980 data — is strongly associated with a rise in the city level college premium between 1980 and 2000.  (For more technical readers, this figure presents a two-stage least squares estimate of the impact of PCs on the return to college.) This figure supports the idea that where PCs were adopted more intensively, the return to more cognitive skills as provided by higher education grew faster.  We find that a similar pattern also holds for the male-female wage gap.  In Panel B of Figure 2, we document how changes in the male female wage gap at the city level are also related to the spread of computers.  Here we see that cities that adopted computers more intensively experience a much faster fall in the wage gap between men and women that that observed in cities which shun technological change.  Note that the magnitude of the slopes in Panels A and B of Figure 2, like that observed in Figure 1, are very similar.  Using this observation, we argue through different calculations that changing skill prices over the 1980-2000 period can account for almost the entire decline in the male wage premium observed at the national level in Figure 1. 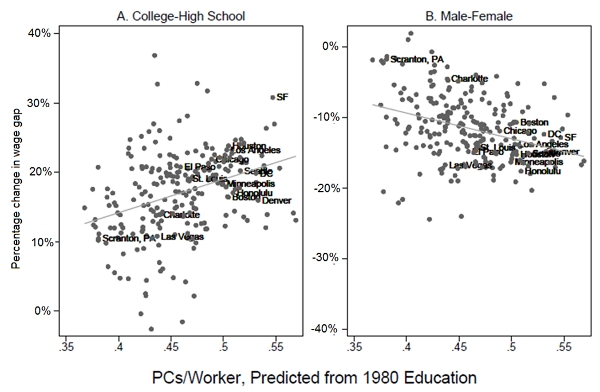 There are obviously different possible interpretations to the patterns presented in Figure 2.  Accordingly, in our work we attempted to rule out, through various means, other forces that explain the differential decline in the gender gap across cities.  For example, we controlled for year of birth to rule out the possibility that the rise of younger cohorts of women who are more attached to the labor force drove our results, and we controlled for an area’s manufacturing composition to rule out that the decline in blue-collar wages drove our results. We also controlled for state-level changes in legislation which may have affected gender wage gaps.  We found that none of these possibilities disrupted the relationship in Figure 2. This lead us to the conclusion that the relationships in Figure 2 can reasonably interpreted as causal.

Do the results of this study have any implications for legislative attempts to reduce the gender gap?  We are not willing to make strong statements about that, as there are plenty of dimensions our study leaves out.  For example, our approach takes the occupations and education decisions of women as given, when they are likely to be partially a by-product of discrimination.  Nonetheless, our research does suggest that technological forces within the economy, which are largely beyond the reach of legislators, play a substantial role in shaping how wage gaps between men and women evolve over time.  It is worth noting that the rise of office jobs in the early twentieth century is thought, according to research by Claudia Goldin, to have similarly benefited women relative to men.  However, this was followed by several decades in which the male female wage gap changed very little in spite of a rising attention to the equal treatment of women.

This article is based on the paper ‘Do Male-Female Wage Differentials Reflect Differences in the Return to Skill? Cross-City Evidence from 1980–2000, in the American Economic Journal: Applied Economics.

Paul Beaudry – University of British Columbia
Paul Beaudry is a Professor at the Vancouver School of Economics at the University of British Columbia. He is interested in everything that relates to the macro-economy, both domestically and internationally. In particular his research is related to business cycles, inflation, financial markets, the macro-economic effects of technological change and globalization, and the determinants of aggregate employment and wages.

Ethan Lewis – Dartmouth College
Ethan Lewis is an Associate Professor of Economics at Dartmouth College. His research focuses on how U.S. labor markets adjust to immigration and technological change, including how manufacturing firms adapt their production technology to employ less-skilled immigrants. Recently, he has investigated the role historical immigration waves played in advancing the second Industrial Revolution. He also examines the U.S. public education system, including how native-born families respond to rising enrollments of immigrant children in public schools.