Waging Gendered Wars aims to examine how US military women have impacted and been affected by the wars in Iraq and Afghanistan, using the analytical lens of feminist international relations theory. Paige Whaley Eager assesses the ways in which the global world of international politics and warfare has become localized in the life and death narratives of female service personnel impacted by combat experience, homelessness, and PTSD. Mercy Ette feels that the book would have benefited from some tighter editing, but overall it offers fresh insight into the impact of war on women and amplifies personal stories to illustrate the gendered nature of war.

The wars in Afghanistan and Iraq have engendered significant scholarly focus on discourses of war. Consequently, an emerging body of literature is providing critical insights into many facets of war, especially in response to the unprecedented expansion on women’s military participation.

Paige Whaley Eager’s Waging Gendered Wars is a major contribution to the debate about women in the military and the impact of war on their lives. The book interrogates the roles and positions of women in the armed forces and specifically analyses the impact of the contemporary wars in Afghanistan and Iraq on the lives of women. Eager explores the contours of the conventional understanding of the military as a bastion of masculinity by illuminating how that understanding informs public imagination of the soldier as a male body and conversely constructs military women as a distinct group. As the title suggests, the book is grounded on an understanding of war as a profoundly gendered construct. Eager, through a systematic exploration of the agencies of US military women in different contexts, examines gendered practices in the armed forces against the backdrop of feminist theory. However, she acknowledges that no single theory can encapsulate and explain the complexities of the experiences of women in the military.

Eager sets out her stall in the introductory chapter, ‘The Road to Research’, by explaining her aim: ‘to marry the theoretical views on women “and/at/in” war with empirical data on how particular U.S. military women, who have in some cases been marginalised from the academic and public discourse, actually behaved’ during the war in Afghanistan and Iraq (pp.2-3). This chapter provides a useful primer on dominant strands of feminist theory and introduces newcomers to the field without alienating the more informed. Eager asserts that different strands of feminist theory could provide a useful analytical framework for a discussion on the place and role of women in the military and uses these theoretical frameworks as scaffolding to undergird her analysis.

Waging Gendered Wars is an ambitious blend of theoretical ideas and empirical data, which the author mined from opened sources and interviews. The conceptual framework emphasises the pivotal issue of gender identity in a broad sense and specifically in a military context. A brief review of the history of the U.S. military women plots the place of women in the armed forces and highlights some policies that impact on women’s participation to illustrate the changes in social construction of war as a masculinist activity. The author explores the impact of the wars in Afghanistan and Iraq on women, not as victims, camp-followers, or supporters of male warriors, but as active participants in the wars. It is apparent from Eager’s analysis that the expansion of women’s participation in the wars has spawned distinctive problems that challenge the masculinist paradigm of war. For example, as she points out, the term ‘veteran’ is traditionally associated with a male body but due to the consequences of the expansion of women’s participation in war, that conventional perception has been challenged as thousands of women have become war veterans.

Chapters three and five are perhaps the most significant because of the way in which Eager deftly interweaves theoretical analysis of the gendered nature of war and the micro-level personal accounts of military women. She contextualises personal stories of military women who died in Afghanistan and Iraq ‘within relational, political, sociological, and economic phenomena’ (p.23). The aim of chapter five, which Eager describes as the driving force for interest in the research, is ‘to demonstrate the myriad reasons why women join the military, the support structure or lack thereof they may have in place, and finally to honour their service and sacrifice’ (p.92). While more than eighty per cent of military occupational specialities are now open to women, the ground combat exclusion policy still formally bars them from combat branches of the armed forces. However, as the personal stories Eager curates in chapter five illustrate, women are equally at risk as their male counterparts in combat-intensive branches. Telling the personal stories of sixty-seven casualties enables the author to give voice to the voiceless and the marginalised. Although each story is presented objectively, with no overt attempt to view it through feminist lens, the discussion that follows is underpinned by different stands of feminist theory and the author maximises a feminist perspective as an analytical tool to achieve one of her objectives – to facilitate an understanding of the ‘lives of the women in the U.S. armed forces who died in combat in Iraq and Afghanistan’ (p.2). She demonstrates considerable sensitivity in the way in which she recounts the personal stories of the women.

Ironically, chapters three and five are problematic sections of the book due to the author’s peculiar writing style. While the blending of personal accounts into the analysis enriched her narrative, it also marbled the discussion. In one instance, for example, the author writes:

One woman, Marine Corporal Anica Coate, a 22-year-old, was on patrol in southern Marja in early September 2010, just five feet behind Lance Corporal Ross S. Carver, 21, when he was shot through the mouth and killed by a sniper. Corporal Coate was the first to reach him, but she could not stop the bleeding. A week later at a memorial service for Corporal Coate and two other male Marines killed around the same time, Corporal Coate said she would not volunteer for the female engagement teams again (pp58-59).

Corporal Coate could not have spoken at her own memorial service as the excerpt suggests.

The book’s strength is the depth of research that informed Eager’s analysis. The book offers fresh insight into the impact of war on women and amplifies personal stories to illustrate the gendered nature of war. Eager has introduced new perspectives to the debate about women’s place in the military. 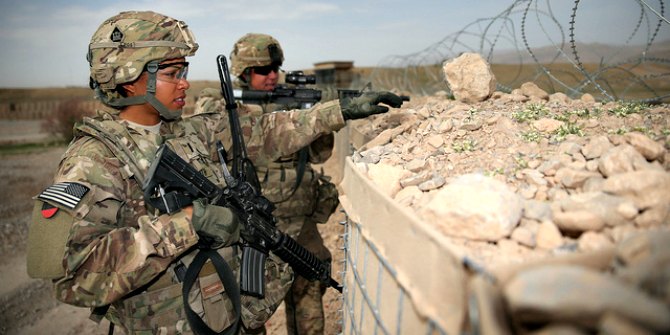 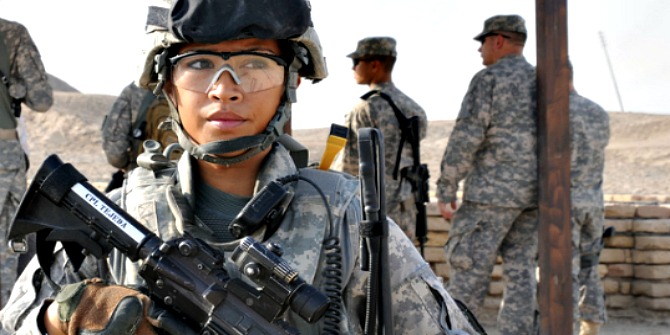