Over the next two months, in the lead up to the Congressional midterm elections, households will be bombarded with campaign publicity including mailers, which will aim to convince them to vote for one candidate over another. But are such mailers an effective campaign tactic? In new research that uses data from the 2012 elections, David Doherty and E. Scott Adler find that if sent out in the months prior to election, both positive and negative campaign mailers can be effective in increasing candidate recognition, and voter turnout. They also find that mailers sent closer to the election have little effect on voters’ attention and intention, likely because interested voters will have already found out about candidates by this point.

Political campaigns spent about 15 percent of their budgets on direct mail in 2012, yet we know surprisingly little about the effectiveness of this campaign tactic. Does sending a mailer to a potential voter affect how they feel about the candidates and whether they are inclined to turn out on Election Day? Additionally, does the flood of mail, television, and other messaging people are bombarded with during a presidential campaign cycle end up washing out the effects of any single piece of mail? In new research, we find that campaign mailers sent out several months prior to an election are noticed by voters, and increase their recognition of the candidates, but that this effect dissipates for mailers sent closer to the election.

The 2012 campaign cycle afforded a prime opportunity to answer such questions.  Partnering with Republican political strategists working we conducted two randomized field experiments to assess the effects of their direct mail efforts in three closely contested state senate races in Colorado. The first was fielded in mid-August—after the primary elections had concluded, but before the general election campaigns were in full swing. The second was fielded in mid-October, when campaigning in this presidential battleground state had reached a fevered pitch. In each case we focused on examining the effects of mailers on a group that is of particular interest to political strategists— independents who were also likely voters.

We randomly assigned some targeted voters to receive a positive mailer that touted appealing aspects of the candidate’s background and their commitment to creating jobs in Colorado. Others were assigned to receive a negative mailer, attacking their opponent as eager to raise taxes and waste public funds. A third group was not sent any mailer. Because these mailer “treatments” were randomly assigned, we were able to identify how these mailers affected recipients by comparing the attitudes of those who received a mailer and attitudes among those in the no-mailer “control” group. Any differences between individuals across these groups can be confidently attributed to the effect of having been sent a mailer.

For each experiment we measured targeted voters’ attitudes by fielding a survey that asked respondents whether they had a favorable or unfavorable opinion of (or never heard of) each of the candidates. We also asked them whether they intended to vote in the 2012 general election and whether they recalled receiving any political mail in the previous week.

In lower profile state races name recognition appears to be an important factor in determining election outcomes. Put simply, people are more likely to vote for a candidate whose name they recognize. In Figure 1 we report how each of the mailers affected whether voters recognized the name of the candidates. The results from the first experiment are clear and statistically meaningful. The positive mailer increased recognition of the Republican candidate substantially (from about 17 percent recognizing the candidate to 26 percent). In contrast, the negative mailer that focused on attacking the incumbent Democratic candidate increased recognition of that candidate from 46 percent to 52 percent. 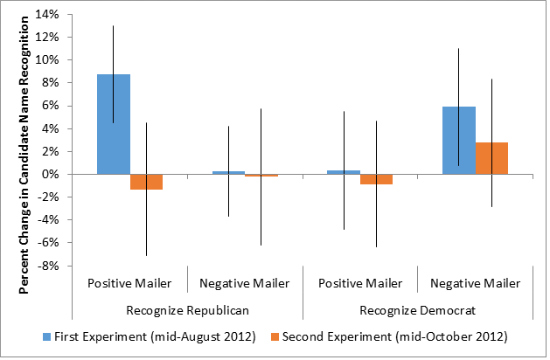 In contrast, mailers did not significantly affect name recognition in the second experiment. Our designs do not provide a way to determine why this is, but we speculate that two dynamics are likely to explain this non-result. First, the fact that the mailer treatment did not increase the proportion of voters who reported having received mail in this second study may suggest that the mailers were less effective because they faced more competition for voters’ attention. A second explanation may be that by mid-October any voters who were inclined to educate themselves about the candidates in their state Senate race had done so.

Campaigns also hope that their mailers will persuade voters to view their candidate more favorably (or view their opponent less favorably). Our evidence on this point—shown in Figure 2—is more equivocal. We find some evidence that the positive mailer improved the favorability of the Republican candidate (by about .05 units on a scale ranging from -1 [unfavorable] to 1 [favorable]). However, none of the other estimated effects can be statistically distinguished from zero. In other words, we cannot be confident that the differences we find between those who received a particular mailer and those who did not are meaningful. This holds for both the first and second experiments.

Figure 2 – Effects of Mailers on Favorability Ratings of Candidates 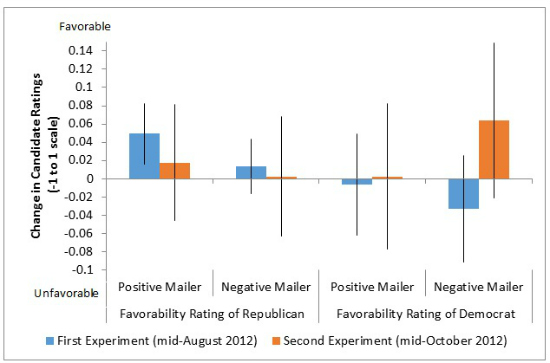 Finally, we assessed whether voters who were sent mailers were more likely to say they intended to vote in the 2012 general elections. We measured these intentions on a scale ranging from 1 (definitely will not vote) to 4 (definitely will vote). In Figure 3 we show that voters who were sent a mailer were more likely to say they intended to turnout (though the effect of the positive mailer falls just short of conventional thresholds of statistical significance in the first experiment). Although the effect sizes appear to be quite small (about .1 units on a scale ranging from 1 to 4), it is important to consider that even voters who were not sent a mailer reported very high levels of intent to turnout (about 3.7). Thus, there is little “room” for a large effect here.

Figure 3 – Effects of Mailers on Reported Intent to Turnout 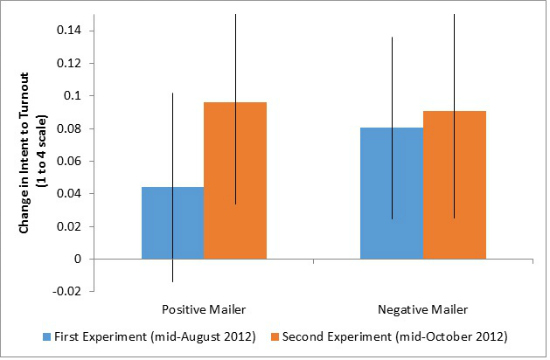 Taken together, our findings contradict claims that “going negative” leads voters to disengage from politics. Both the negative and positive mailers increased intent to turnout. Additionally, the fact that the mailers affected turnout intentions in the second experiment suggests that the mailers did register with recipients, in spite of increased competition from other campaign messages. Thus, we suspect that the lack of name recognition effects in this second experiment was primarily a function of interested, targeted voters having already learned the candidates’ names by the time this study was fielded.

One other point about our analysis is warranted: our evidence is consistent with otherwork on the effects of political advertising in that it suggests that the effects we have discussed here dissipate rapidly. By the time we fielded the second study those who were sent a negative mailer in mid-August were no more likely than those who received no mailer in the first round to recognize the Democratic candidate or say they would definitely be voting on Election Day. Similarly, although the mailers increased reported intentions to turnout in mid-October, when we checked official turnout records we found no evidence that voters in this group were more likely to turnout three weeks later.

Our study, in concert with other similar experimental work, suggests that campaign mailers can be a valuable arrow in a strategist’s quiver. They are relatively cheap and can be more precisely targeted than broadcast communications. Mailers—particularly positive mailers that highlight a candidate’s strengths (and name)—may be particularly useful in lower profile races where increasing candidate name recognition is crucial. Though mailers may be a useful weapon, the rapid decay of their effect makes them far less than a magic bullet.

E. Scott Adler – University of Colorado, Boulder
Scott Adler is Professor of Political Science at the University of Colorado, Boulder.  His expertise is the US Congress, elections, political institutions, and policy making.  Among his books are Why Congressional Reforms Fail: Reelection and the House Committee System (University of Chicago Press, 2002), and The Macropolitics of Congress(co-edited with John Lapinski; Princeton University Press, 2006). His most recent book, co-authored with John Wilkerson, is Congress and the Politics of Problem Solving (Cambridge University Press, 2012).  Adler and Wilkerson have an associated website and blog.