Freedom of speech is one of the founding concepts of the American Republic. But at what point do people become unwilling to tolerate the statements of others? In new research, David Doherty and James Stancliffe investigated what affects people’s willingness to tolerate speech related to terrorism and violence. By varying the features of a story about a speech-related arrest participants read, they find that people are less tolerant of speech when the speaker was apparently Arabic or when media reports characterized the speech as advocating violence.

Although most Americans embrace free speech protections in principle, like all liberties, these protections are not boundless. As Supreme Court judge Oliver Wendell Holmes famously wrote in Schenck v. United States (1919): “[t]he most stringent protection of free speech would not protect a man falsely shouting fire in a theater and causing a panic.” Contemporary concerns about the ability of extremist groups to recruit individuals to inflict harm on civilians raise thorny questions about the boundaries of civil liberties protections. Some argue that vehement criticism of American policy and accompanying calls to resist the government are akin to shouting fire in a crowded theater, posing unacceptable dangers to bystanders by inspiring violence. However, others worry that government officials may use the specter of terrorism as a pretense to persuade the public to accept infringements on people’s right to freely criticize the government.

In a recent research, we used an experimental design to examine the factors that affect people’s willingness to tolerate speech. We asked people to read a story about the FBI arresting someone for posting a video of an inflammatory speech to YouTube. The story included the “full text of the speech,” which sharply criticized US foreign policy. The speech included phrases like “If there is a country that has committed unspeakable atrocities in the world it is the United States of America.” and that “blood is on the hands of anyone who does nothing to resist American aggression.”

We randomly altered three components of the story. First, we varied how the speech was “framed.” For some participants, the headline read “FBI Arrests Local Leader for Speech.” For others, the headline instead either read “FBI Arrests Local Leader for Advocating Violence” or “FBI Arrests Local Leader for Advocating Terrorism.” Second, we varied the name of the speaker. Respondents were either not provided with the speaker’s name or were presented with a version of the story where the speaker’s name was Anglo (Jason Thompson) or Arabic (Abdullah Ibrahim). Finally, we varied whether the speech included an explicit call to violence. For some participants the speech ended with the following two sentences: “It’s time for America to get a taste of its own medicine. Violence can only be fought with violence.”

After people read the story, we measured their willingness to tolerate the speech with questions about their level of support for the FBI arresting the individual, support for encouraging the type of speech they read about, and several other items in this vein. As expected, people who read a version of the speech that included an explicit call to violence were less tolerant of the speech. For example, as Figure 1 shows, people were about 1 unit more supportive of the FBI arrest when the speech included a call to violence (on a 1-7 scale). However, we also found that the effect of the headline describing the speech as advocating terrorism or violence, rather than simply as speech was almost as large—about .7 units. When the speaker had an Arabic, rather than Anglo name, tolerance took a similarly substantial hit—almost .6 units. 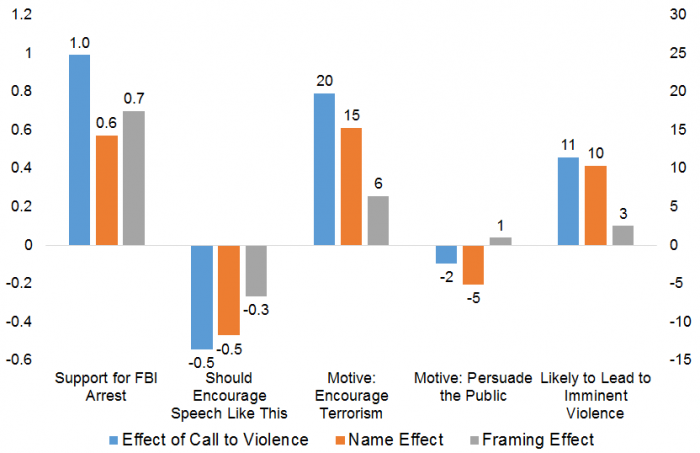 NOTE: Bars show the effects of our experimental treatments on each of five outcome measures. Name Effect: effect of speaker having Arabic, rather than Anglo, name. Framing Effect: effect of speech being characterized as advocating violence or terrorism, rather than simply as “speech.” We measured support for arrest and encouraging speech on a 1-7 scale. Remaining measures were on a scale from 0-100.

This pattern held across all of our measures of tolerance. We consistently found that people were less tolerant of a speech when the speaker was apparently Arabic or when media reports characterized the speech as advocating violence and that sizes of these effects were comparable to (and often statistically indistinguishable from) the effects of the speech explicitly advocating violence.

Of course in order to convict someone for engaging in speech, it is not enough for people to simply be inclined to prohibit it. Longstanding Supreme Court precedent states that speech cannot be prohibited unless it is “directed to inciting or producing imminent lawless action and is likely to incite or produce such action.” In other words, in order to punish speech, the speech must be intended to cause lawless action (e.g., violence) and be likely to do so. However, definitively identifying a speaker’s intentions or sorting out exactly how likely a particular speech is to lead to violence is arguably impossible. Perhaps the forces that lead people to be less tolerant of a speech also affect their inferences about a speaker’s intentions or the likely consequences of their words?

We explored this possibility by asking people a number of other questions about the story they read. They rated how important they thought a number of violent motives were (e.g., “to encourage terrorism”) as well as the importance of several policy-related motives (e.g., “to persuade the public to oppose US foreign policy”). They also rated how likely they thought the speech was to lead to violence.

So what do our findings tell us about free speech protections in an era where the specter of terrorism tied to Islamic fundamentalism looms large in the public mind? First and foremost they show that factors that arguably should not affect tolerance of speech—the speaker’s apparent ethnicity and how a speech is framed—can be almost as potent in shaping these judgements as key features of the speech itself. They also show that these factors affect judgements about a speaker’s intent and the likely consequences of a speaker’s words—centerpieces of legal standards regarding the bounds of free speech. More broadly, our findings raise troubling questions about the fragility of public commitments to free speech. They suggest that ethnic biases and elite attempts to frame speech as dangerous may lead the public to support greater restrictions on speech that is critical of government policy.

This article is based on the paper, ‘Interpreting and Tolerating Speech: The Effects of Message, Messenger, and Elite Framing’ in American Politics Research.