Much conservative ideology is underpinned by the idea that in a just world, people should get what they deserve through hard work and opportunity. But if the world is not a just one, does people’s understanding of deservingness influence their support for government and its policies? Using results of the General Social Survey from between 1994 and 2006, Vicky Wilkins and Jeffrey Wenger find that individuals’ beliefs about deservingness influence the public’s support for particular policies, including affirmative action. They write that those who believe that luck is the most important determinant of getting ahead are more likely to support hiring preferences for women and African Americans, whereas those who believe hard work is the key are less likely to support preferential hiring.

“That government is best which governs least.” This radical idea – promoted by Henry David Thoreau, but certainly preceding him – barely raises an eyebrow in modern America. Lost in the debate of government as infringing on individual liberty, are citizens’ demands for a government that metes out punishments and rewards to the deserving. This conflation of liberty and desert is no more obvious than at a Tea Party rally. Tea Party adherents demand limits on government spending: a call to enhance liberty by being unshackled from taxes. Simultaneously, they protest about benefits going to the “wrong” people – the undeserving. (It is interesting to see the “Get the government out of my Medicare” and signs that inveigh against taking resources from Medicare to give to Obamacare at Tea Party rallies and town hall meetings). Deservingness, rather than liberty, provides a different rationale for limited government: when the world is perceived as just, when people get what they deserve, when opportunities appear equal and fair, then government should “govern least.”

That fair rules of competition and an equal starting line could serve as the basis for limited government runs into problems once we take into consideration psychological experiments dating back to the 1960’s. Numerous experiments suggest that people are strongly predisposed to believe that the world is a just and fair place – even when it is not. Additionally, research suggests that beliefs about deservingness are automatic, stem from emotions, operate below the surface of consciousness, and are often difficult for individuals to explain.

To understand how deservingness plays out in the design and implementation of social policy, we theorize that individual beliefs about deservingness influence both policymaking and public support for particular policies. We test our theory using beliefs about the role of hard work (compared to luck) in getting ahead as a measure of a belief in a just world, arguing that people who perceive the world as just are less likely to support government policies targeted toward helping particular groups get ahead or overcome past discrimination. All of our measures, including the hard work/luck question and opposition or support for affirmative action come from the US General Social Survey from 1994-2006 (even years). 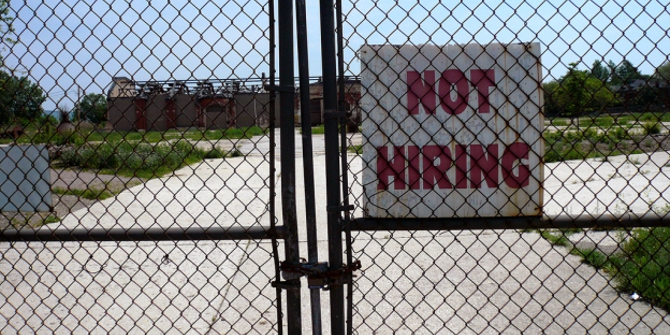 Our results also point to the interesting politics of supporting affirmative action for women and African-Americans. We find that “Conservative” is associated with a significant reduction in support for affirmative action for both women and African Americans. The effect of being a conservative (relative to extremely liberal) reduces the probability of supporting preferential hiring of women by 15-16 percent depending on the specification. Relative to the extremely liberal, those who are slightly liberal, moderate, slightly conservative, conservative, and extremely conservative are significantly less likely to support preferential hiring of African Americans. This was true even after we controlled for the role of “hard work” and “luck.”

To offer an additional test of our hypothesis we estimate our preferential hiring of African Americans model controlling for a range of racial attitudes (no similar set of variables is available for women). We include four separate racial difference variables in our analysis. In each case the respondent is asked to answer “yes” or “no” to four questions about racial differences. These differences are due to: 1) discrimination, 2) inborn disability, 3) education, and 4) lack of will. After controlling for racial attitudes we still find a positive and statistically significant effect of hard work on reducing support for preferential hiring for African-Americans.

Our results suggest that peoples’ predisposition for seeing the world as a just and fair place, and the attendant feedback loops, makes policymaking to help disadvantaged groups such as immigrants and racial and ethnic minorities a Sisyphean endeavor. Developing mechanisms that help correct the systematic bias toward seeing the world as fair would seem to be the first priority for formulating better social policy.

This article is based on the paper, ‘Belief in a Just World and Attitudes Toward Affirmative Action’, in the Policy Studies Journal.

Jeffrey Wenger – University of Georgia
Jeffrey B. Wenger is an associate professor of public policy at the University of Georgia’s School of Public and International Affairs, Department of Public Administration and Policy. He is currently on leave, and is the NIH/NIA Research Fellow in the Study of Aging for the 2013-2014 academic year at the RAND Corporation in Santa Monica. His research interests span a number of substantive areas: in particular, unemployment insurance, health insurance and pensions coverage. His theoretical work examines policy diffusion mechanisms and the role of deservingness in public policy analysis.