Socioeconomic stereotypes are powerful predictors of Americans’ desire to raise or lower taxes on the wealthy.

Socioeconomic stereotypes are powerful predictors of Americans’ desire to raise or lower taxes on the wealthy.

The issue of whether or not the rich should pay more in tax is a divisive one in American politics. But what determines people’s attitudes towards tax policies of this sort? In new research, Jordan Ragusa finds that people’s stereotypes about the rich have a major influence over whether they feel that they should be taxed more or less. He writes that those that say that the rich “work hard” and are “job producers” want lower taxes on the wealthy, while those who said the rich became wealthy because of an “inheritance” and are “selfish”, want higher taxes.  Notably, the powerful effect of stereotypes exists even when taking into consideration an individual’s personal wealth and political ideology.

Debate in the United States has focused on the merits of increasing taxes on the wealthy in order to balance the federal budget and alleviate growing income inequality.  Whether the wealthy pay their “fair share” and “deserve” higher or lower taxes taps into deeply held values regarding fairness, social cooperation, work ethic, and economic individualism, and generates strong personal opinions across the political spectrum. Given this contentious debate, an important question is: What explains variation in Americans’ preferences for raising or lowering taxes on the wealthy?  While some researchers have examined the effects of personal ideology and economic self-interest, an equally important causal process has been neglected: the potential effect(s) of socioeconomic stereotypes.

The possibility that socioeconomic stereotypes affect one’s preferences for taxing the wealthy is not fanciful. Indeed, much of the national debate about taxes and income inequality hinges on how one perceives “the rich.” Do the rich derive their wealth from dispositional characteristics such as “hard work” or situational characteristics such as their family’s “inheritance?” Do the rich benefit society because they are “highly educated job producers” or are they “selfish, out of touch snobs?”  In new survey research, I find that perceptions of the “the rich” are a powerful predictor of one’s tax policy preferences.

In the study of politics and public policy, there is ample evidence that stereotypes influence preferences in certain domains, most notably when the perceived “target” or “beneficiary” of some policy is a racial or ethnic minority.  In particular, numerous studies find White Americans’ opposition to various programs—including social security, welfare, affirmative action, etc.—are associated with negative views of African Americans. Based on this research, I theorize that similar dynamics exist in the context of taxing the rich. As with policy questions relating to social assistance programs, the question of whether taxes on the rich should be raised or lowered is easily associated with a targeted group (i.e., wealthy Americans). Indeed, when considering the issue of tax policy, individuals may draw on stereotypes of the rich in a similar manner that individuals draw on stereotypes of other targeted groups.

Table 1- Stereotypes of a “Rich Person” by Tax Preference 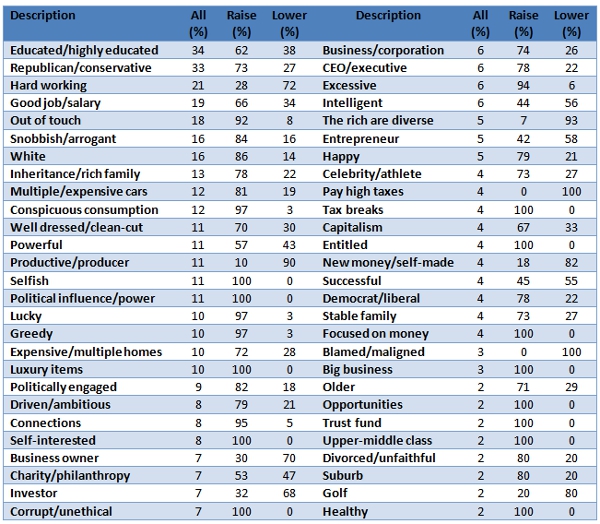 Note. The responses to the “raise taxes on the rich” question were collapsed into two categories. For simplicity, the table was created with the dependent variable in the columns and the independent variables in the rows. The percentages were calculated (correctly) within stereotype categories. The number of total responses was 1,374 and the number of total respondents was 302.

As Table 1 shows, there is an unequal concentration of stereotypes offered by both tax raisers and tax lowers. For instance, “selfish,” “greedy,” “lucky,” and “out of touch” were all offered almost exclusively by tax raisers while “producer,” “pay high taxes,” and “blamed” were offered almost exclusively by people who want taxes on the rich to be lowered.

In the second analysis, I examined two dimensions coded for deservingness: “reciprocity” (whether the rich exhibit pro-social behaviors and benefit society) and “control” (whether the rich are responsible for their own wealth), finding them to both be statistically significant predictors of American’s tax policy preferences.  On the former, some respondents said the rich are “highly educated job producers who give money to charity” while others said the rich are “greedy and selfish.”  On the latter, some respondents said the rich are “hard working and self-made” while others said the rich get their wealth from “inheritances” or “tax breaks.” Consistent with expectations, respondents who said the rich “work hard” and are “job producers” want lower taxes on the wealthy while those who said the rich became wealthy because of an “inheritance” and do not benefit society because they are “selfish” want the wealthy to pay higher taxes.  And as with earlier, the total effect of these two deservingness stereotypes is just as large statistically as the effect of personal ideology.  Once again, socioeconomic stereotypes matter.

Socioeconomic stereotypes are indeed powerful predictors of whether Americans want higher or lower taxes on the wealthy, mattering just as much as personal ideology.  The findings also suggest that stereotypes can affect policy preferences even when the target belongs to an advantaged group and the policy domain is nonracial.  Indeed, the lion’s share of research in this area has examined racial stereotypes their effects on views of social programs.

This article is based on the paper ‘Socioeconomic Stereotypes Explaining Variation in Preferences for Taxing the Rich’ in American Politics Research.

Jordan Ragusa – College of Charleston
Jordan Ragusa is an assistant professor of political science at the College of Charleston.  His research and teaching interests are in the fields of American politics and institutions, political behavior, political economy, empirical theory, and research methodology.  For more information, visit his research page.  In addition to his academic writing, Ragusa is also the co-author of the American politics blog Rule 22 and is a regular contributor at the Christian Science Monitor.