The rate of capital accumulation in the USA has fallen markedly in recent decades. The financialization and shareholder value literatures argue that the cause is a diversion of profits from productive investment towards financial markets and investments.  Shannon Williams and Andrew Kliman show that such arguments are not supported by the data and that the fall in US corporations’ rate of profit explains why the rate of capital accumulation fell.

During the past several decades, the rate of capital accumulation by corporations (net investment in fixed capital assets) has fallen, and economic growth has slowed down as a result. At the same time, companies increased their financial investment in relation to their productive investment and paid out larger sums to financial markets in the forms of interest, dividends and stock repurchases. Appealing to these phenomena, heterodox economists and sociologists in the financialization and shareholder value traditions suggest that profit has been diverted from productive investment towards financial uses.

However, we argue that such diversion did not take place; the rise in financial purchases and payments did not take place at the expense of productive investment. Neoliberalism and financialization did not produce a fall in the share of profits that was productively invested. The falling rate of capital accumulation is therefore due, instead, to a relative decline in the profit available for investment—that is, to a fall in US corporations’ rate of profit.

The importance of borrowing

Corporations’ increasing involvement in financial markets did not constitute a diversion of profit from production to finance, because increases in financial acquisitions and payouts were essentially funded by additional borrowing. If profits were the only source of funds for financial and productive investment, a rise in the former would necessitate a fall in the latter. But since borrowed funds are also available, financial investment can (and did) rise as a share of total investment without depressing the share of profit that is productively invested.

The following facts are noteworthy: 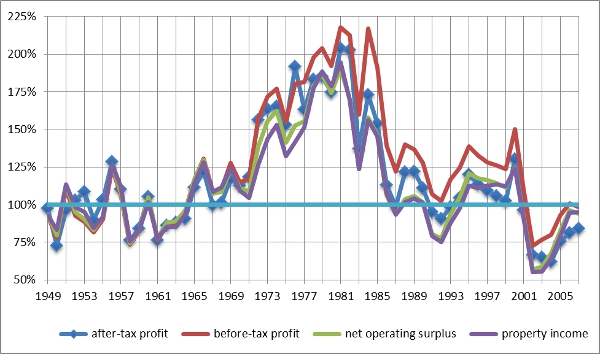 A sharp decline in investment and a large, though temporary, spike in profitability occurred after 2001. As a result, three of the investment shares for the neoliberal period as a whole—including the post-2001 period–fall short of the averages for the 1949–80 period. However, this fact cannot be attributed to neoliberalism, since the investment share was not inferior to the pre-neoliberal share during the first 21 years of neoliberalism. It then plummeted suddenly (see Table 1). 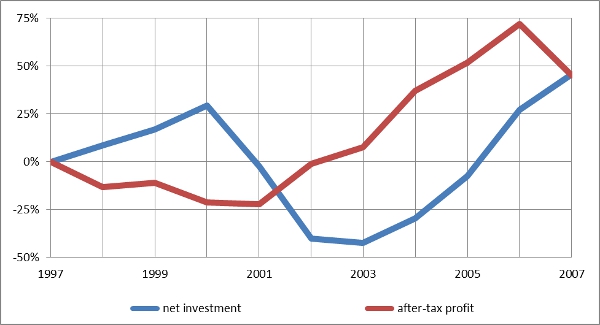 The falling rate of accumulation 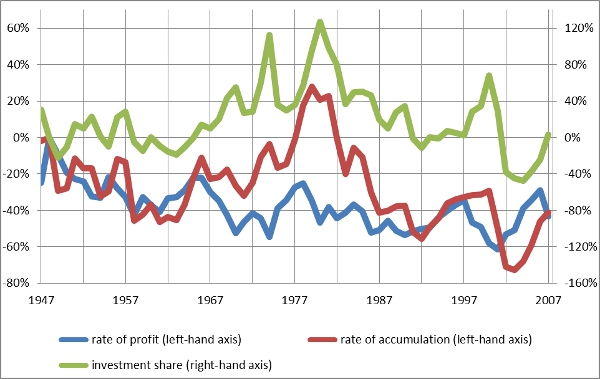 Falling profits led to the trend towards dis-accumulation

Some authors have recently argued that diversion of profit from production is a major underlying cause of the recent financial crisis and Great Recession. In addition to freeing up funds for speculation, such diversion supposedly depressed investment and economic growth, which in turn boosted the debt burdens of households and government. This line of argument suggests that macroeconomic policies that reverse the diversion of profit from production are crucially important to prevent a recurrence of the recent crisis (Duménil and Lévy 2011, p. 301). However, our findings suggest that inasmuch as such policies are a solution to a non-existent problem, they are not likely to be effective. Since a long-term slump in profitability, not diversion, is what led to the trend towards dis-accumulation, it is unlikely that the trend can be reversed in the absence of a sustained rebound of profitability.

This article is based on the paper “Why ‘financialisation’ hasn’t depressed US productive investment,” in the Cambridge Journal of Economics 2014, where readers may find full references to others’ works, data sources and procedures.

Andrew Kliman – Pace University
Andrew Kliman is a professor of economics at Pace University and the author of Reclaiming Marx’s “Capital”: A Refutation of the Myth of Inconsistency (2007) and The Failure of Capitalist Production: Underlying Causes of the Great Recession (2012).