The potential Republican victory in Iowa has been the focus of a great deal of press attention, but it is just one of the interesting stories surrounding this election. Following recent Supreme Court decisions, including the notable Citizens United case, campaigns have experienced a revolution in spending changes. These changes, which are clearly on display in the Hawkeye State, write David Andersen and Tessa Ditonto, have fundamentally transformed what it means to campaign for office in the United States and could be a crucial factor in determining the winner of this election, as well as the balance of power in the Senate.

While Iowa voters, who experience the first presidential caucuses in the nation every four years, are accustomed to heavy campaign activity and massive spending at the presidential level, this is not true of Senate elections. The state’s current senators, Republican Chuck Grassley and Democrat Tom Harkin, have each been in office for over 30 years and have rarely faced serious threats to reelection. Both also defeated incumbents when first entering the Senate, making this year’s Senate election the first without an incumbent in almost 50 years. With Harkin not seeking reelection this cycle, for the first time for many Iowans, they must now learn about and evaluate two unfamiliar candidates.

Another first for Iowans this year is the level of outside spending making its way into this Senate race. Following the Supreme Court’s Citizens United decision in 2010, spending money to spread information in campaigns has been equated to free speech, opening the door for individuals and groups outside of the campaign to spend freely in the name of “educating” voters.  Legally permitted “independent expenditures” are now able to inform voters about candidates and issues, and even to provide endorsements for or against those candidates. There is no upper limit on these expenditures and, in many cases, the names of the donors do not even need to be disclosed. Importantly, though, they must be truly independent and are prohibited from coordinating with the candidate or their campaigns. This has created a new world of “dark money” that injects new voices into the campaign that are not attached to any specific candidate, or even to clearly identified supporters. Now voters don’t necessarily know who is making the claims they see, and the candidates may not either.

Iowa is a prime example of this new environment. The two candidates have been successful when it comes to raising funds and generating campaign attention. Both have already raised and spent more money than any other candidate in Iowa history. And yet, their voices are largely drowned out in the state’s information environment. This is not because Iowans aren’t paying attention to the candidates, or that the candidates can’t afford to advertise. It is because they are being massively outspent by supporters and detractors via outside independent expenditures.

To date, Democrat, Bruce Braley has raised more money than the GOP’s Joni Ernst—about $9.7 million compared to $8.6 million, respectively (estimates from the Omaha World-Herald, October 16). This money is being spent on campaign advertisements, but also on building statewide campaign teams, including developing the get-out-the-vote efforts that will be deployed on Election Day. According to data from the Center for Responsive Politics, their respective parties are also contributing, with the Democratic Senate Campaign Committee spending about $7.5 million to date, and the Republican Senate Committee spending about $4 million. Party spending has long been a feature of campaigns, and the party generally spends most of its money disparaging the opposing party’s candidate. Clearly, though, these figures pale in comparison to outside spending.

As of mid-October, more than $1.5 million has been spent to support Braley by outside sources, while over $13 million has been spent attacking him. This almost $15 million is nearly equal to the entire war chest Braley and his Party have assembled to run his campaign, meaning that outside groups have as many resources devoted to spreading information about him to the public as his own campaign does. Yet these outside groups have no accountability. They can say whatever they wish about the candidate and face nothing more severe than a monetary fine that is imposed after the election is over.

Shockingly, Braley is in the better position of the two candidates. While Ernst has benefited from nearly $8.6 million of outside spending supporting her candidacy (an amount equal to her own personal fundraising to date), almost $19 million has been spent attacking her by outside groups. This is more than both candidates’ war chests combined! Even if Braley decided to endorse his opponent and run ads in her favor (not that this would ever happen), the two candidates would be outspent by independent expenditures opposing her.

Why does this matter? This volume of spending severely diminishes a candidate’s ability to create her candidacy on her own terms. Even a candidate’s opponent has little ability to dictate the way in which she is portrayed. Instead, both candidates must react to how outside spending groups choose to portray them, responding to the narratives that are constructed around them. In Iowa, outside spending groups are dominating the conversation, and have taken over most of the responsibility of telling Iowa voters what the candidates stand for. 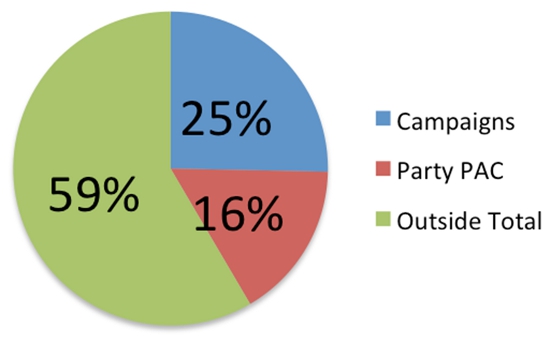 Breaking down fund-raising in Iowa, we find that the two candidates, combined, only account for about 25 percent of total spending. Their parties account for another 16 percent, providing another perspective, but one that is affiliated with the candidate. Outside spending accounts for the remaining 59 percent of spending. It is important to remember that outside spenders are not restricted to making independent expenditures, but also contribute to both campaigns and the Party PACs that make up the other 31 percent of total expenditures. Their voices affect what candidates say, what the parties say, and then come through loud and clear in their own advertisements. If campaigns are about getting one’s message out, outside spending groups are clearly dominating this year’s election, and given the trends in increased outside spending, we can only expect this to continue in the future. 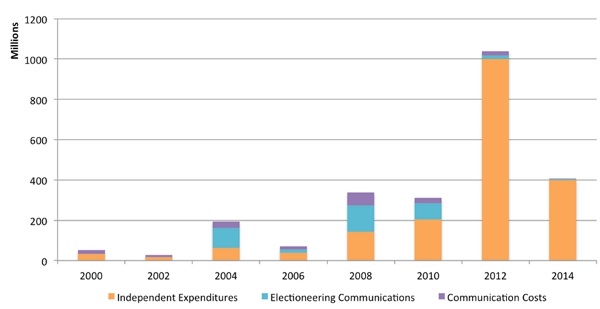 David Andersen – Iowa State University
David Andersen is an assistant professor at Iowa State University. His research focuses on how people learn about politics and political candidates, focusing on how psychological limitations on attention and memory can constrain our democratic process. He also studies the nations’ governors and how the state-level executive functions differently than the president.