While unemployment and levels of economic growth in the U.S. have returned to levels not seen since the onset of the financial crisis in 2008, inequality remains a significant problem. In new research, Megan E. Hatch and Elizabeth Rigby examine the role of state-level policies in reducing or increasing inequality. They find that inequality can be reduced through a combination of high taxes on the wealthy, low taxes on the poorest, and labor market regulations that are favorable to workers, such as minimum wages and an absence of right to work laws. Surprisingly, they also find that greater spending on the poor is associated with higher levels of income inequality.

Income inequality in the United States has been on the rise since the 1970s, with the wealthy taking a growing share of national earnings. However, this increase has not played out the same way in all 50 states. Economic gaps have widened in some states much more than in others. In new research, we focus on differences in the redistributive policies that states adopt to help explain this variation among states. Using data on state policies and trends in income inequality from 1980 to 2005, we show that tax policies, labor market regulations, and programs for the poor can make a real difference in income inequality.

The Impact of Equality-Enhancing Policies in the U.S. States

Taking into account many social and economic factors known to affect inequality, we measured the impact of four kinds of tax and economic policies on state-level trends in the income share of the top one percent and in the overall distribution of income (measured in a standard way using Gini coefficients). Both of these measures capture “market inequality,” which indicates the gap in what people earn before accounting for government taxes and transfers. We found a relationship between market inequality and each approach to redistribution.

First, higher taxes on the wealthy reduce income inequalities.Taxes on capital gains, top marginal earnings, and corporate incomes target the very wealthy and trim the incomes and forms of compensation especially benefitting the top one percent. Second, lower taxes on the poor reduce income inequalities, especially tax credits for the poor and reductions in sales taxes that hit the poor hardest. Our measurements suggest that such tax benefits for the poor help others as well, reducing income gaps overall.

We also found that labor market regulations favorable to workers, such as state minimum wages and the absence of right to work laws, also decrease income inequalities. Such state laws shrink income inequalities overall and reduce the share of income going to the top one percent. But more spending on the poor, including health, welfare, and education spending, is associated with higher levels of income inequality overall.

What Inequality Could Have Been

To see exactly how much of an effect state redistributive policy approaches have on income inequality, we simulated three hypothetical state policy regimes – to compare state policies in recent times to alternative packages of more and less equality-enhancing laws.

As Figure 1 shows, if U.S. states had adopted less equality enhancing policies, the income share of the top one percent would have increased by more than 20 percentage points between 1980 and 2005. In reality, that share grew by 11 percentage points under the average state policies. But if states had pursued more equality-enhancing policies of the sorts we measured, then the top one percent’s share of income would have grown by only 1.6 percentage points – leaving states in a more equal economic direction than Americans have experienced in recent times. We found similar results using our Gini coefficient measure of trends in overall income distributions. 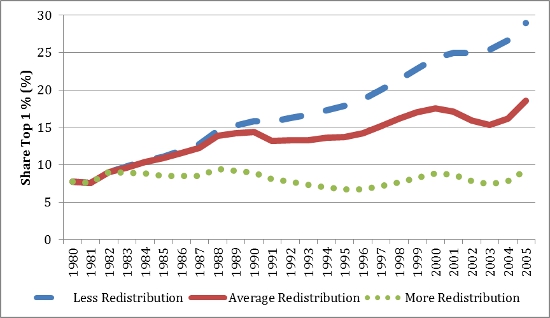 Our most surprising finding is that higher levels of state-level spending on the poor go hand in hand with greater income inequality. More needs to be learned about why this happens. Perhaps, poor people earn less in the labor market if they can qualify for more social benefits. State-level policymakers may still have good reasons to fund relatively generous social programs, but they should understand that the effect may be to increase inequalities in market earnings. The traditional view is that government can do the most to reduce economic inequality by using taxes to fund social programs. But our research underlines the importance of pursing taxes and regulations that can make market incomes more equal in the first place.

This article was originally published as a Scholars Strategy Network Brief, and is based on the paper “Laboratories of (In)equality? Redistributive Policy and Income Inequality in the American States” in the Policy Studies Journal.

Megan E. Hatch – Cleveland State University
Megan Hatch is an Assistant Professor of Urban Policy and City Management at the Maxine Goodman Levin College of Urban Affairs at Cleveland State University. Her work focuses on issues of inequality and equity, broadly construed. One stream of Dr. Hatch’s research agenda examines the political context and consequences of redistributive policies, especially on income inequality. Another stream of her research explores state laws that govern unsubsidized rental housing: how they vary across states, the political debate surrounding the adoption of the laws, and their consequences for renters and rental markets.

Elizabeth Rigby – George Washington University
Elizabeth Rigby is an Associate Professor in the Trachtenberg School of Public Policy and Public Administration at George Washington University. Her research examines the interplay of politics, policy, and social inequality. In current projects, Dr. Rigby studies the representation of the poor across state legislatures, public opinion regarding health disparities, and other forms of social inequality, and the political dynamics surrounding enactment and implementation of federal health care reform.