The new Republican controlled Congress has put further restrictions on abortion near the top of its agenda for this legislative session. Rebecca J. Kreitzer looks at another arena where the GOP is also working to expand abortion restrictions – in the American states. She writes that in the last two decades, more than 700 state laws have passed which while keeping abortion legal, make it nearly inaccessible. She also finds that those states with Democratic women legislators are more likely to block more restrictive abortion policies, rather than expand access.

The issue of legal abortion is near the top of the Republican legislative agenda in Congress. In just the first three days of the new legislative session, Republicans in Congress introduced five bills to restrict access to abortion in various ways.  A vote on a controversial 20-week gestational ban scheduled to take place on the anniversary of the Supreme Court case Roe v. Wade (1973) was abruptly cancelled because of lack of support from Republican women. Despite this setback, Republicans passed a ban on the already-illegal public funding of abortions and introduced yet another abortion bill that would require ultrasounds before abortions can occur.

The proposed gestational ban on abortions in Congress highlighted some critical divisions in the national Republican Party and has been tabled for the time being. Despite this, these types of policies are already in effect in ten states and in late January, three additional states introduced similar bills. Since the early 1990s, the number and variety of state laws that place restrictions on abortion has grown rapidly. There has been an unprecedented wave of anti-abortion policies in the last few years, with more restrictive abortion policies enacted between 2011 and 2013 than the previous decade. According to the prominent anti-abortion news source LiveAction, Roe v. Wade (1973) requires that abortion be legal, but not that it be easily accessible. Strategic legislators recognize this distinction and no longer seek to make abortion illegal; instead they seek to make it virtually inaccessible. This strategy of “legal but inaccessible” has resulted in the adoption of a plethora of restrictive abortion policy; more than 700 of these state laws have passed since the early 1990s. The adoption of legislation that expands or protects existing access to abortion is also increasing, albeit at a much slower rate than restrictive policies. 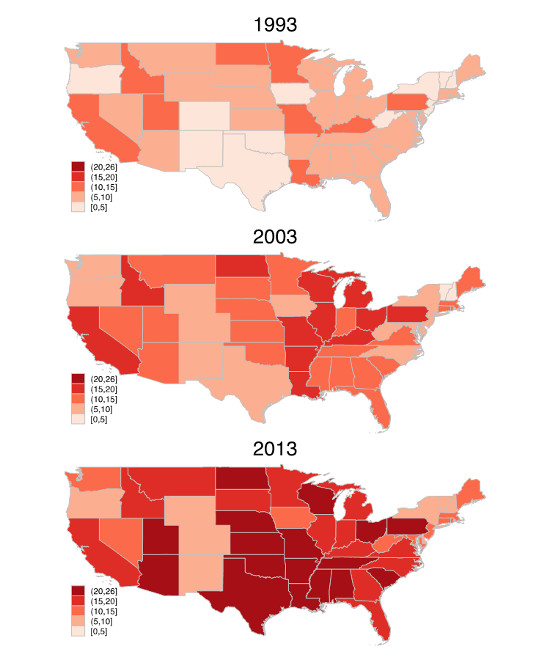 Note: Maps show how many of the 29 anti-abortion rights policies included in the study were adopted by the states in each year.

Resolving the question of what shapes state abortion policy is not just one of theoretical importance, it is of practical importance. The number of women affected by abortion policies is not small. Approximately 35-40% of all American women will have an abortion at some point in their life.  As a result of restrictive abortion policies, clinics are closing at a record rate. For example, four states have only one clinic and a Texas law in 2014 threatened to close 19 clinics almost overnight. In 2011, 33% of American women of reproductive age lived in the 87% of counties without an abortion provider.

The question of what causes abortion policy in the states is also an important because these policies affect women differently. Low-income and minority women are five times more likely to have an abortion compared to higher-income women. Abortion restrictions such as mandatory waiting periods and prohibitions on Medicaid funding result in low-income and minority women being more likely to have later abortions, incurring higher costs and greater medical risks.

This article is based on the paper ‘Politics and Morality in State Abortion Policy’ in State Politics & Policy Quarterly.