The city of Detroit was one of the major casualties of the 2008 financial crisis, finally filing for bankruptcy in July 2013. Seth Schindler looks at how the city’s bankruptcy has acted as a catalyst for change. He writes that Detroit has moved from a ‘growth machine politics’ characterised by a push for economic growth at the expense of urban services, to a policy of ‘degrowth’ which rejects fiscal austerity in favor of economic diversification and creative land use.

Speculative lending practices and the securitization of sub-prime mortgages were largely to blame for the 2008 financial crisis. The crisis was particularly severe in cities where the lack of liquidity in the financial system made it difficult for municipal governments to respond to the wave of foreclosures and resultant shrinking tax bases. With the worst of the crisis seemingly behind us it is time to reflect on its long-term impact on American cities. Perhaps the most extreme example of a city in crisis is Detroit. The city’s beleaguered finances proved to be no match for the global economic meltdown and in 2013 Detroit filed for bankruptcy. This part of the story is well known, but much less attention has been paid to the vision of Detroit’s future development around which a consensus among local elites coalesced in the year-and-a-half since bankruptcy was declared. While this plan retains some elements of out-of-the-box urban development programs, it dispenses with a growth-based strategy geared toward rejuvenating the city’s manufacturing base. Instead, it recognizes the likelihood of further economic decline and its emphasis is on improving the quality of life of Detroit residents, economic diversification and environmental sustainability.

In order to understand the willingness of policy makers in Detroit to relinquish the dream of returning to a golden era of Fordist manufacturing it is necessary to put the 2008 crisis in context. Like many American cities, Detroit is a casualty of the prolonged economic crisis that began in the 1970s. Auto manufacturers relocated production facilities to southern states and then overseas in an attempt to outflank organized labour and to counter a falling rate of return. The collapse of Detroit’s manufacturing base left the city’s finances in tatters, and policy makers responded by embracing market-oriented solutions that were in fashion in the 1980s. There was a broad shift in the United States during the 1980s, in which the primary function of municipal government went from managing day-to-day service delivery to fostering economic growth. To this end “growth coalitions” emerged in many cities. These coalitions practiced “growth machine politics” whose objective was to augment land value and attract inward investment. Public bodies assumed risk for large-scale urban development projects while private firms reaped the financial rewards. This led to a perception among investors that municipal bonds were safe investments that offered lucrative returns, so when Detroit’s municipal government sought to make up for its shrinking tax base by issuing bonds there was no shortage of willing investors. By 2012 Detroit’s deficit stood at $326 million while its tax base and population continued to shrink.

The textbook response to crisis in many cities has been to intensify neoliberal policies. Thus, when growth coalitions failed to attract investment or augment land value, the response has oftentimes been to offer even more favourable terms to investors while cutting back on services. This has led many scholars and activists to despair that while neoliberalism is the cause of the current crisis it is also perversely embraced as its solution. Many municipalities have indeed imposed fiscal austerity since the onset of the financial crisis as a means of attracting investment. Some of these cities may have fundamentally sound finances, and policy makers may view fiscal austerity as a short-term detour aimed at calming skittish investors. According to this reasoning the pain caused by austerity will be offset in the near future once the growth coalition is able to resume a cycle of development and growth. In the case of Detroit this optimism would have most certainly be misplaced because even the most aggressive version of fiscal austerity would not have reversed the city’s decades-long decline. This begs an obvious question: Why should a city endure the pain of austerity if further decline is inevitable from the outset?

Detroit’s elites decided that although austerity was in the best interest of extra-local creditors it promised to make life even more difficult for residents, and they decided to repudiate the city’s debt and take the historic step of declaring bankruptcy. By freeing the city of its debt burden bankruptcy has allowed Detroit’s future to be re-envisioned. A coalition among Detroit elites coalesced around this emergent vision, which is based on creative land-use, environmental sustainability and economic diversification. It is articulated in a 345-page document entitled Detroit Future City (DFC). It reads like a master plan and focuses on five “planning elements”: economic growth, land use, city systems, neighbourhoods, and land and buildings assets. Unlike entrepreneurial urban policies whose time horizons are measured in quarters and election cycles, DFC aims to rejuvenate Detroit’s economy in the course of the next five decades. The first step is to make the city liveable in order to stem the tide of out-migration, and to this end the plan calls for investments in neighbourhoods. Residents in neighbourhoods characterized by high levels of abandonment are encouraged to relocate to neighbourhoods with high population densities. Fordist manufacturing is rejected in favour of economic diversity, the single-family detached home is rejected in favour of densely populated diverse neighbourhoods, and in a major shift for the Motor City the plan envisions an efficient public transportation network. Perhaps the most noteworthy aspect of the DFC is “the re-imagination and reuse of vacant land for productive uses or, where there is excess vacant land, returning it to an ecologically and environmentally sustainable state.” The emphasis on sustainable land use is a significant departure from growth machine politics aimed at augmenting land value.

It is too early to tell whether the vision articulated in the DFC will be realized or if it will indeed guide policy for the next fifty years. Nevertheless, it is important to note that bankruptcy gave Detroit the opportunity to chart a new path. I refer to this as degrowth machine politics because it takes the further shrinking of Detroit’s economy for granted, and rather than placate creditors policy makers are focused on improving the quality of life for city residents. The concept “degrowth” is not new but it has historically been used primarily by activists and scholars because politicians do not win elections by campaigning for shrinking the economy. This is changing since the onset of the financial crisis because there are many places in which degrowth simply seems to be a reality that cannot be reversed by fiscal austerity. For example, elements of degrowth are beginning to enter mainstream policy discourse in southern Europe. Voters in Greece recently rejected fiscal austerity, and although this may jeopardize lines of credit from austerity-obsessed creditors in Brussels and Berlin it empowers Greek policy makers to focus on quality of life issues. Similarly, many cities in China are struggling to cope with sluggish economic growth that Xi Jinping has called the “new normal.” If the heady days of sustained 10% growth are indeed over and urban planners are unable to attract foreign investors or loans from state-owned banks, then they may be forced to respond to demands for quality-of-life improvements from their citizenry in more creative ways.

Detroit may provide lessons for degrowth coalitions elsewhere. First and foremost, Detroit demonstrates that the intensification of fiscal austerity is not the only response available to policy makers faced with an economic crisis. In spite of declaring bankruptcy Detroit was not punished by creditors. On the contrary, the repudiation of debt transformed Detroit into an attractive destination for investors. For example, Goldman Sachs launched an initiative to invest $20 million in Detroit’s small businesses. Quite simply, an institution that is unburdened by debt seems like a better investment than one that cannot hope to repay its debt without the support of a guarantor (in this case the State of Michigan). Second, the reason why Detroit is able to attract investment is because its degrowth machine politics has clearly articulated an innovative plan for the city’s future. The rejection of austerity for austerity’s sake must be accompanied by a clear set of policies aimed at managing decline in a way that makes cities more liveable. Thus, rather than an end in and of itself, the repudiation of debt must be seen as a means that can allow cities to envision alternative, sustainable and equitable futures.

This article is based on the paper ‘Detroit after bankruptcy: A case of degrowth machine politics’, in Urban Studies.

Seth Schindler – University of Sheffield
Seth Schindler is an urban geographer interested in rapidly growing metropolises in developing countries. He is particularly interested in theorizing urban transformation in these cities, which oftentimes cannot be explained by mainstream urban theory that was developed largely in Europe and North America. 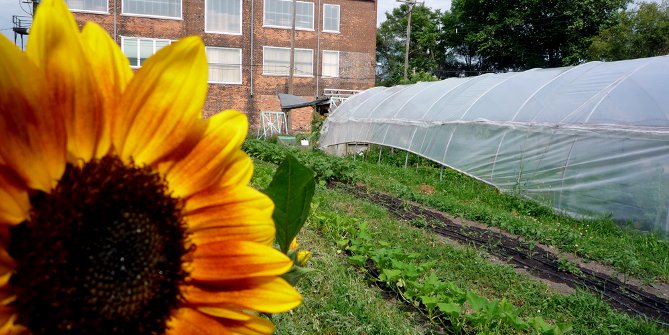