Will you become an All-Star Athlete? The answer may depend on when you were born.

Will you become an All-Star Athlete? The answer may depend on when you were born.

The idea that the size of your birth group affects your chances of success in life is not a new one. In new research, Alex Bryson, Rafael Gomez, and Tingting Zhang find that this effect also influences the chances of someone becoming an All-Star Athlete. Analysing the National Hockey League (NHL), they find that players born in times of higher birth rates suffer significant earnings losses relative to those born into smaller birth cohorts, and that these lower earnings are concentrated in players’ early seasons. They also find that players born later in the year are likely to be more successful than their earlier-born counterparts, and are 5 percentage points more likely to be a team captain.

Can the number of people born in the same year as you (i.e., the size of your birth cohort) affect your chances of success in life?  Or how about the month of year you are born in (i.e., your relative age), does that matter in terms of predicting success? If you are a professional athlete where success and performance can be pretty accurately measured, does any of this birth stuff really matter?

According to a growing body of research, the answer is decidedly yes.In the Easterlin hypothesis, the relative size of a birth cohort can affect an individuals’ economic and social outcomes; everything from your earnings, chances of being unemployed, getting into college, divorce and marriage, fertility, crime and suicide. Because cohort size determines the amount of competition for everything from college entry to job slots (slots that are assumed to be fixed in the short run and/or lagged in relation to cohort entry) this will feed through to a number of life-outcomes such as the ones listed above. The second idea that cohort size matters is derived from now classic papers in labour economics that have examined the effect of cohort size on earnings, which is more direct than Easterlin’s ideas and rely on an adaption of Sherwin Rosen’s optimal life-cycle model. 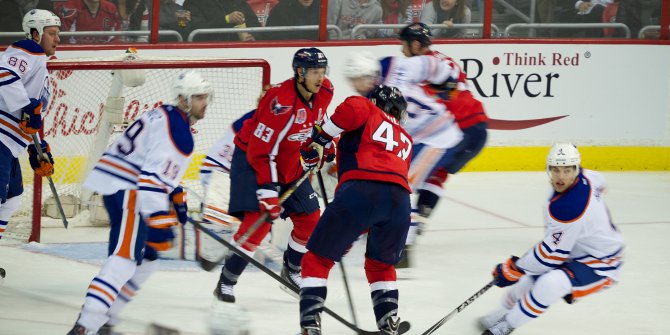 In keeping with this latter model, we believe the way cohort size affects professional athlete earnings follows from the notion that player careers consist of three distinct phases. A new entrant into a professional sport league arrives fresh from college or the minor leagues and enters their profession as an “apprentice” or “rookie” who learns from their more senior players and coaches. Only rarely – if the player is a superstar or enters the pro-leagues having played in foreign professional leagues – will they immediately become a full-fledged senior member of the team taking on tasks that are normally assigned to more senior players. Having entered as a rookie, the player gains skills and reaches their prime before their performance and learning plateau, at which point (after all learning is complete) they achieve veteran status in the league.

This view is essentially identical to optimal life-cycle models in economics in which a career consists of a continuum of stages and a worker solves for an optimal occupational sequence by recognizing that each occupational stage corresponds to learning options that affect performance in subsequent periods. The original models allowed productivity in each occupational stage to depend on the number of workers in that and other occupations, and it is clear that considering cohort size, the theory predicts that earnings are negatively correlated with cohort size, i.e., the bigger the birth cohort you are in the lower the average wage.

In new research we find that professional hockey players born in times of higher birth rates (see Figure 1 for the variation in birth rates across countries with the highest number of National Hockey League players) suffer significant earnings losses relative to those born into smaller birth cohorts.  Earnings are roughly 22 percent lower in the first three seasons for a player born in a higher than average birth rate cohort (>17.35 births per 1000), which is actually a level much lower than that seen at the height of the largest baby boomers in our sample. This effect persists but narrows from years 4 to 6 in the league and then achieves parity once players have spent 7 to 9 years in the league (the typical free agency window when a player can sell their services to the highest bidding team). But this catch-up period is not sufficient to make up for the earnings losses over the average span of a career of 4.5 years, which is 18 percent (see Figure 2). 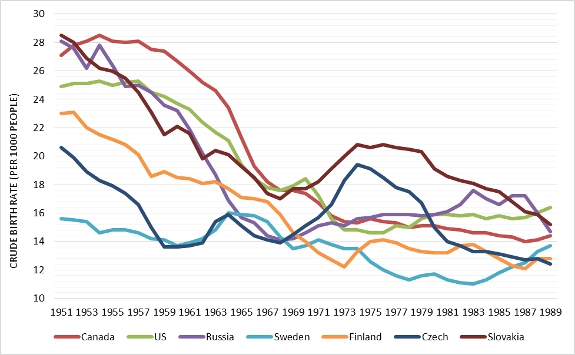 We then examine the channels through which unusually large birth cohorts could potentially affect career outcomes, focusing on career length (games played) and performance (point totals for non-goalies). We find that the earnings losses amongst large birth cohorts are accounted for by a combination of reductions in games played but we find no effect due to lower performance of large birth-cohort players: if anything the opposite was true in that performance was on average higher for players born during these above average birth cohort years.  This means that team owners are extracting what amounts to ‘a surplus value’ from large cohort players. 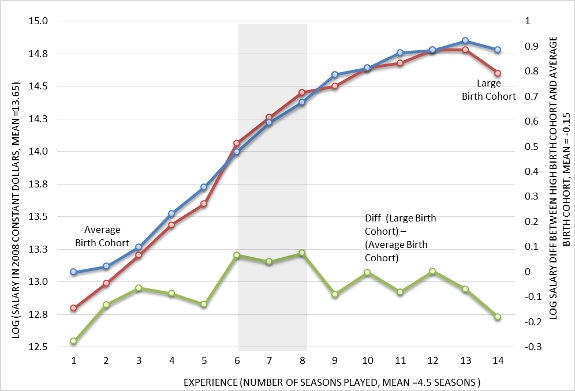 The answer to our second question – does your birth month matter — runs counter to the thrust of a majority of the literature – both academic and popular — in this area pointing to significant advantages accruing to players born earlier in the year (i.e., those with a higher relative age). Why might the performance of players depend on the relative age (birth month) of the athlete? First, selection into amateur athletics is typically conducted according to calendar year conditions – i.e., those born during a calendar year January to December are included in the same pool of those eligible to play on the same teams. Despite the potential of playing alongside someone who had almost a full year more of maturation, these systems still prevail in most amateur settings. This means that those born relatively early in the year (January to April) will face a distinct advantage over those born later (October to December) given the variation in physical and mental development that occurs up to a person’s late teens/early twenties. These differences could result in a differential opportunity to play with better teams and coaches, which could lead to better athletic career trajectories for early-born athletes.

On the other hand, something much of the existing literature on relative age has missed is that younger relative age players that make it into the professional leagues may benefit from the positive “peer effects” of playing alongside more mature teammates throughout their amateur careers. They may also have had to have been physically capable of keeping up with relatively older counterparts almost from the start of their amateur playing careers.

Whilst our data clearly confirms a higher prevalence of early birth month players in the NHL (see Figure 3) the career performance of these players is in fact statistically worse than later-birth month players. Though January-to-April born players have about a 2 percentage-point salary advantage in the first part of their career, this effect does not persist past the free agency years, when there is in fact a significant negative relationship between earlier relative age and earnings of 9 percent. Moreover, relative age is inversely related to point totals for non-goalies and career length as measured by total games played. Beyond this, the probability of captaincy in a team is also inversely related to relative age. A player born in the latter half of the year (from July to December) is 5 percentage points more likely to be a team captain than a player born in the first half of the year (from January to June). Later born players make better leaders it seems!

Figure 3 – Seasonality of births for NHL players and Canadian population as a whole, 1991-2008 averages. 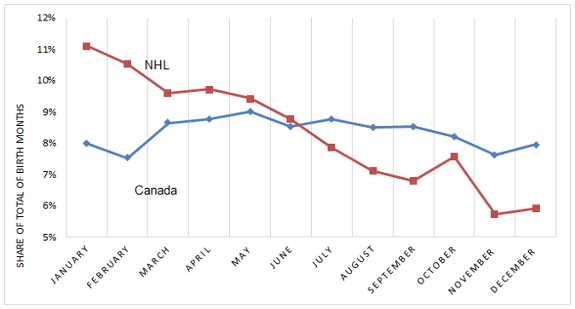 The fact that later born players outperform their early born counterparts is consistent with a number of theories that have been advanced in different contexts such as schooling and educational attainment. Selection into the NHL for those born in younger relative age categories is considerably harder given that these players have had to compete against more physically and mentally mature early born counterparts. Since most hockey players are born in jurisdictions where amateur team play is governed by calendar year births, those with initial physical and mental advantages are given preferential attention and opportunities. If a younger player can overcome not only these initial disadvantages but perhaps gain from having performed alongside more capable peers, then they should be expected  (conditional upon entry) to outperform the average player, who is typically drawn from older relative age categories (i.e., born between January and April).

One final twist, given the above findings, is that we find that those players with higher relative age (born in the first quarter of the calendar year) are relatively sheltered from the negative effects of greater cohort competition. A player that is born early (January to April) experiences significantly lower earnings losses than a player that is born late in the year (September to December) even if both were born in large birth cohorts. This means that players with greater relative age increase their chances of getting into the NHL and also have a slight advantage if born into a large birth cohort over their later born (younger) counterparts.

This article is based on the IZA Discussion Paper No. 8645 “All-Star or Benchwarmer? Relative Age, Cohort Size and Career Success in the NHL”.

Rafael Gomez – University of Toronto
Rafael Gomez is Associate Professor in Industrial Relations and Human Resources (University of Toronto). He currently holds a cross-appointment at Woodsworth College and the Centre for Industrial Relations and Human Resources. In 2006, he was awarded the Labour and Employment Relations Association’s John T. Dunlop Outstanding Scholar Award for exceptional contributions to international and comparative labor and employment research.  In 2013 he published The Little Black Book for Managers and in March 2015 his book Small Business and the City will be published by Rotman/UTP press.