Anti-Americanism in Arabic Twitter discourses is driven by perceptions of U.S. impingement in the region.

Anti-Americanism in Arabic Twitter discourses is driven by perceptions of U.S. impingement in the region. 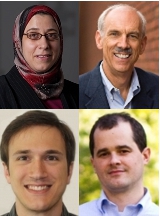 Recent years have seen very public expressions of anti-American sentiment in many parts of the Middle East. But are these sentiments driven by American actions in the region, or by the country itself? In new research, Amaney A. Jamal, Robert O. Keohane, David Romney, and Dustin Tingley use data from Arabic Twitter from 2012 and 2013 to investigate anti-American attitudes. By looking at reactions to the potential for U.S. intervention in situations such as the Syrian Civil War, they find that in the Arabic Twitter world, negative attitudes are driven by the perceptions of potential American social and political impingement. They also find that these negative attitudes can be directed at other impinging powers, such as Iran.

In spite of continued US involvement in the Middle East, simple questions about Middle Eastern attitudes towards the US have remained difficult to answer. Is it what the US does or what it is that spurs anti-Americanism? Is it US politics or US society? Substantial barriers contribute to a lack of answers. Middle Eastern governments obstruct studies on sensitive topics like anti-Americanism; in addition, events on the ground move swiftly, while traditional surveys do not.

To address these questions and difficulties, in recent research, we conducted a systematic analysis of attitudes towards the US expressed on Arabic Twitter during 2012–2013. Using a text analysis model developed by Harvard researchers, and with access to the Twitter Firehose through Crimson Hexagon, we investigated both general attitudes towards the US and responses to US-related events. There are limitations with using these data; they may over-represent the views of Arabs in Gulf countries, and they capture only the views of those “engaged” in these topics. However, we find that Arabic Twitter’s general attitudes towards the US are broadly consistent with public opinion surveys: Negative views outnumber positive three to one, and political topics are three times more salient than social (Figures 1 and 2).

Figure 1 – Total Arabic tweets by political and social category using all tweets in the world, plotted across time 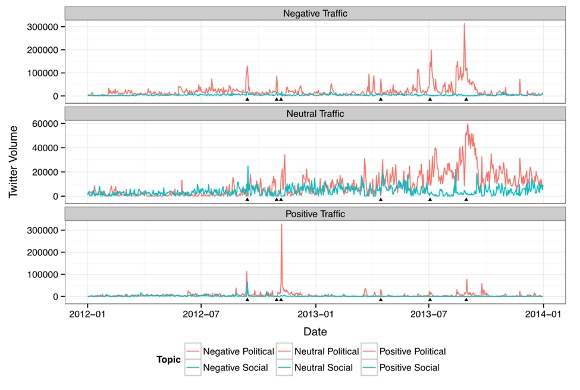 Figure 2- Estimated number of Tweets per category for general attitudes 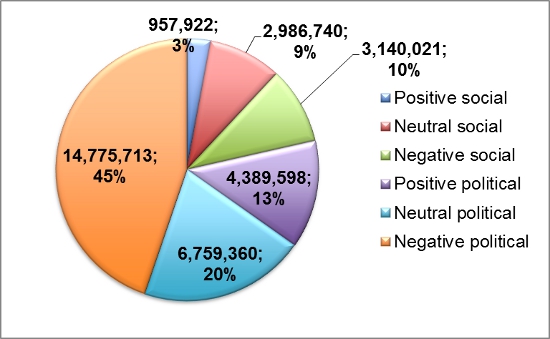 Inspecting these Tweets more closely, common themes emerged. Posts in the negative categories revolved around US political impingement and perceived hegemonic ambitions (political) or complaints about the influence of the West on culture and religion (social). In contrast, positive posts revolved around an admiration of US political institutions and leadership (political) and some Western norms and human rights (social). Both social and political topics seemed to spur anti-Americanism, but it was the level of perceived impingement, that differentiated negative from positive traffic.

To investigate further, we looked at US-related traffic in two situations of potential US impingement: Egypt’s military coup in 2013 and the Syrian Civil War during 2012 and 2013 (see Figures 3 and 4). Would our findings in these situations reflect the anti-impingement sentiment observed in general attitudes? Would either of the parties involved in these domestic disputes exhibit positive attitudes towards the US? Our analysis found sentiment much more negative than when looking at general attitudes: Negative posts were approximately ten to fifteen times more common than positive. Although there was variation in this sentiment across the domestic parties involved, negative sentiment predominated in all. And events that might indicate more US involvement—such as the chemical weapons attack in August 2013—seemed to spur higher levels of anti-Americanism.

Figure 3 – Total estimated number of tweets in each category for Egypt, omitting 515,257 posts with News/Neutral content 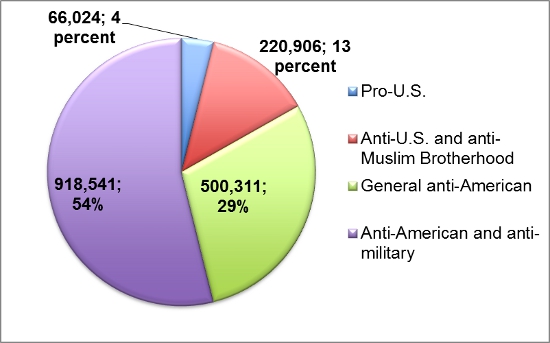 Figure 4 – Total estimated number of tweets in each category for Syria, split by date just prior to chemical weapons attacks 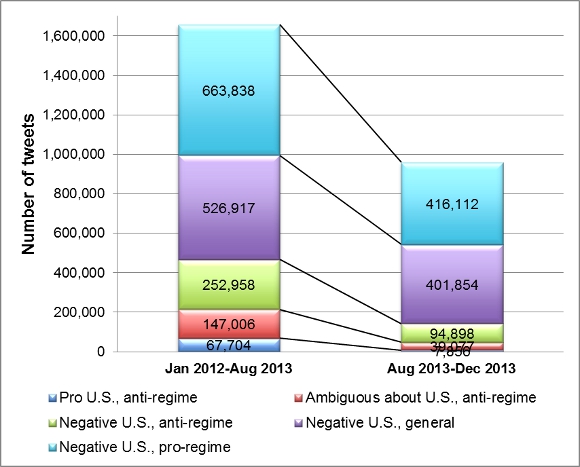 We moved on to investigate: How would the Arabic Twitter universe respond to “attacks” against Muslims versus the US? Would we find evidence for social anti-Americanism? We first looked at reactions to the anti-Islamic “Innocence of Muslims” film, which, though produced by a Coptic Egyptian, was largely perceived as a US attack on Islam. Our analysis (Figure 5) found strong evidence that Arabs wanted the film ignored (44 percent) and supported its censorship (36 percent). But there was little evidence of condemnation of American society in general. Second, we looked at reactions to the Boston Marathon Bombings, with a US target and Muslim perpetrator (Figure 6). In this case, although a significant number of Tweeters expressed sympathy for the victims of the attack (9 percent), most thought that events in the Middle East and the backlash against US Muslims after the attack were more important (73 percent). Some even supported conspiracy theories implicating CIA or FBI involvement (15 percent). However, when we examined a third situation where the perpetrator was not Muslim—reactions to Hurricane Sandy—our findings were much more positive (Figure 7). There were still Tweeters expressing joy at the destruction (14 percent), as well as Tweeters who viewed this event as unimportant (32 percent). But many expressed concern for or defended Americans against those taking joy in the attacks (13 percent), and significant numbers praised Obama’s handling of the event, which they often compared with Middle Eastern leaders’ detachment (25 percent). 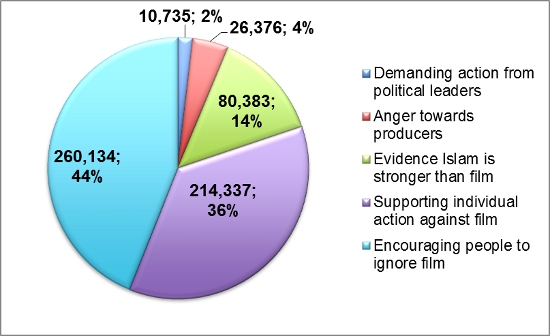 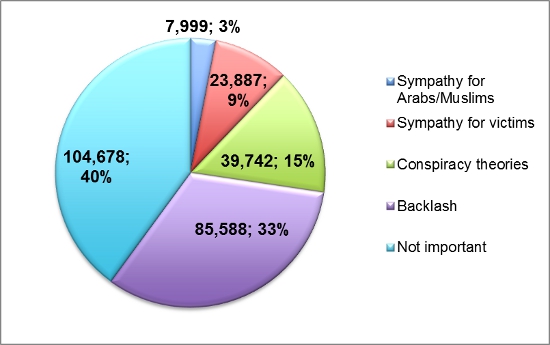 Figure 7 – Estimated number of Tweets per category for Hurricane Sandy 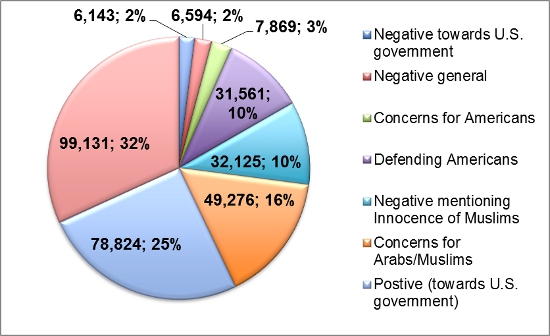 But how would these findings extend to foreign, non-Western entities that impinge on the Arab Middle East? We chose to look at Iran, a power who fits this description well (see Figure 8). Our findings with relation to Iran are in some ways similar to what we found with the US—negative sentiment (72 percent) clearly outweighs all other traffic. However, in contrast to the US, there was so little positive sentiment that it was impossible to estimate a percentage for it. Whereas views towards the US display a degree of ambivalence, views towards Iran clearly do not. 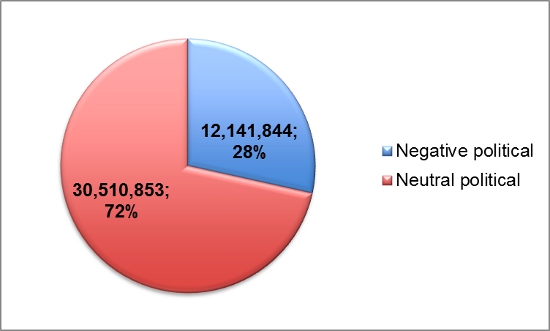 The evidence from our analysis is clear: In the Arabic Twitter universe, perceived social and political impingement drives negative attitudes towards foreign powers. These negative attitudes are directed not just at the US but also other impinging powers—in particular Iran. Our findings illustrate that anti-Interventionist reactions are an important phenomenon—one that will be difficult for states like the US to control through its traditional military and organizational strength, and which therefore creates new foreign policy challenges.

This article is based on the paper ‘Anti-Americanism and Anti-Interventionism in Arabic Twitter Discourses’, in Perspectives on Politics, and is now available ungated.

Amaney A. Jamal – Princeton University
Amaney A. Jamal is the Edwards S. Sanford Professor of Politics at Princeton University and director of the Mamdouha S. Bobst Center for Peace and Justice. Jamal also directs the Workshop on Arab Political Development. She currently is President of the Association of Middle East Women’s Studies (AMEWS). The focus of her current research is democratization and the politics of civic engagement in the Arab world. Her interests also include the study of Muslim and Arab Americans and the pathways that structure their patterns of civic engagement in the U.S. Jamal’s books include Barriers to Democracy, which explores the role of civic associations in promoting democratic effects in the Arab world (winner 2008 APSA Best Book Award in comparative democratization); and, as coauthor, Race and Arab Americans Before and After 9/11: From Invisible Citizens to Visible Subjects (2007) and Citizenship and Crisis: Arab Detroit after 9/11 (2009). Her most recent book Of Empires and Citizens was published by Princeton University Press, Fall 2012.

Dustin Tingley – Harvard University
Dustin Tingley is the Paul Sack Associate Professor of Political Economy in the Government Department at Harvard University. His research interests include international relations, international political economy, experimental approaches to political science, and statistical methodology. Dustin is currently working on new experimental projects on bargaining, attitudes towards global climate change, new methods for the statistical analysis of causal mechanisms and textual data, and a book about the domestic politics of US foreign policy.