Legislative polarization in the U.S. is near all-time highs, yet we still have only a dim understanding of its sources (to say nothing of its possible consequences).  One view is that voters are to blame for the rise in polarization—that the changing preferences of voters, or at least some subset of voters, has led to more extreme members of Congress.  Primary voters, in particular, may hold more ideologically extreme views.  Indeed, at least anecdotally, cases of primary voters nominating more extreme candidates appear to be on the rise, starting with the “Tea Party Revolution” of 2010.  These anecdotes raise the question: What happens when extremists win primaries?  My recent research attempts to answer this question in the context of the U.S. House. I find that when parties nominate a more extreme candidate, then that candidate is 37 percent more likely to lose the general election compared to one that was more moderate.

To investigate what happens when extremists win primaries in a systematic manner, we need to overcome two central empirical obstacles.  The first obstacle is that we need a principled, broadly applicable method for estimating the ideologies of candidates, even though many primary-election candidates never serve in office (and thus do not cast any roll-call votes).  Building on work by Adam Bonica, I use the mix of campaign contributions that primary candidates in the U.S. House, 1980—2010, receive in order to estimate their ideology.

The second obstacle is that districts do not nominate extremists randomly—indeed, districts tend to nominate extremists (of one party or the other) because their voters prefer extremists.  When we look at the association between a nominee’s extremism and her general-election vote share, we find a relatively flat relationship because of this selection bias.  To overcome this bias, I focus on close primary races between a more moderate and a more extreme candidate, approximating an “experiment” in which districts are randomly assigned one type of nominee or the other.

Combining these two approaches, I am able to measure the consequences of nominating extremists.  In contested primary elections for the U.S. House where the party nominates an extremist over a more moderate primary candidate, it is roughly 37 percentage points less likely to win the general election than if it nominates the more moderate candidate instead.  There is a huge on-average penalty to nominating extremists.

Figure 1 shows this effect.  On the horizontal axis, I plot the vote-share winning margin of the extremist candidate, among primary elections between an extremist and a more moderate candidate.  When this variable is above 0, the extremist wins the nomination.  On the vertical axis, I plot the party’s resulting general-election vote share.  As we see in the plot, as the party goes from just barely nominating the more moderate candidate (to the left of zero on the horizontal axis, as indicated by the vertical line), to just barely nominating the more extreme candidate, there is a pronounced downward jump in the party’s general-election vote share. 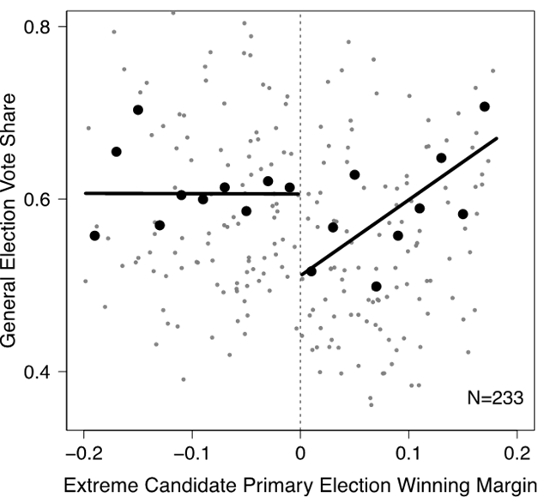 Considering exactly what these results mean is important.  The effects I estimate are the “total” effect of nominating a candidate who has chosen to take more extreme positions.  The penalty might be the result of general-election voters behaving in a manner consistent with the spatial model, preferring more moderate candidates because of their ideological positions, or it may not be the direct result of spatial voting at all.  Candidates whose positions look more moderate may also be of higher quality, may have the support of elites in the district, and may differ in many other kinds of ways from those who choose to take more ideologically extreme positions.  The strategy of looking at close elections ensures that the estimated effects are not confounded by the unobserved differences between districts, but it does not parse out the mechanisms of the overall effect of nominating extremists.  While my research offers several pieces of evidence that the results are indeed spatially driven, readers should approach any such mechanism analysis with caution.

But we can still learn much from the overall pattern of results.  Regardless of the mechanism, the results show the types of candidates that general-elections advantage.  If we think that the ideological composition of the legislature is an important component of the political process, then the penalty to extremists is important whether or not the actual mechanism is ideological in nature.

My findings lead to two main conclusions.  First, regardless of primary voters’ preferences, they are unlikely to be able to “force” extremist candidates into office.  Second, the general election filters aggressively for candidates who hold more moderate positions.

Why, then, do Democratic and Republican incumbents diverge so much, ideologically? In my ongoing book project, I argue that we have missed a key factor in the ideological divergence of candidates and, as a result, in the growth of polarization.  Most of our explanations for polarization focus on the changing demands of voters; I focus instead on the changing supply of candidates.  Building on the citizen-candidate model, I argue that when the costs of running for office are high, and/or the benefits of holding office are low, the supply of candidates will become more ideologically extreme.  I employ a variety of analyses that find strong support for this candidate-supply theory.  And because, as I argue, the costs of running have gone up (because of increased fundraising burdens, media scrutiny, and more) and the benefits have gone down over the past few decades (because of rising opportunity costs in non-legislative careers, among other factors), the candidate supply has helped lead to the high levels of legislative polarization we see today.

Figure 2 illustrates this dynamic.  In the figure, I plot two time trends.  The lower line plots legislative polarization over time.  I measure polarization as the estimated ideological distance between each party’s median in the legislature, using Bonica’s CFScores as my measure of ideology.  The upper line represents candidate-supply polarization, i.e., the distance in ideology between each party’s median non-incumbent candidate in each election cycle.  As the plot shows, candidate-supply polarization mirrors legislative polarization closely.  At the same time as incumbents in the U.S. House are becoming more extreme, the set of candidates voters can choose from are also becoming more extreme. 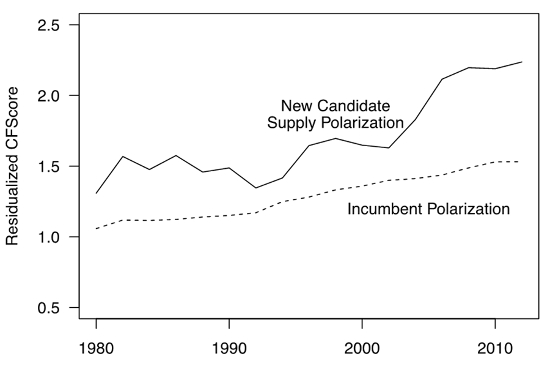 Elections are the key mechanism by which voters control their representatives in a democratic society.  To understand how, and to what degree, voters succeed in constraining the behavior of those to whom they delegate power, we need to understand how they go about choosing representatives for office.  In my research I shed light on one small part of this much broader process.  When voters in closely contested primary elections nominate a more ideologically extreme candidate, the general election strongly penalizes their choice.  As a result, the general election is a strong filter on the candidate supply, sending to office those candidates who, on average, are more moderate than their opponents.

But the power of voters to select for ideologically moderate candidates is limited.  Voters can only choose from among those people willing to run for office in the first place.  Thus, while they may choose to support relatively moderate candidates, in times when the candidate supply is extreme, they will have no choice but to elect a relatively extreme candidate.  To understand the root causes of polarization, as well as to understand the electoral process more generally, we need to examine not only the way voters choose among candidates, but the way citizens choose to become candidates.

This article is based on the paper: ‘What Happens When Extremists Win Primaries?’ in American Political Science Review and on Andrew Hall’s upcoming new book: ‘The Candidate Supply: How the Costs and Benefits of Running for Office Shape the Democratic Process’.

Andrew B. Hall – Harvard University
Andrew B. Hall is a Ph.D. candidate in the Department of Government at Harvard University and an affiliate of the Institute for Quantitative Social Science. Starting this July, he will be an Assistant Professor in the Department of Political Science at Stanford University.  Hall’s work appears in the American Political Science Review, the American Journal of Political Science, the Journal of Politics, and Legislative Studies Quarterly, among other places.  His applied research studies the links between American electoral institutions and the behavior of elected officials in the legislature.  For more information, please see andrewbenjaminhall.com.  You can follow Andrew on Twitter @andrewbhall.