Every election cycle, voters are told by pundits and commentators that this particular election counts and that it is likely to shape public policy for decades to come. In new research, Anthony Fowler and Andrew B. Hall find that elections definitely do have consequences; for example, a barely elected Republican is 40 percent more likely to vote conservatively in Congress than a Democrat would have. They also find that because of legislators’ ambitions and the advantage of incumbency, one election result can influence the future results in that district for more than a decade.

Before every major election, American voters are told that the upcoming race is “more important than ever” (e.g., here and here). Candidates, pundits, and the press alike harp on the important issues that will be taken up by the government in the next session—issues like health care, voting rights, taxes, sexual equality, national security, the budget deficit, etc. To excite the interests of voters, these opinion leaders often claim that the outcome of the current election will shape the outcomes of these policy debates, not only today but far into the future. Are they right? Do elections hold sharp and far-reaching consequences for policy?

In new research, we confirm that they do. In particular, we show that voters’ choices to elect Democratic or Republican candidates for their districts dramatically alters the representation they receive. Put another way, voters in a given district will see their representative cast dramatically different roll-call votes if they elect a Democrat instead of a Republican, or vice-versa. Since policy results from the aggregate behavior of individual representatives, our findings illustrate how elections as a whole affect the policy process.

Figure 1 below illustrates the stark choice American voters face in a typical legislative election. The vertical axis plots the Conservative Vote Probability for members of the U.S. House in the 110th Congress (2007-2008), indicating, on average, how often each member voted conservatively on roll call votes relative to the median member of Congress. The horizontal axis plots the vote share received by the member in their most recent election. The discontinuity in roll-call voting as a district switches from barely electing a Democrat to barely electing a Republican provides an estimate of the average effect of election results for roll-call representation, and this discontinuity is substantively large. On average, a barely elected Republican is about 40 percentage points more likely to vote conservatively on a given bill than the counterfactual Democrat that would have represented that district had the election tipped the other way, and we find similar results for the Senate and state legislatures. Therefore, elections indeed have large consequences for policy and the way that an electorate is represented. 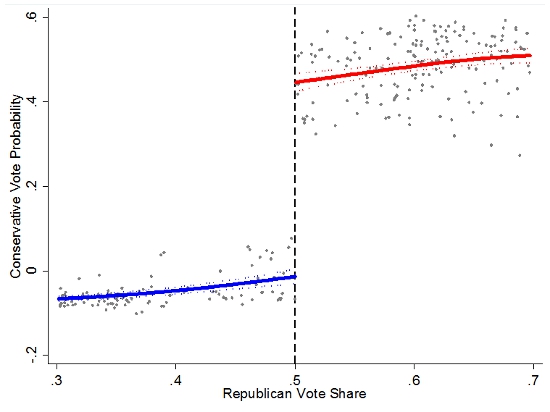 Barely elected Democrats and Republicans behave very differently in Congress, suggesting that a district’s choice to elect a Democrat or Republican can have large consequences for policy and representation.

Even the above analysis significantly understates the consequences of a single election result. Yes, elections are important for determining policy and representation throughout the next term. But these effects could persist even further through time, because of the well-known phenomenon of “incumbency advantage.” For reasons that are still poorly understood, we know that close election results significantly influence subsequent election results. When a party or candidate barely wins office as opposed to barely losing office, they are much more likely to win subsequent elections. This means that election results today don’t just influence representation and policy over the next electoral cycle, they might influence representation and policy over many cycles spanning decades.

Figure 2 below measures these long-term consequences of elections results for subsequent roll-call representation. The graph presents our estimated effect of an election result on roll-call voting at various terms after the initial election. At 0 terms downstream, to the left of the plot, we confirm what we already saw in the previous figure. However, looking across the plot, the effect of an election result in the U.S. House appears to persist for at least 5 or 6 terms downstream, meaning that a single U.S. House election result influences the way a district is represented for 12-14 years (term 0 comprises the first two years after the election, term 1 comprises years 3 and 4, etc.). Again, we find the same general patterns for the Senate and for state legislatures. In fact, for the Senate, and for the lower chambers of state legislatures, the effects of a single election persist for approximately three decades. 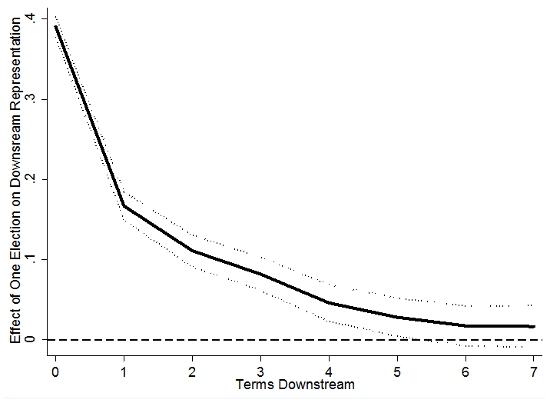 The effect of a single election result persists for at least 12 to 14 years.

We think this finding is so striking that it bears repeating. A district’s choice to elect a Democrat or Republican today influences the way that district can expect to be represented for over a decade. So in 2016, when voters are reminded of the importance of their congressional and state legislative races, they should also consider that their choices could influence policy and representation not just in 2017 but also in 2027 and perhaps even 2037.

How can these effects persist for so long? The long-term consequences of election results appear to be explained by several important factors that we explore in our research. First and foremost, legislators typically seek long careers in office, and the combination of these career ambitions and a large personal incumbency advantage, means that a very close election today, where voters are essentially indifferent between a Democratic and Republican candidate, can lead voters to continue reelecting that same person repeatedly. At the same time as these legislators serve long careers in office, perhaps even representing moderate districts that don’t agree with many of their policy positions, they continue to cast roll-call votes in the same way that they did at the beginning of their careers. We might expect that senior legislators continue to be reelected precisely because they alter their behavior to match the district, but we find no evidence of this, explaining why the divergent effects of election results on roll-call votes are so large and persistent.

Representation in American legislatures is both divergent—voters must choose between two stark choices that are more extreme than the median voter’s preferences—and persistent—the consequences of this choice last for decades. Furthermore, the phenomena that we uncover at the state or district level have important consequences for aggregate policy, which can remain consistent over many electoral cycles even when the preferences of voters are far from those of their elected representatives. So when the pundits warn voters that the upcoming election is important, they may be even more correct than they realize.

This article is based on the paper: ‘Long-Term Consequences of Election Results’ in the British Journal of Political Science.

Andrew B. Hall – Harvard University
Andrew B. Hall is an Assistant Professor in the Department of Political Science at Stanford University.  Hall’s work appears in the American Political Science Review, the American Journal of Political Science, the Journal of Politics, and Legislative Studies Quarterly, among other places.  His applied research studies the links between American electoral institutions and the behavior of elected officials in the legislature.  For more information, please see andrewbenjaminhall.com.  You can follow Andrew on Twitter @andrewbhall.

August 11th, 2015|Andrew B. Hall, Anthony Fowler, Elections and party politics across the US|0 Comments
Previous post Next post