In the past five decades federal spending has continued to grow at a significant rate, and yet at the same time government employment has remained relatively flat. Donald F. Kettl takes a close look at this relationship, writing that much of the trend is down to the interweaving of federal programs with private organizations, such as the provision of Medicare by private health insurance companies. He argues that this interweaving is important, because the complex programs it produces can lead to more waste, fraud and mismanagement, and that they can also create challenges for improving public trust in government, as it becomes less directly connected to citizens.

In the United States, government is built on paradox. Balancing the quest for liberty with commitment to a government strong enough to solve public problems has never been an easy one for the nation, but in recent years the paradox has become even sharper. To meet citizens’ rising demand for solutions to their problems, policy makers have created more government programs; in an effort to keep government small, they have interwoven the implementation of governmental programs ever more deeply into the private and nonprofit sectors. This, in turn, has deepened the paradox by blurring the lines between individual liberty and government authority, increasing the complexity of public administration, and making it harder for the government to deliver on its pledge to promote the general welfare.

Nothing captures this fundamental truth better than the often-repeated, but nonetheless true, tale of an angry senior citizen who pleaded, “Keep your government hands off my Medicare.” That demand is full of governance paradoxes. Medicare is, of course, a government-funded program, but almost none of the program’s recipients and providers ever encounter a government employee. Almost all of the federal government’s program managers manage government’s payments to private-sector health care providers, who in turn are paid by private-sector financial intermediaries who receive their funds from the federal government. It is a hidden-hand program, with service recipients many times removed from government.

Together, Medicare and Medicaid account for 22 percent of all federal spending, but the federal agency that manages these two programs accounts for just 0.2 percent of all federal employees.Any change anywhere in the Medicare program has vast implications throughout the health-care system, so each of the approximately 5,720 employees in the Centers for Medicare and Medicaid services (CMS), who administer the two programs and related activities, has enormous impact over the entire system.

Interweaving is increasing, especially at the federal level. Figure 1 shows millions of dollars of government spending per 1,000 government employees. At the state and local level, the relationship between spending and employment has been relatively flat, because the number of state and local government employees has grown at roughly the same rate as government spending. This is because most state and local spending is through programs that employ large numbers of government employees: police, fire, sanitation, prisons, colleges and universities, among others. On the other hand, federal spending has grown enormously but employment has been relatively flat—an increase of just 8 percent from 1962 to 2012, despite the creation of the Transportation Security Administration, which brought aviation security into the federal government and created an enormous new agency. The same number of federal employees is leveraging a far larger amount of spending. This is because the big growth in federal spending has come through entitlements.

Figure 1 – Changes in US Government Spending and Employment 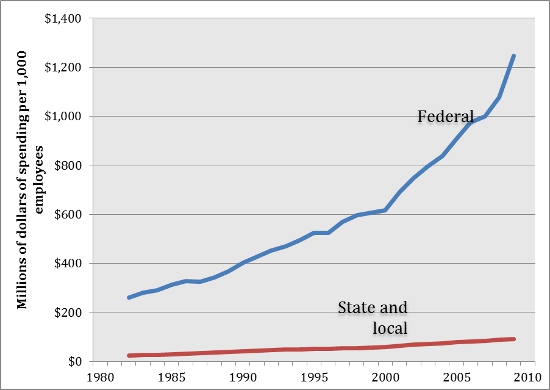 Of course, inflation has driven up federal spending during this period. But consider Figure 2. In 2014, each federal employee on average leveraged twice as much government spending as in 1981, even after accounting for inflation. 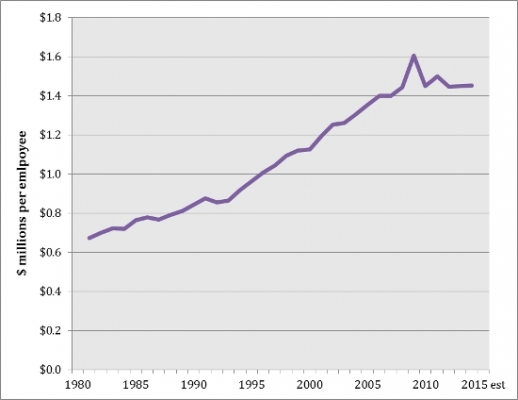 The interweaving of federal programs varies tremendously by agency. As Figure 3 shows, some agencies that directly provide goods and services, like the Bureau of the Census, the Transportation Security Agency, and the Veterans Health Administration, have relatively more employees for their budget. The same is true for many regulatory agencies, like the Food and Drug Administration (FDA), most of whose budget goes to pay the salary of its workers. For agencies that run transfer programs, like the Internal Revenue Service (which its tax credit programs), Social Security Administration, the Office of Personnel Management (with its retirement programs for federal employees), and the Centers for Medicare and Medicaid Services, a tiny number of employees leverage vast sums of money. In fact, CMS leverages more than 3,000 times as much money as the Bureau of the Census. Thus, not only is interweaving widespread; the degree varies greatly through the federal government, with a handful of agencies responsible for truly enormous leverage of federal resources. Even in regulatory agencies like the FDA, where almost all of the budget goes to pay employees, the decisions by small numbers of federal administrators leverages vast amount of private-sector activity. There is no drug or medical device on the market that does not have the FDA’s imprint on it. 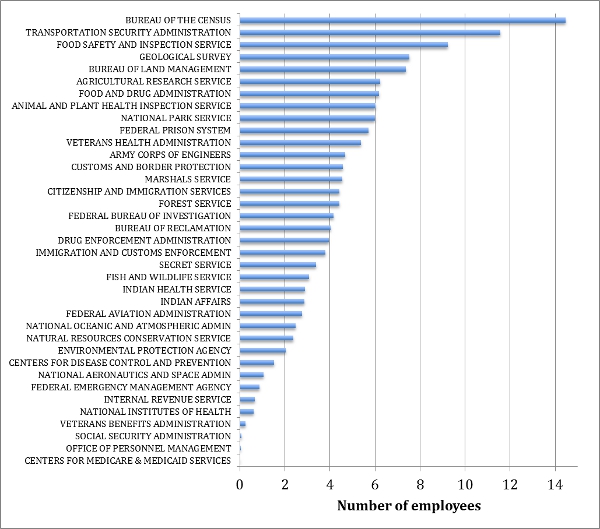 Why does this matter? Consider two large implications. First, the interweaving of public policy creates performance problems. The rapid growth of interwoven federal programs has been associated with growing problems in governmental performance. Of the U.S. Government Accountability Office’s 2013 list of 30 “high-risk programs” most prone to waste, fraud, abuse, and mismanagement, all but four involve interwoven policy strategies. Interwoven programs are more complex to manage.

Second, the rise of interwoven programs creates challenges for improving public trust in government. The evidence here is more suggestive than definitive, but multiple points of data point in the same direction: The more connected citizens are to government, the more citizens trust that government. On the other hand, as the federal government’s connect to citizens has become more indirect, the more trust has declined.

These trends pose a profound puzzle for government in the 21st century: How can we best equip it to do the job that, with more or less enthusiasm, we expect it to do? Two things seem most apparent in solving this puzzle. First, government’s capacity is increasingly out of sync with the job we ask it to do. The public management reforms that government officials have launched have not closed the gap. Second, if government is to be strengthened to do its job, there is a fine balance in making it strong where it needs to be strong without becoming so muscular as to inhibit individual liberty and entrepreneurial energy. That is a puzzle that government has yet to attack forcefully, let alone solve.

The federal government’s biggest performance problems come from problems in managing relationships across boundaries, from creating robust financial and performance management systems, and from building human capital systems that connect the right people with the right skills for the jobs to be done. This is a profound challenge for public administration, but it is also an unmatched opportunity to build a public administration that enhances and perhaps even redefines democracy for a globalized and interwoven world.

This article is based on the paper, ‘The Job of Government: Interweaving Public Functions and Private Hands‘ in Public Administration Review.