In the wake of the September 11 terrorist attacks nearly 14 years ago, Arab Americans came under heightened suspicion and greater counter-terrorism surveillance. Has this changing relationship with law enforcement affected Arab Americans’ levels of confidence in the police? In new study which looks at attitudes of Arab Americans in Detroit, Ivan Sun & Yuning Wu find that their attitudes towards police have been mostly unchanged, with more than 40 percent expressing a ‘great deal’ or ‘a lot’ of confidence in the police. They argue that local police departments’ efforts to establish solid rapport with Arab communities may have contributed to maintaining these high levels, and illustrate the importance of building these types of links in order to establish and maintain public confidence in policing.

The September 11, 2001 terrorist attacks have transformed the landscape of American policing.  The aftermath, including the war on terror, the heightened public suspicion of Arab Americans as terrorists, the political and economic backlash and hate crimes against Arab Americans, and the enhanced governmental counter-terrorism powers, has resulted in a special relationship between Arab Americans and law enforcement agencies.  This relationship is highlighted by the concern of police carrying out appropriate and effective counter-terrorism activity without infringing upon individuals’, especially Arab Americans’, civil liberties.

Despite their new visible status under the intensive counter-terrorism surveillance and investigation, Arab Americans have given quite positive evaluations of local police forces in recent surveys.  Our analysis of data from the 2003 Detroit Arab American Study (DAAS) found that 40.1 percent and 45.4 percent of the respondents said they had “a great deal” and “a lot” confidence in local police, respectively.  These numbers were in line with the 2003 U.S. national data showing that approximately 90 percent of Americans reported having a great deal or some confidence in the police.

Have Arab Americans’ levels of confidence in the police changed since 2003?  The answer is not really.  In a 2014 survey conducted in metro-Detroit, we found that Arab-American respondents continued to express favorable ratings of their police.  When asked the same question about their levels of confidence in the police, 40.6 percent of respondents said “a great deal” and 36.2 percent said “a lot”.  As shown in Figure 1, the 2003 and 2014 data were virtually identical in the first (“ a great deal”) and last response categories (“none at all”).  Compared to the 2003 statistics, the 2014 data showed a lower percentage in the “a lot” category (45.4 percent v. 36.2 percent) but a higher percentage in the “not much” category (11.1 percent v. 19.8 percent).  However, these differences were not statistically significant, meaning that Arab Americans’ confidence in their local police remained largely unchanged over the past decade in metro-Detroit. 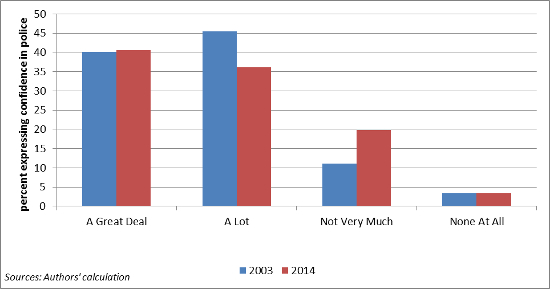 Due to limited empirical data, we don’t know how many Arab Americans in other parts of the country may hold similar or different views of the police from their counterparts in metro-Detroit.  Metro-Detroit has one of the largest, oldest, and most concentrated Arab expatriate populations in the country.  Arab communities there are highly institutionalized with effective community organizations, political prominence, and general support from benefactors.  Local Arab Americans’ historical experiences of discipline (e.g., being watched, doubted, and asked to prove the loyalties) and inclusion (i.e., being incorporated, recognized, and rewarded for participation in the American mainstream system) may make them both resilient and highly adaptive to crisis, and subsequently fared much better than those in other cities after the 9/11 attacks.  Furthermore, local police departments’ efforts to establish solid rapport with Arab communities via various community policing and other programs, proactive patrol strategies to protect Arabs and their neighborhoods right after the 9/11 attacks, and cautious decision to avoid active involvement in federal investigation of terrorists may also have paid off in terms of maintaining high levels of confidence in the police.

Studying police relationships with minority communities, including Arab Americans, is very important.  Tragic incidents in Ferguson, New York, and Baltimore are just some examples of how use of deadly force and bias policing could be detrimental to perceived police legitimacy, police accountability, and relationships with local residents.  Recent arrests of dozens of U. S. citizens, including some Arab and Muslim Americans, who allegedly try to join ISIS, emerged as a new source of potential conflict between Arab communities and law enforcement agencies.  Police agencies serving Arab communities in the Detroit area should be complimented for garnering strong confidence from local residents, but they must continue to reach out to Arab communities and avoid overly aggressive activities or behaviors that target immigrants and/or Arab communities.

Public confidence in the police is fragile, difficult to build, yet easy to destroy.  Federal and local authorities should work hard to establish and maintain public confidence by, for example, working with existing community-based organizations to promote community networks and efficacy, increasing residents’ mutual trust and cohesion, decreasing social disorganization and disorder, and attracting external capital building institutions.  Strong Arab communities benefit not only local law enforcement but also the entire of U.S. society.

This article is based on the paper ‘Arab Americans’ Confidence in Police’, in Crime & Delinquency.

Ivan Y. Sun – University of Delaware
Ivan Sun is a professor in the Department of Sociology and Criminal Justice at the University of Delaware.  His research interests include police attitudes and behvaiors, public evluations of criminal justice and international and comparative crime and justice.  He has published three books and over 70 refereed journal articles on numerous outlets in criminology, crimianl justice, sociology, social work, political science, and public administration.

Yuning Wu – Wayne State University
Yuning Wu is an associate professor in the Department of Criminal Justice at Wayne State University. Her research interests include policing, fear of crime, and victimization. She was a recipient of the W.E.B. Du Bois Fellowship by the National Institute of Justice in 2014, and the Dorothy Bracey/Janice Joseph Minority and Women New Scholar Award by the Academy of Criminal Justice Sciences in 2015.