Long Read: Trump’s threats of violence against protestors reflect a racist order defined by nationalism in US history.

Long Read: Trump’s threats of violence against protestors reflect a racist order defined by nationalism in US history.

This week, in reaction to the unfolding protests across the US in the wake of the killing of George Floyd during his arrest in Minneapolis, Minnesota, President Trump likened the unrest to ‘domestic terror’, and vowed to ‘dominate the streets’. Christopher Putney writes that Trump’s rhetoric is the latest expression of a racial order that has been ever-present in American political development, and always defined Blacks and other people of color as a threat to a white ethnonational identity.

The aggressive reaction by the president to protests and the civil unrest gripping Washington, D.C., since the killing of George Floyd is not an aberration from Donald Trump’s typical approach to governance, as some recent high profile criticisms of the president have implied. Instead, the ongoing spectacle in the nation’s capital this week––replete with growing numbers of National Guard troops in full riot gear, shuttered storefronts, and District-wide curfews––is a product of the US’s racial order as formulaic as the president’s nationalist rhetoric.

The problem with framing Trump’s responses to the surge of protests burgeoning across American cities as something exceptional for the administration––instead of as an outcome of its defining features––is that doing so obscures precisely how predictable those responses are given the historic role of white supremacy in American political development. Indeed, the president’s calls this week, in both off-the-record and public remarks, for the “domination” of protesters characterized as the “organizers” of “terror,” are only the most recent manifestations of an otherwise traditional set of claims defined by racial ideology, and which have long been at the center of American politics.

Racial Order in US History

To be sure, earlier iterations of what leading scholars like Rogers Smith and Desmond King have labeled the “white-supremacist” or “antitransformative” racial orders have been active––even predominant––in American politics since the country’s 18th century founding. But if, as Columbia historian Barbara J. Fields has argued, ideology should be understood empirically as a “distillate of experience,” America’s endemic racial structures have always supplied justifications for racial domination linked to state violence––as well as the impulse for its eradication. 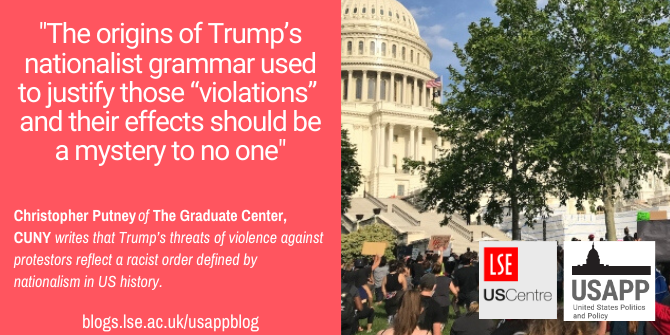 Some of these claims have been implicit in state and federal policy and the rhetoric of political elites across American history, and many have been comprehensive and overt. Yet all are linked, at a basic level, to the central question that has animated racial conflict in the United States since its inception: who may be counted as members of the political community, and what rights or privileges are they entitled to by virtue of that membership? For white supremacists of every era (and in both political parties) the answer has been some version of Stephen A. Douglas’s infamous formulation––that the American polity was “made by the white man, for the benefit of the white man, to be administered by white men.”

At the earliest, and probably most wide-ranging historical juncture, white rule spelled an emergent “proto-nationalist” identity forged amid the revolutionary zeal of the 1770s––an embryonic nationalism that would cement the roles of women as the subjects of patriarchal rule, and the subhuman statuses of enslaved (and free) blacks and Native Americans. Such conditions––despite early anti-slavery (and broader egalitarian) efforts––were then codified, and ultimately made absolute in the supposedly egalitarian America of Thomas Paine. Citizenship reforms in the wake of the Constitution’s 1788 ratification a decade later, during Reconstruction’s collapse in the 1870s, and especially in the early Progressive years (roughly 1890-1920), merely recapitulated this pattern: An empowered, predominantly white and Protestant, national identity would be challenged by forces of egalitarian reform, and then decisively reinforced in law and custom––often under the auspices of constitutional arguments, claims about the rule of law, and elite invocations of American “culture” or “heritage.”

The different phases of these evolving racial orders––“egalitarian-transformative,” “white supremacist,” and more recently, “antitransformative” or conservative––have always been an undercurrent in American politics. While they may be less visible amid the day to day of policy debates and shifting electoral coalitions––and to the corresponding partisan, social, and economic arrangements that have occurred in different eras––they remain elemental in configuring the very structure of those arrangements. The authority of a given racial order, Smith and King show, may “shift” in different ways at different times––for instance, with the 1863 legal emancipation of slaves, or the passage of the 1964 Civil Rights Act––but their tectonic presence “beneath” American politics remains with us today.

Looking at American history through a racial orders framework emphasizes that the constructed categories of race as such––often deployed to limit the rights of would-be (Black and other people of color) citizens––have been omnipresent in American political development in ways overlooked by scholars, citizens, and political leaders of all stripes. Racial orders, in all their evolving phases, have thus constrained the broader opportunities for national governance that every president negotiates as they work to exploit the political contingencies of their place in history.

Politicians and groups working to stop meaningful reform and transformation––the political heirs of the bipartisan, enduring, and adaptive white supremacist tradition––include factions of the modern Republican Party, the sitting president, various conservative interest groups and elite commentators, as well a jumble of other institutional and “non-institutional” actors. But notwithstanding new “race-neutral” rhetorical tendencies, these groups––like their predecessors––all still make claims, wittingly or not, which are linked to enduring racial structures.

As I argued here recently, this more coded ideological continuity (e.g., conservative arguments for “color-blindness” in policy-making) is most visible in Trump’s on-going critiques of “globalism,” immigration, and minority groups that began with his 2016 campaign.

Phrases like “a national security crisis on our southern border,” “an invasion of drugs and criminals coming into our country,” and “unknown Middle Easterners,” remain ideological shorthand for the story long recycled by illiberal nationalists: that ethnic and religious minorities in the US––or those said to be invading––are endangering “traditional” American identity as well as “law and order.”  “The Wall”––new southern border fencing––in that story, just like the “Wuhan virus” in recent months, serves as a symbol of the problem of otherized (non-white) groups, and implies a federal solution. Executive Order 13769, the first iteration of the so-called “Muslim ban,” like the policy of separating migrant children from asylum-seeking families, are only the most overt examples. Trump’s 2017 Inaugural Address, as well as later speeches given at the United Nations, merely integrate anti-globalism with the themes of racial order and immigration that are at the heart of “America First,” and are understood as the president has repeatedly presented it since taking office––as a “governing vision.”

The signal themes of this nationalism were reiterated this week by the president on Twitter, and especially, in a Rose Garden speech in which the president threatened to “deploy the United States military”––“thousands and thousands of heavily armed soldiers”––against overwhelmingly peaceful protests.

Despite the presence of military vehicles and police on virtually every downtown street, during the last 72 hours the scene viewed from up-close has consisted of non-violent––if tense––gatherings near the White House. The demonstrators I met there held signs emblazoned with slogans like “We will not be silenced”, and “All lives cannot matter if BLACK lives don’t”. In one march from La Fayette Square down Pennsylvania Avenue that numbered in the thousands, the demonstration ended at the southwest steps of the US Capitol, where protesters chanted “take-a-knee,” and “who-do-you-protect?” to police officers clad in shields and protective body armor. 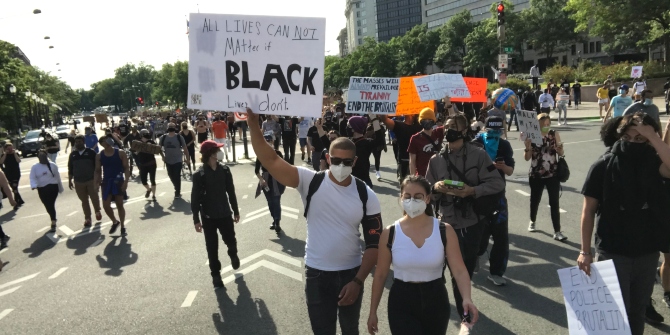 Yet the president’s most vocal appeals this week have moved beyond the demonization of immigrants and racial minorities, to open justifications of state-sanctioned violence. During Monday’s remarks at the White House––with the sounds of flashbangs and tumult in the background as police and National Guardsmen forcibly cleared protesters from La Fayette Square––Trump likened the protests to domestic “terror.” He averred, in a series of war metaphors, that his “mission” to “dominate the streets” would prevent the further “spilling of blood” in American cities. And, as demonstrators were forced westward down H Street amid exploding smoke canisters and “pepper balls,” Trump affirmed himself as “your President of law and order and an ally of all peaceful protesters.”

What this rhetoric and the on-going urban militarization efforts in the District share are hallmarks of a common racialized heritage – the inheritance of an illiberal nationalism which has sustained, in successive versions since the colonial period, America’s enduring racial orders. For modern antitransformative figures like Trump, like earlier open white supremacists, the ever-present political subtext is that non-white “outsiders” or their allies––be they legal citizens or otherwise––are, at minimum, a threat to “national security,” “law and order,” and an ethnonational identity defined by white supremacy––and at maximum subhuman, and thus not entitled to the protections of the law that citizenship bestows.

Of course, the terms of the president’s Rose Garden speech and his decision to invoke extraordinary sources of authority for militarizing law enforcement in the District, have received wide-spread criticism––ranging from activists, academics, and local leaders, to former and current Cabinet Secretaries. In a recent interview, Abby Dobson, an Artist-in-Residence at the African American Policy Forum and the President of the National Organization for Women (NOW-NYC), reinforced these rhetorical themes, commenting that the “president’s actions in the wake of George Floyd’s killing should give us all pause,” since the “use of military force to quell principled protest…should not be the first response to a nation of souls hurting and reeling from the aftershocks of another Black person unjustly killed by the hands of police…without regard for the sacredness of Black lives.”

Echoing Dobson, LSE’s Peter Trubowitz has recently observed that “more and more Americans” may “speak out against the clear violation of First Amendment rights and the provocative display of presidential overreach” playing out in the District. True enough. But the origins of Trump’s nationalist grammar used to justify those “violations” and their effects should be a mystery to no one.

That grammar merely reiterates that racial order and ideology in American politics––especially when wedded to presidential power––are patterns ripe for reproduction, not aberrations without precedent.