Since 2010, the U.S. has experienced divided government, with the Democrats holding the White House, and The Republican Party controlling the House of Representatives, and since January, the Senate. In new research which analyses the passage of 2,200 bills from 1949 to 2010, Tyler Hughes and Deven Carlson find that divided government slows down the legislative process by 60 days, on average. This delay is made even worse when the level of party polarization is higher, which makes partisan compromises even more difficult.

Divided party control of policymaking dramatically increases the time it takes to enact important legislation.  These legislative delays are even greater when the two parties are ideologically polarized. In the U.S. federal government, the typical legislative environment consists of one party holding the presidency, the other party controlling one or both chambers of Congress, and a massive ideological gulf between the parties.  Although this environment imposes significant legislative hurdles, many important bills are eventually passed into law.  However, such bills often take a very long time to progress through the legislative process, which undermines the government’s ability to quickly tackle important policy problems. In new research, we find that high levels of party polarization exacerbates the problems of divided government, slowing down the legislative proves by a significant amount.

Divided government happens when one political party controls the presidency and the opposition party maintains a majority in at least one chamber of Congress, as is the case now, with the Republicans controlling both the Senate and the House of Representatives after last November’s midterm elections.  This is the norm in contemporary U.S. politics:  Divided government defined 11 of the 14 two-year congressional sessions since 1989.  At the same time, the ideological division between the parties increased steadily starting in 1970 and has continued up to today’s historically high levels of party polarization.  Together, these factors create a difficult environment for the creation of public policy in Washington.

Some political scientists argue divided government does not affect the number of significant laws passed over time.  Other research indicates periods of divided government and high ideological polarization between the parties act separately to decrease the production of significant laws.  This scholarly debate offers important insight into how the political environment shapes the final policy outputs of Congress, but this line of research ignores how long it takes public laws to be passed.

Understanding how political factors, like divided government and party polarization, influence the length of the policy process is important because long, drawn-out political battles draw the ire of the general public, fostering distrust of policymaking institutions.  These legislative battles also limit the ability of Congress to address other policy problems, because lawmakers have only so much attention to devote to issues.  Even if a significant piece of legislation is passed into law, the excess time and debate required to pass that law can problematic for lawmakers and society more generally.

The Patient Protection and Affordable Care Act of 2010 (PPACA) is one such example.  The original bill for this historic policy change was introduced on September 17, 2010, but the president did not sign the law until March 23, 2010—187 days later!  The congressional agenda was highly constrained during this time, because debate over the PPACA began long before a bill was introduced, forcing congressional lawmakers to focus most of their attention on a single issue.  The vitriol around this bill and its sluggish progress did not escape the public eye, and, according to Gallup, public approval of Congress dropped from 31 percent to 18 percent over this period. The end result of this process was a bill most experts regarded as imperfect.

Keep in mind this law was passed while Democrats controlled the presidency and held a majority in both chambers of Congress.  Such periods of unified government likely result in quicker passage of legislation, because the party in power encounters few, if any, legislative hurdles.  On the other hand, divided government causes a host of political and institutional problems the parties must overcome if either party wishes to achieve any of their respective legislative goals.

Divided government weighs down the policymaking process because it requires compromise between the two parties.  Democrats and Republicans must reach some modicum of agreement to create public laws, and it goes without saying there is little common ground between the parties in the current political context.  The enormous ideological division between the parties intensifies any barriers to legislative compromise.

Our results show the mere presence of ideological polarization does not affect the time to enactment for important legislation.  Instead, the level of party polarization conditions whether or not divided government influences the pace of the legislative process. As Figure 1 shows, at low levels of polarization, party control of government does not impact how quickly (or slowly) important bills pass.  When the parties are close together ideologically, consensus across the aisle becomes a realistic goal in spite of the presence of divided government.  This dynamic relationship changes as the ideological distance between the parties grows. 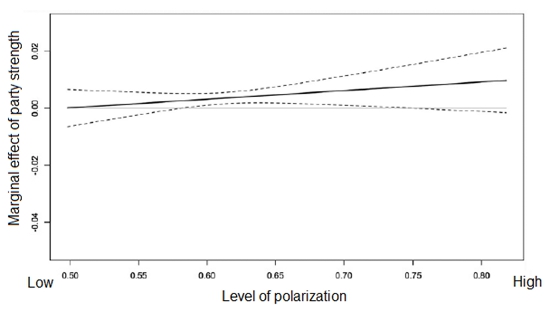 The results of our analysis do not paint a pretty picture for future legislative outcomes.  Divided government will be a political reality until at least 2017, and the trend of increased ideological polarization between the parties is expected to endure well into the future. Given these circumstances, the slow, cantankerous policy process in Washington should continue with important policies taking longer and longer to work their way through Congress.

This article is based on the paper ‘Delay in the Legislative Process: Evidence From Important Bills, 1949-2010’, in American Politics Research.