There are more than 100,000 veterans in U.S. prisons, but until now, little has been known about their mortality rate. In new research drawing on new data from the National Corrections Reporting Program in three states, Jeremy Luallen finds that veterans admitted at younger ages have an increased chance of dying, while those who are admitted over the age of 40 have a lower probability. He writes that the next step for researchers is to look at how and why veteran inmates die.

Currently we know nothing about the mortality rate of incarcerated veterans in the U.S. The reason is simple – the data have never existed.  Each year the Bureau of Justice Statistics, under congressional mandate, collects and reports mortality statistics for prison and jails across the country.  These reports describe circumstances of death such as time, location, illness, decedent characteristics, etc., but they do not separately identify veterans.

This lack of data does not reflect a lack of interest by the public.  There is ongoing, though limited research exploring the intersections between the mental and physical health needs of veterans, the services they receive before, during and after incarceration and health outcomes related to justice system involvement.  And while research has described the potential for links between military service, psychiatric conditions, risk factors for suicide, health conditions and health services for those in custody, no studies have so far answered the simplest questions of, “How many veterans die in custody?  How? When? And Why?”

Motivation for this issue comes from considering how policies and practices might be informed by the study of veteran mortality.  For example, if it were true that veterans are more likely to die in custody, we might ask whether there is a disconnect in the transition of healthcare at incarceration between, e.g., the Department of Veteran Affairs and the correctional institution.  We might consider whether and how veterans’ courts should consider health risks as part of their decision-making model.  Studies might tell us whether segregated housing makes it easier for states to serve veterans’ health needs and whether separating veterans from high-stress environments improves or worsens mortality by its very nature.  Despite the obvious policy importance of such investigations, the lack of data has prevented us from assessing and responding to the potential needs of this special population.

Though we are not yet in a position to answer many of the most important questions, a recent expansion of the National Corrections Reporting Program (NCRP) has paved the way for new empirical examination.  The NCRP compiles prisoner-level data on admissions and releases into and out of state prisons across the country, including releases by death.  Importantly, veteran status was added to the data collection in this most recent year, making it possible to now estimate and compare mortality for incarcerated veterans and nonveterans.

Unfortunately, jail populations are not yet a standard part of this data collection; however, since the vast majority of deaths in custody occur in prison, the description is significant.  Also, because this enhancement is so recent, only three states (Georgia, Michigan and Pennsylvania) have provided enough historical data to appropriately describe veteran populations.  We report data from these states though more data will undoubtedly become available in the future.

What should we expect to find?  The answer is not clear but several possibilities exist.  As older inmates, veterans are more likely to develop health problems.  As inmates serving longer sentences, they may be more likely to contract communicable diseases and illnesses common to prison settings e.g., Hepatitis and HIV. Conversely, as a higher educated population and as VA healthcare beneficiaries they may have had better access to healthcare in the years before incarceration.

Table 1 – Distributions of Characteristics of State Prisoners in 2004, by Veteran Status 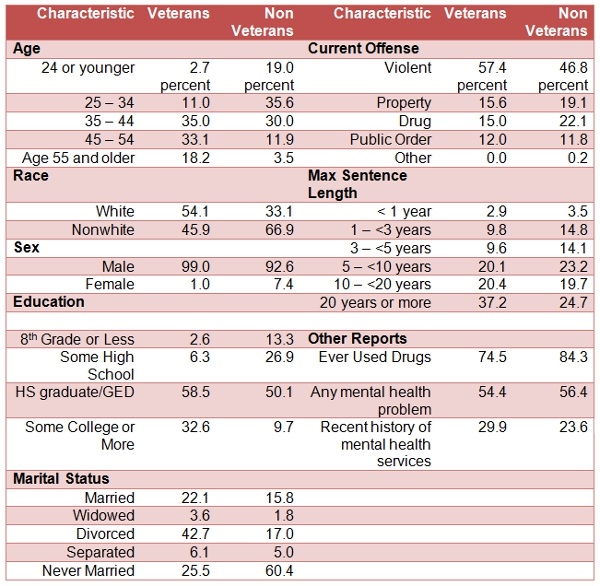 Comparing veteran and nonveteran death rates unadjusted for age is uninformative.  Unadjusted estimates of mortality show the rate of death per admission is four times higher for veterans compared to nonveterans, largely because veterans are simply older on average and, as such, face a greater natural risk of dying.   We estimate age-adjusted mortality statistics by stratifying subjects into narrow age bands and comparing differences within groups.  Defining these groups is challenging.  Ranges that are too narrow do not provide large enough samples.  Ranges that are too broad make comparisons uneven. 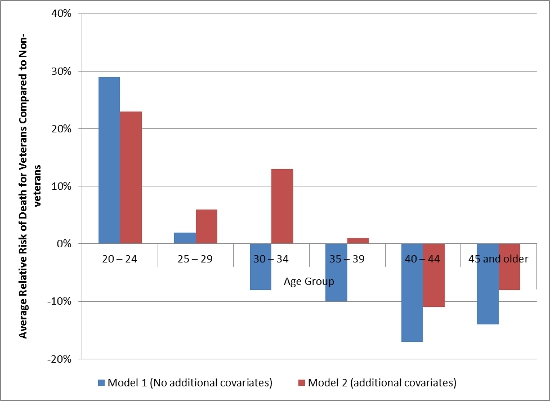 Note: Model 1 is age-adjusted with no additional covariates.  Model 2 is age-adjusted model with covariates for race, sex, education, offense, prior incarcerations and controls for state and decade of admission.
Source: 2012 National Corrections Reporting Program Data.

Results also suggest a possible trend in relative risk over age groups.  Point estimates show veterans entering prison at younger ages face a greater relative risk of death, with an increased risk of death as high as 23 to 29 percent, though limited power restricts our ability to know this definitively.

Figure 2 translates hazards to predicted probabilities of death, and shows the difference in the probability of dying between veterans and non-veterans across the age groups and length of time in prison. Predictions represent the average offender at each observed time where values vary over time according to observed changes in the data.  Most importantly, veterans and nonveterans are made to look otherwise identical in every comparison.

Figure 2 – Difference in Probability of Death between veteran and non-veterans by time spent in prison. 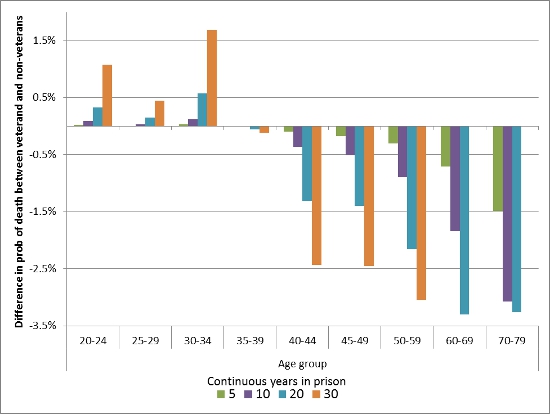 Figure 2 shows that veterans admitted at the youngest age have a 1.1 percentage point higher probability of dying over a 30-year period (5.83 percent compared to 4.76 percent).  This translates to roughly 11 more deaths per 1,000 admissions for veterans compared to nonveterans.  Older admission groups show the opposite relationship.  Prisoners admitted between the ages of 40 and 59 have lower probability of death over a 20-year period of between 1.3 to 2.1 percentage points; or between 13 to 21 fewer deaths per 1,000 admissions.

These results do not explain the mechanisms by which subgroups have higher/lower mortality.  Rather, they should be viewed as hypothesis generating.  Perhaps improved health is the result of improved health care in the years before prison.  Perhaps differences across ages reflect differences in the nature of military service between veteran cohorts.  This evidence should also be regarded as exploratory rather than as definitive because of the limited sample and statistical power.  However, given the total lack of extant knowledge on this topic, framing these analyses as exploratory does not diminish their value.

Many important questions still remain. How do these results change for a national sample?  How do they differ in jail settings?  Are there additional associations between mortality and conditions such as traumatic brain injury and post-traumatic stress disorder?  What are the causes of death and what patterns can we observe?  Current limitations of the data do not allow for more extensive analysis, however future data collections will provide opportunities.  Ultimately the importance of these findings can only be weighed by the importance of future discoveries made within this line of inquiry as inspired by these early results.

This article is based on the paper, ‘On the Prevalence of Veteran Deaths in State Prisons’, in Criminal Justice Policy Review.

Jeremy Luallen – Abt Associates
Dr. Luallen is an economist with Abt Associates Inc., a public policy consulting firm in Cambridge, MA, and is a faculty member at Tufts University.  He specializes in quantitative research and policy analysis, including research in criminal justice.  His latest research focuses issues related to prison populations and prison population growth and has also been featured in the Wall Street Journal.